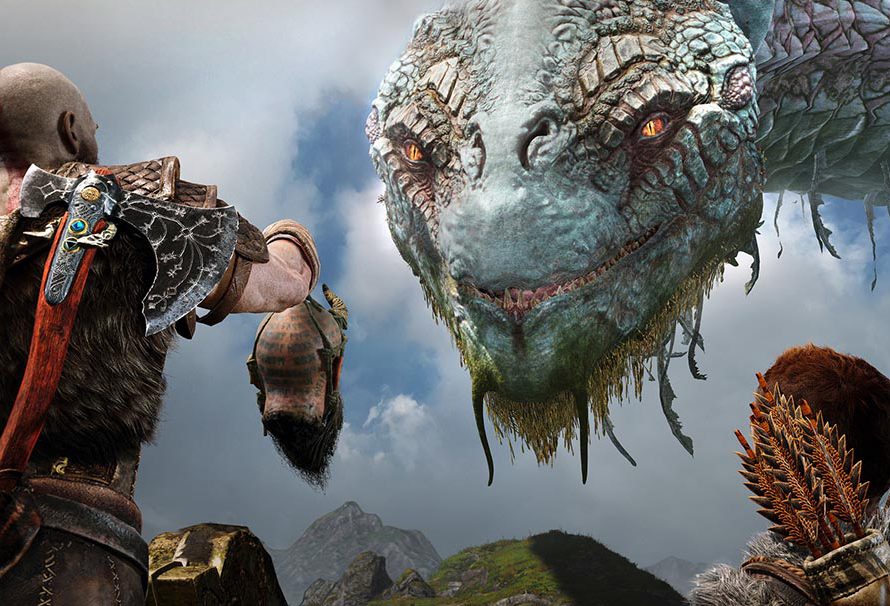 I had a freelance artist friend who worked from home a lot, and he watched copious amounts of Let’s Plays whilst working. If I had a day off or came over in the evening, I’d bring my Playstation and I’d play whilst he worked and watched. A live Let’s Play, so to speak. There was one game however, that he could not just watch casually. One game that couldn’t be appreciated with cursory glances at the tv screen in-between drawing and sketching. This game was so noisy, so loud, so spectacular and grand, he just had to jump on the sofa, grab a beer and enjoy it in all it’s glory.

This was God of War, of course.

Kratos spends his first trilogy fighting the Greek pantheon of gods, as revenge for the actual god of war Ares making him kill his own wife and child. Unlike that other Greek hero Hercules, Kratos didn’t want to atone for this by doing some menial tasks for the gods. He just wanted revenge. Pure, emotional, blood-splattered revenge. The final game in that trilogy ends with Kratos killing Zeus (spoilers), and damning the world to darkness and nothingness. His revenge is complete at the cost of pretty much everything, his selfish revenge has brought everyone else down to his level, and is he happy now? Who knows.

The story goes as far as it needs to to justify the mad and awesome action in the game. Climbing up titans to stab them in the eyes, going down to Hades and essentially wiping out the Underworld, ripping off Helios’ head to use it as a lamp and even taking out Atlas so he drops the sky. The action is a mixture of hack and slash with various weapons like Hercules’ fists and Hades’ claws, and QTEs for the set-piece moments. This is the game series that made everyone think QTEs were awesome, until everyone else ruined them. It revelled in how over-the-top it was. My friend just couldn’t get enough of how crazy it was to be killing gods in this fashion, it was a throwback to the mad and bonkers 80s action movies of our childhoods.

Now though, Kratos has a beard. Not some pointy, edgy, early-2000s, combine-with-Oakley-sunglasses-and-a-black-shirt beard, but a full, old man beard. He walks and paces like a boxer instead of doing his normal hunched predatory run, his voice is calm and full of caution, and only seems to roar when fighting, rather than whenever he’s frustrated with another annoying puzzle section. All his stolen legendary weapons are replaced by his one axe, and he teaches his son patience, “You are hunting deer, not chasing it.” Yes this is the same Kratos. And yes I did say son.

As Hollywood knows all too well, child characters can eek out the humanity of a protagonist who has none; Terminator, Logan, Leon, all have a stoic, violent man being accompanied by a normal child who they end of caring for and even enjoying the ‘small things’ with and other clichés. Games have started to do it with The Last of Us, and it’s honestly a potent mechanic. Doubly-so when the character you’re playing has this absurd, violent history and is wandering the Earth reflecting on what he’s done. Kratos’ whole raison d’être has been revenge for his family that he killed, and now he’s got a second chance at doing the whole bereavement thing, this time with less apocalyptic rage.

So why is Midgard such an appropriate setting for this potential redemption? Well Kratos has felled one pantheon out of rage, and now he wants to be left well alone with his new family. If there’s any group of gods who have a reputation for messing with people, it’s the Norse gods. Odin goes to Midgard as an old cloaked man with one eye, Loki plays tricks and Thor strikes people down with lightning. The gods have to be impressed to let you into Valhalla, they want you to fight and spill blood – they would love younger Kratos. You can imagine that Kratos will want to be left the hell alone, his quest is to take his wife’s ashes to the top of the tallest mountain with his son, but Odin et al will surely not resist the urge to interfere. Not to mention creatures like the frost giants, ogres, Fenrir and Jörmungandr, the giant wolf and the world snake, both children of Loki.

Whereas the Greek mythos is well documented and expansive, with a large cast of titans, gods and demi-gods, Norse mythology is a more fluid thing. Most of it comes from stories (sagas), epic poems and what was left behind. There’s a mysticism there where we don’t really know what’s what, and the gods were mysterious in nature – a lot of the tales about them involved some form of deception, trickery and untrustworthy wanderers. It’s why Loki is such a prominent figure, an anti-hero and trickster, rather than a villain.

This is to say that, as we journey more deeper into Kratos’ psyche than ever before, as his more complex layers are revealed, it’s fitting that he probably won’t just be pinning someone’s godly nuts to the top of the parthenon with his Blades of Revenge. I can’t see new Kratos taking their crap, but he may even be above them now. He may match wits with Loki as much as he matches strength with Thor. He’s not going to want to endanger his son by going toe-to-toe with them all, so he’s going to be on the defensive for the first time.

Any gamer who grew up playing God of War and loving the violence and the high-octane set-pieces will be happy to know it seems to remain, but they will also be happy to know that, 10 years on, it’s doing more than that. The transition from Greece to Midgard for me at least visualises a turn in the series into the more multi-dimensional. Kratos’ long-term grief and remorse, his son, his desire to be left alone from the world lest he do more things he’ll regret, and now just wanting to complete his wife’s dying wish, make him way more interesting, and sticking a character like that in the realm of the Norse gods seems like the cruelest but most intriguing thing Santa Monica Studio could’ve done.