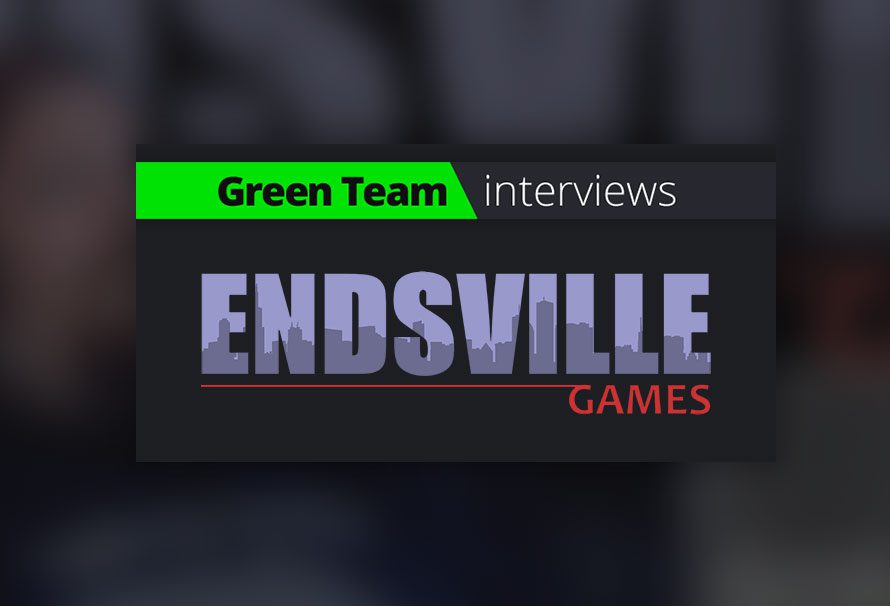 I’m sitting in a wingback chair, a bottle of water and two glasses sit on a table in front of me, untouched. Instead, a steaming cup of coffee is in it’s place, as with the man opposite. We sip our drinks, and I start to ask him a series of questions in our very first Green Team Interviews. The streamer is Endsville_Games, moustache and video game extraordinaire, here to give you his tips on how to become a Let’s Player and grow your channel.

What kind of gamer would you describe yourself as?

I would definitely say I’m a core gamer; I play a lot of different games, from massive AAA titles to obscure indie gems. I play some games more (and more passionately) than others, but I do it to have fun or explore new concepts; I don’t focus on how to “git gud”. I enjoy occasional multiplayer games with friends, but I’m not extremely competitive, and you won’t find me playing some sort of deathmatch vs randoms.

What made you decide to start streaming/making videos?

I originally made my Twitch account a couple of years ago, mainly to engage as a viewer for the dev streams of Project Spark, Microsoft’s game creation tool/game, which is sadly long dead now. As a part of that community, I ended up watching a few fellow creators and very rarely doing short streams to share what I was working on. Eventually, I decided to actually take a look at other streamers to get some tips for another game I enjoyed playing, and… well, I enjoyed the live content and interaction.

Embarking on an epic journey of discovery through the hazardous realm of Twitch, I followed many streamers and became a solid part of a few communities. As many viewers do, I began toying with the idea of trying this streaming thing myself – initially, I had the typical delusions that this would lead to fame and fortune, but quickly realized that wouldn’t happen. I honestly struggled with it for some time, because it was definitely something I wanted to do, but dealing with anxiety and depression made finding motivation difficult. Eventually, I found a streamer who spoke openly about his own depression, and (unknowingly) inspired me to seriously consider how I could make an effort myself.

Having learned from observing other streamers, I got the basics set up – alerts, chat bot, panels, suckered a few friends into joining my new Discord server, etc. – and forced myself to announce a schedule. Thus began a wonderful rollercoaster of emotions, learning and many good friendships. I’ve been streaming for about 10 months now, taking things slowly in order to balance real life and streaming, and I am honestly loving it! The feeling of building a community, and people actively showing up to hang out, is amazing.

You can take 3 games with you to a desert island, which ones do you take and why?

Umm… Yahtzee, a deck of cards, and chess? I could half-heartedly grumble at dice rolls, play solitaire and slowly actually learn to play chess against myself rather than a skilled opponent.

That is, of course, unless we’re talking about the kind of desert island with electricity and a working gaming PC. In that case, I’d probably go with XCOM 2 (with my usual 200+ mods, please), one of the later Civilization games, and Stardew Valley – those should provide hundreds, even thousands, of hours of entertainment with plenty of randomly-generated variety and some useful, totally realistic, real world farming tips to survive on the island.

What tips would you give to a content creator trying to break 500 subs?

I’ll have to admit it feels a bit strange answering this question, as I am not at that level myself. My channel is a small one, with around 320 followers at the time of writing this [He now has 635]. I launched a Gamewisp channel in March of this year, and have a dozen subscribers there, plus a handful of Twitch affiliate subscribers. I’m very happy with the level of success I have had so far, though – slow and steady and all that.

First and foremost, I would stress the importance of consistency. If you have a consistent theme, it gives a professional impression, and a consistent schedule makes it easy for viewers to follow your content and make a habit of visiting your channel. When life gets in the way – and it will – communication is important; let your followers know as early as possible if there will be a change of plans, whether it’s a one-time thing or for an extended period.

Engage with, acknowledge and appreciate your community. I do my best to keep up with chat while I’m streaming, show appreciation for each new follow (even though that can be hard when Twitch spams you with autofollows!), and offer quite a few rewards to my Gamewisp subscribers to acknowledge their support. I also recently started hosting a monthly movie night, open to everyone on my Discord server, where I let people add movies to a list and have my misanthropic chat bot select the movies randomly. A lot of people I know have regular multiplayer events, subscriber-only or not. Try to think of something fun that people want to take part in.

Even with a hard goal in mind, appreciate what you already have without getting complacent – always look for ways to improve your content.

What advice would you give to someone who wants to try their hand at streaming?

Also, do your research first. Use Google, get an idea of the basic requirements. You don’t need a studio microphone or even a webcam, but you will need some way to broadcast your content, which means getting some streaming software if you’re on PC. A lot of streamers (of course, not all) are more than happy to provide tips and help with setting up your stream, but it doesn’t hurt to take a look at the basics before you ask. There are plenty of tutorials out there.

On the technical side, keep in mind that streaming is quite CPU-intensive; if your computer isn’t a complete beast, accept that you may not be able to stream the hottest newest games. Do some tests and have a friend watch, and/or take a look at your VOD after the stream.

Networking is a thing. If you plan to make a serious effort, getting to know people is a key element of channel growth. Hanging out in other streams, Discord servers (by the way, get one of these for yourself – it’s free, and a great way to interact with your community off-stream), etc., will help you build relationships and get your name recognized. If people like you, and realize you also stream, they will tend to show up. Even if you’re new, hosting other streamers is a gesture of respect and is usually appreciated regardless of the size of your audience.

This doesn’t mean you have to abandon all integrity and run amok all over Twitch; if you’re already an active stream viewer, you probably know a few streamers you enjoy – that’s a good place to start. Don’t expect shoutouts and new followers every time you host someone, though, and learn basic Twitch etiquette – such as not overtly promoting yourself and your channel in other people’s Twitch chat. That’s a big no-no right there.

Do: be yourself – unless you are doing a character, and you’re good at it, this is an obvious one. There will always be some element of performance in doing a stream, but stay true to yourself. I know that sounds cheesy, but hey… integrity or something.

Don’t: look at the numbers. Never look at the numbers while live; you can check the stats afterwards if you want. Don’t obsess about viewership. Assume there is always *someone* watching your stream, even if no one is chatting. This is classic advice, and still one of the hardest lessons to follow If you want to give streaming a go, try to do it because you enjoy it and have fun – not just because you want to “make it”.

For those who haven’t visited your channel, what makes your channel stand out from the rest?

Honestly? It doesn’t. I know that’s not a great way to promote myself, but there are literally over 2 million different streamers on Twitch every month – thousands upon thousands of people who are any combination of smart, funny, nice, welcoming, good at games, bad at games, and/or have beards. Maybe I’m one of the “good ones” if your tastes are compatible with the style of entertainment I deliver, though.

I had to go to my community for an answer to this one, really; it feels weird “selling” my channel based completely on my own ideas and assumptions. A few of the things they told me they liked were that I’m willing to try new things, I keep my content varied, and I put in the effort of having a cohesive design that not every channel does. I was also told that I’m humorous and fun to watch, I don’t take things too seriously, and they like that I actively engage with chat and the community (off-cast in Discord, monthly movie nights, etc.) – also, I’m normally pretty good at sticking to my schedule (unless life happens). People also seem to like my general theme.

There. I’m gonna feel awkward about all this now, while also being pleased at the feedback and how it holds up with what I’m going for with my channel.

Who’s your favourite streamer and what did you learn from them?

I could easily give over a dozen shoutouts here, but the big one goes to TheTechnoTed. I’ve known him for a while now, and we are both casters in the Glory Hole community Discord group. He is a shining example of consistency and hard work, and rightfully earned a Twitch partnership earlier this year. He streams a lot, he’s always entertaining, and he has a very positive energy. I’ve used him as an example of what I look for in a quality streamer more than once. He tends to end up in those “Twitch Fails” videos fairly regularly as well.

He’s an inspiration when it comes to having fun and not taking yourself too seriously, as well as the radical concept of taking regular breaks every two hours. I learned it from watching YOU, Ted! In addition, he’s just a groovy guy, and fun to hang out and play games with on occasion.

He also has a cat.