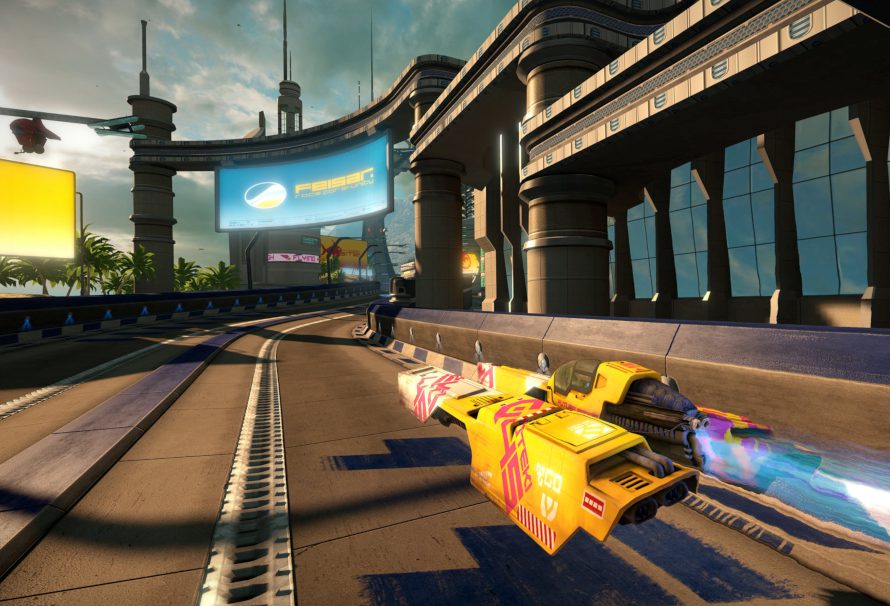 So let’s crank up some peak hits by The Prodigy and race through the story of Wipeout’s future history.

Truly iconic franchises often belong to an era. In that respect, Wipeout is every bit a personification of 90s x-treme style, and as representative of the decade as the WWF Attitude era or South Park. Yet Wipeout comes at it from a very different direction.

At its core, Wipeout was never a complicated concept. It featured a league of zero-g teams racing in ships that looked like the illegitimate offspring of a stealth jet and a can of coke. To spice things up, power-ups could kit a ship out with weapons and defences, while savvy players could exploit their track knowledge to make full use of the built-in speed boosts.

Where Wipeout stood apart from the general arcadey nature of vehicular combat games was in its unique handling. Floaty physics (a good thing, in an anti-grav game) and air brakes offered players the ability to pull the game’s ships through impossibly tight turns. Combined with the importance of track knowledge, it created an experience with a high skill ceiling and, even at lower levels of skill, a feeling that you were flying something out of this world.

Ironically, for a series that drew so much from Japanese design aesthetics, Wipeout was an intensely British game. Its developers spitballed the initial design down the pub, for one thing. But it also tapped into the British rave scene of the 90s, perhaps best typified by the iconic use of The Prodigy’s Firestarter in its sequel.

Wipeout married that soundtrack to a vision of the future dominated by bleak industry and consumption, the future as seen through the lens of the 90s, sharing an inspirational space with the likes of Final Fantasy VII’s iconic city of Midgar. Design studio The Designers Republic was instrumental in shaping the aesthetic of the series through the crafting of its main characters, the anti-grav ships. Bright colours contrasted with sharp angles and sleek profiles to create vehicles that visually cut their way through grim urban backdrops.

Wipeout 2097 (XL in the US) took everything that worked about the first game and made it bigger and better. It was a sequel-cum-reimagining that proved an essential Playstation title, and was later ported to other systems including the Sega Saturn.

The series received two follow-ups as it reached its third incarnation. The “official” sequel, Wipeout 3, found itself in difficult territory. While it was a competent follow-up, it failed to attract the same kind of audience as 2097 and didn’t quite carve out a unique identity for itself. It was seen largely as more of the same, and the series began to shed the casual audience, with its fanbase slowly shifting toward the hardcore players.

Wipeout 64, meanwhile, was the N64 iteration of the franchise. On Nintendo’s console, it competed directly with the comparable F-Zero series. Even today, mixed opinions dominate the discussion around Wipeout 64. Some consider it a worthy successor, others an okay reimagining for a new console.

While neither game was bad, this generation of Wipeout games began to move Wipeout out of the popular spotlight.

By the end of the Playstation era, Wipeout was still a household name in the gaming world. Its next challenge was to make the leap to the Playstation 2 and aim for sophomore success.

Wipeout Fusion released in 2002. Psygnosis helmed the project again, but this time rebranded to SCE Studio Liverpool after consolidating with Sony.

While Wipeout Fusion proved a competent entry in the series and included most of the core Wipeout experience, it never achieved the same kind of essential gaming status that the previous entries enjoyed. Critics targeted its graphics, though they did note its exceptional soundtrack was on par with the Playstation era.

This period was a watershed for more than just the 3D era of consoles. It also represented a shift in popular culture away from the edgy and x-treme 90s to the iPod-defined 2000s. As real life became more gritty in the wake of events like 9/11, pop culture looked to a sleeker, shinier future.

This meant the x-tremely 90s Wipeout attitude would need to evolve to stay relevant. A game so known for its soundtrack couldn’t risk becoming the dad music of the gaming world.

Wipeout Pure was the series’ 21st-century rebirth. The canon moved forward by a century, the developers making a conscious choice to leave 90s-esque grit behind and adopt the sleek, white future that defined the changing aesthetics of the early 2000s.

Wipeout Pure launched in 2005 on the new Playstation Portable and achieved critical acclaim. Where critics had knocked Fusion for failing to use the full potential of the Playstation 2, it was clear Pure was wringing everything it could out of the PSP. Pure received a follow-up in the form of Pulse, released in 2008.

Wipeout HD was the next leap for the series, taking things onto the Playstation 3 and into full 1080p. The game released in 2008, after delays stemming from the use of visual elements that could risk triggering epilepsy. It launched on the Playstation Store as a conscious effort by the developers to prove the Store wasn’t just for small-fry games.

2012 saw the release of Wipeout 2048. As the name suggests, it was a prequel to the series, though this defined more in the way of aesthetics than gameplay, giving us the Wipeout version of street-racing franchises like Need for Speed. The lore explored a world where anti-gravity racing was still underground, with makeshift tracks formed from busy near-future expressways.

2048 built on the technology of its immediate predecessors, which allowed the team to keep much of their existing engine intact. In doing so, they demonstrated how easy it was to make the leap from Playstation 3 to Playstation Vita—and 2048 was part of the Vita’s line-up of launch titles.

The game launched to positive reviews, with critics noting that it provided a beautiful demonstration of the Vita’s power. 2048’s new aesthetic prompted some commentary, both positive and negative, but on the whole, it proved an essential early title for the handheld.

Sadly, 2048 proved to be the last hurrah for series originators Psygnosis/SCE Studio Liverpool. The studio closed later that same year, effectively slamming the air brakes on the franchise.

With the end of SCE Studio Liverpool, Wipeout’s most recent release is the remastered Omega Collection, and with the franchise going silent since 2017, it may be that Wipeout’s future is a thing of the past.

A few other games have dipped into the vehicular combat pool over the years, including the likes of street-racer Blur and Need for Speed: Most Wanted. Wipeout’s brand of futuristic gaming was even echoed in games like Star Wars: Podracer. Wipeout’s basic DNA still lives on in the kart racer of your choice, but its unique fusion of vehicular combat and sim-like depth feels like a hole has been left in the gaming world with the franchise’s end.

The series has proved influential enough to spawn imitators, however, developed by people who grew up playing Wipeout. 2016’s Redout was a throwback to and fusion of games like Wipeout and rival series F-Zero. 2017’s Pacer (formerly Formula Fusion) is the most direct Wipeout descendant, featuring all of the key elements of the series minus the brand. BallisticNG, meanwhile, is to Wipeout what sprite-based indie games are to the SNES, providing a hypothetical Playstation-era Wipeout 4 that never was.

For now, though, these imitators are all that’s left of the Wipeout name.

Still, 2048 is less than thirty years away now, so who knows? We might all be living the anti-grav dream by the middle of this century.