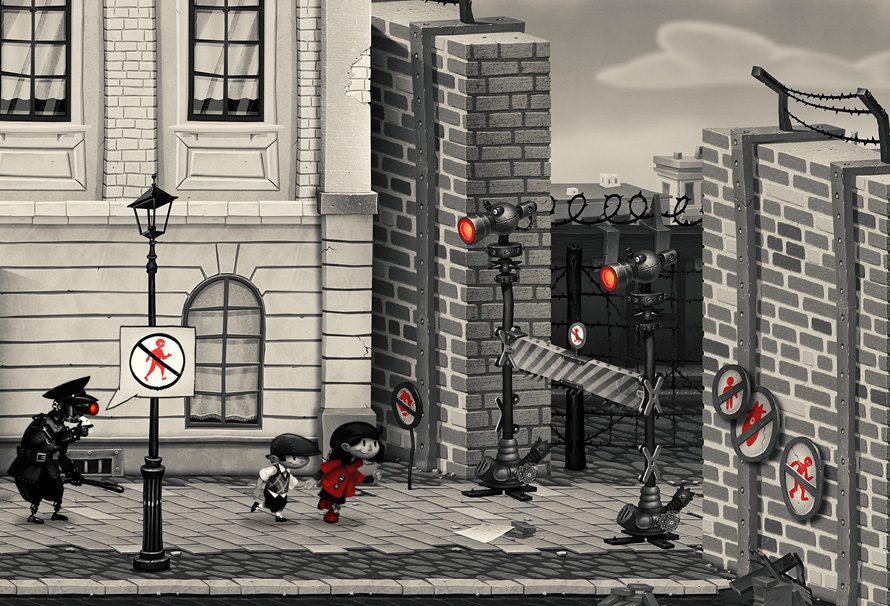 My Memory of Us, coming from developer Juggler Games, is all about friendship and the bonds that grow between people when they spend time together.

The game takes place within the past, in particular the narrator’s past. Voiced by Sir Patrick Stewart, this old book seller encounters a young girl who reminds him of a time in his life when he knew a little girl just like her. Embracing the memory, he begins to tell her of his friendship with the young girl in years past and of the events that brought them together and cemented their friendship.

My Memory of Us is a game that takes place during a fictional war in a past that’s similar to, but not quite, ours. Taking place before, during, and after a terrible war, it shows us how two children can grow and survive due to their friendship.

Developers Juggler Games were very clear that this war isn’t directly based on any particular conflict in the real world, for example we’ve never had steampunk battles across the face of our Earth, but the themes that the game draws upon are ones that we can all relate to. They’re from Poland, a country which was strongly affected by war throughout the twentieth century, and that legacy is apparent in this game. Inspired by tales from older generations and how life carried on even though the country was torn apart, My Memory of Us hopes to bring some of those stories to life in this fairytale-esque adventure.

The game itself plays as a cross between an adventure game and a platformer, with both the boy and the girl having their own abilities which complement each other. The girl is taller, runs fast, helps the boy up onto ledges, and can use a slingshot. The boy is a bit younger so he’s better at sneaking his way about and staying unobserved. Though there are enemies in the game, there’s no combat or real violence. Being spotted in a stealth section just restarts you a few seconds ago.

The game has a monochromatic palette for the most part with characters and the world itself being presented in greyscale. Red is the only colour in the game, it denotes usable object or items of interest. Harking back to Schindler’s’ List, the main characters are also wearing red, often the only colourful things in a scene.

The art style, however, is anything but grim. It’s a fairytale adventure, the characters are rounded and wide-eyed, the world while filled with danger is still fairly fun and friendly. It’s worth remembering that the game you play isn’t necessarily the accurate history of the events the old bookseller is recounting, he’s telling a young girl and it’s been a long time. He may be an unreliable narrator, hence the tone of the art style being friendlier than one might expect from a war-torn state.

That said, this game is looking incredibly special. It uses personal experiences and memories to build a narrative that can be appreciated by anyone, one about friendship, about love, about closeness with other people, about survival in the face of overwhelming odds.