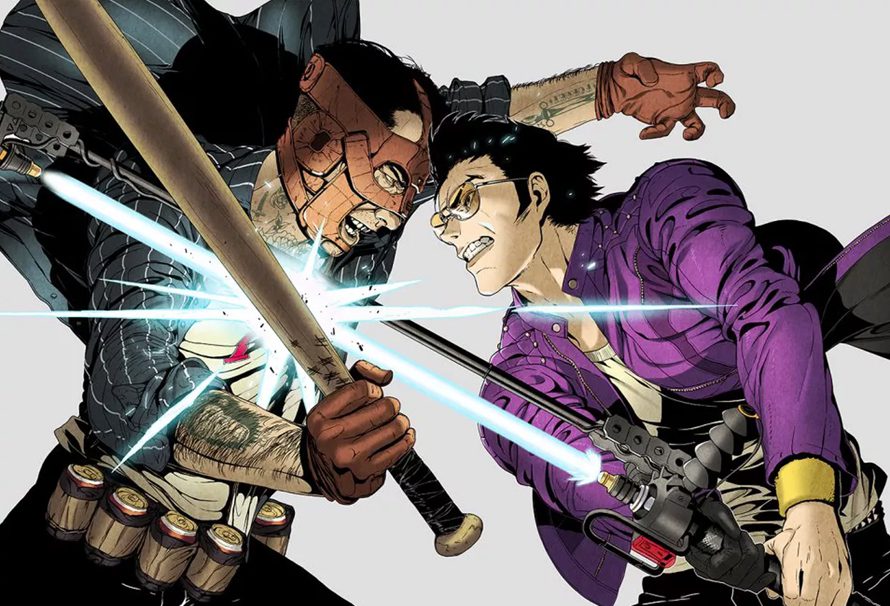 With the announcement of No More Heroes: Travis Strikes Again this week, we thought we would give you a crash course on what No More Heroes actually is.

It has been a fair while since Travis Touchdown’s last outing on the Wii. No More Heroes 2 was released all the way back in 2010, so it will come to no surprise that a new No More Heroes game is overdue. Here’s all you need to know about the previous two games and why you should be excited for Travis Strikes Again.

Who Is Travis Touchdown?

Before the No More Heroes saga, Travis was your average, over confident geek who was heavily into his anime, played video games and lived a simple life with his cat Jeane. At the start of the first game we are introduced to Travis after he has had a couple of drinks in the local bar. During this time Sylvia, a mysterious blonde woman convinces Travis to murder one of the top ranked assassins in the UAA (United Assassins Association). Whilst inebriated, Travis thinks this is a great idea and orders himself a beam katana online and takes down his target. Travis then discovers that he is now a member of the UAA and has to take down a series of top ranking assassins in order to become the best.

After Travis acquires his beam katana and takes down his first UAA assassin, players are then sent on a quest to become the best ranked assassin in the UAA. In the first No More Heroes game, this is achieved by taking out a variety of different assassins, such as a robots, a school girl and even a fake superhero named Destroyman. In No More Heroes 2 the same idea is used again as Travis has to fight his way to the top once more, he comes across even weirder assassins this time around, such as an astronaut who has returned from space and gone mad, the evil spirit of a kid called Matt Helms and New Destroyman which comprises of two cyborgs built from the two halves of the old Destroyman from the first game.

The gameplay for both games is mainly hack and slash based where players use the beam katana and a variety of wrestling moves that Travis learns throughout the games to defeat their opponents. Tactics have to be considered in these battles as well as the beam katana will run out of energy and need to be charged. As No More Heroes was a Wii game originally, it used mainly motion controls. For example, players had to shake the Wii-mote in order to charge the beam katana. The first game was also released on the PlayStation 3 which used less of the motion controls but still required you to shake the PS3 controller in order to charge your weapon.

Between missions, players were given mini games to play in order to earn money for upgrades and new outfits for Travis. The second game introduced a wider variety of weapons whilst the first game let players explore a small open world between missions.

Overall, the No More Heroes games have an in your face attitude and a great variety of gameplay that most gamers out there will love. Which brings us onto…

Why You Should Be Excited For No More Heroes: Travis Strikes Again

It has been announced that the third No More Heroes game, No More Heroes: Travis Strikes Again will be coming to Nintendo Switch next year. It has been a whopping seven years since No More Heroes 2: Desperate Struggle and it’s great to see that Travis Touchdown will be making an outing on the new Nintendo console. Not only will we get some amazing beam katana hack and slash action, we will also be getting some amazing collaborations from other indie game developers such as Dennaton Games, the studio behind Hotline Miami, and Yacht Club Games the developers behind Shovel Knight. We can also expect more crazy bosses, more fourth wall breaking humour and yet another title to look forward to from the iconic developer, Suda51.

No More Heroes: Travis Strikes Again will be released for the Nintendo Switch in 2018. Have you played any of the No More Heroes games? Which one was your favourite? Let us know in the comments section below.