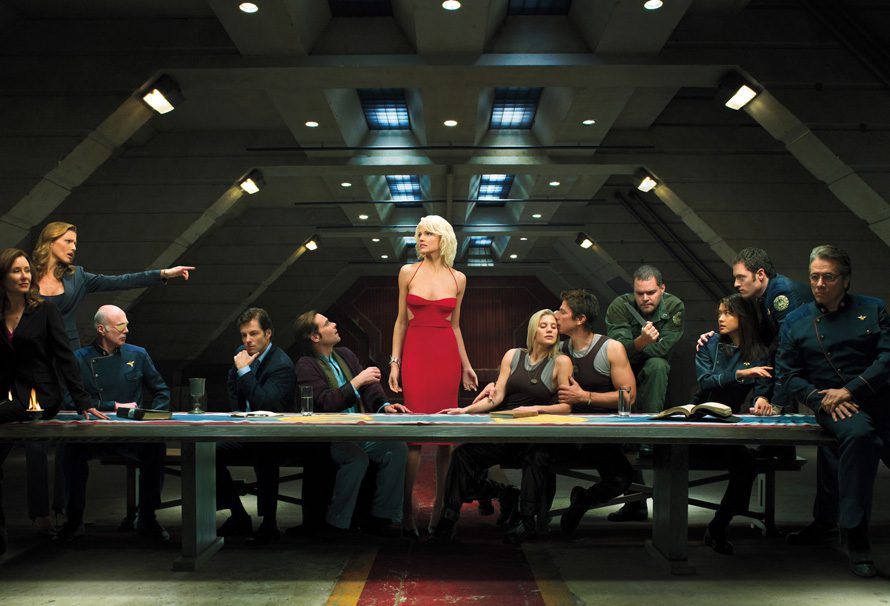 So here’s some games I’d like to see, using the Battlestar Galactica licence. Any game devs reading this, you’re free to take the ideas, just pay me lots of money when you’re rich and famous OK? Thanks!

This one seems like it’d be a no-brainer. The best parts of Battlestar Galactica are the drama, the quiet moments, the bits where things happen outside of big shooting moments and space combat. The best bits are all dialogue, consequence, choices, decisions. Things that Telltale all excel at, and the Battlestar Galactica universe is fecund with potential for decisions.

They could even take the Game of Thrones route and make their own story in that universe, on a smaller ship in the flotilla maybe where you only occasionally rub shoulders with Lee Adama, or Saul Tigh.

There’s a whole year you don’t really see at the end of series 2 when the fleet makes planetfall and hangs out there, slowly building a civilisation for the first time since they fled the Twelve Colonies. How about a game where you build up that new colony, from landing spaceships to the emerging nascent new civilisation.

Of course the Campaign mode would end abruptly after a year with the surprise arrival of a Cylon fleet. But who doesn’t like cliffhangers!

You’re going to struggle to find things to enjoy about the sequel to the original Battlestar Galactica series, but how about a Cookie Clicker-esque game, where you’re always under threat of being discovered on 1980’s Earth. Click the button to remove suspicion, but be warned, NASA is searching for you and it’ll only get harder! Click again, and again, keep clicking because they’re coming for you!

Make the game even more Cookie Clicker-like, and introduce upgrades so you don’t have to click so much (but obviously, clicking is recommended). Maybe you’ll invent a new cloaking method that’ll mean you can lay off the clicking, maybe you’ll get some sleeper agents on Earth so you can get advance notice of enemy spies. Then click click click to get rid of enemy suspicion.

It’s known that Assassin’s Creed: Black Flag is the best pirate game ever made right? RIGHT? Glad we’ve sorted that out.

It does that by taking a fairly unrealistic approach to ships and how they work. So why not stick it in space instead and just make it the same game! Pilot a large Battlestar around the universe, giving broadsides to enemy Cylon Basestars and singing space-shanties. Just delete the sea, stick in a space background, and replace all the ships with spaceships.

Job done, you’ve made the best space game ever, handshakes all round.

You’re a sleeper agent aboard the Battlestar Galactica, and you’ve just realised you’re a Cylon. Your programming has come online and your orders are filtering through to you.

This would set the scene for an immersive sim, in the vein of Deus Ex. You’re strong but not overwhelmingly so, so getting uncovered would be very bad for you especially on the submarine spaceship of a Battlestar. You’d have to complete missions while remaining mostly undercover, choosing your routes to sabotage the ship or perform mysterious tasks that you wouldn’t understand until later in the game.

It could even do the original Deus Ex thing of having you turn against your masters, as you gain sympathy with the poor fleshbags that you’re living amongst.

Alright joking aside, this one, this is the one. Make it.

A first person shooter where you play a Cylon Centurion in the original series (just so you can have a variety of weapons, and let’s face it, they’re cooler with their KITT eyes). Undertake a series of missions across the colonies, shooting fleshbags for your masters and also for fun.

If you made it less of a straight up shooter, then you could have a load of depth and see what the Centurions get up to on Basestars, get to see how they get their orders, what happens behind the scenes and just what they got up to when murdering all humans.

Stick in a sad tale about the protagonist Cylon wanting to be human, and you’ve got a hit on your hands.

This is more just a plea.

Make Freespace 2 or Elite Dangerous but in Battlestar Galactica.

Beyond the Red Line was good but I need more.

Those are my ideas for Battlestar Galactica games, and now hopefully if Deadlock takes off, we might see BSG make a comeback in game form! Do you have any of your own ideas? Hit us up in the comments below!