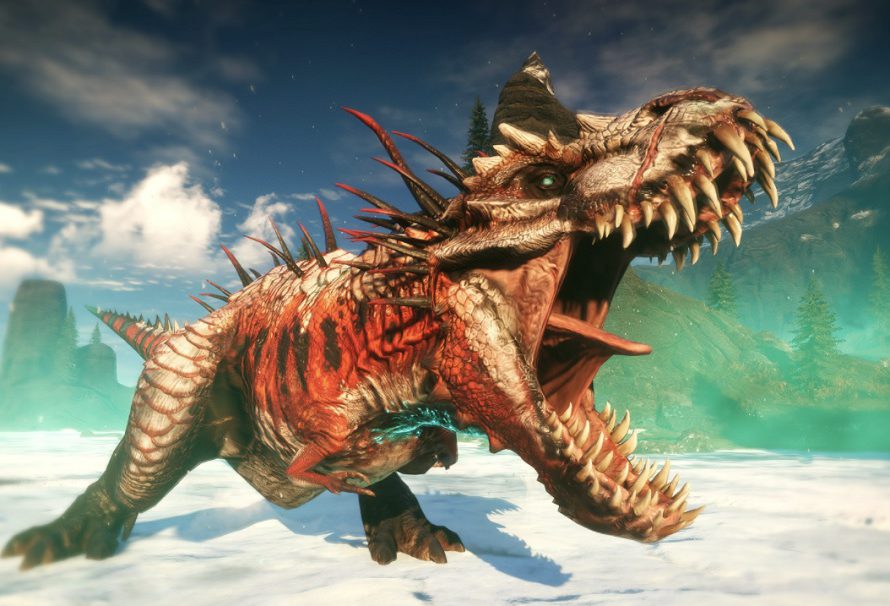 With its big guns, big worlds and even bigger dinosaurs, Second Extinction is making something of a big splash with developer Systemic Reaction already securing a large chunk of positive buzz. Just what is Second Extinction all about though and more importantly, why should you be excited? Well, we’re glad you asked!

Just What Is It?

Currently in the throes of early access, Second Extinction is a first-person shooter with a base premise which permits players to indulge in copious amounts of evil dinosaur murder and provides them with the arsenal to do it.

An online multiplayer only shooter, Second Extinction is all about you and two other souls cutting across a ruined world and laying waste to as many of its scaled denizens as you possibly can. Starship Troopers meets Jurassic World? You’re not far off.

Oh and Second Extinction is horrendously violent too, with enough blood to refloat what’s left of the Titanic’s rusting husk and sufficient detached limbs to make Rob Zombie blush like a cherub. Good stuff.

How Does The War Effort Feature Work?

Much more than just a series of isolated skirmishes between humans and dinosaurs, Second Extinction’s key difference is its War Effort feature which widens the scope of the conflict greatly.

With a strong focus on community play, War Effort brings a massive world map into view from which multiple, smaller regions abound each boasting their own unique threat level. A measurement of how well entrenched and challenging the opposition is in these regions, the threat level can be lowered if enough players collectively succeed in their missions and daily activities.

Likewise the opposite is true also. Leave a particular region alone for too long and the dinosaurs will begin to take over, elevating the threat level exponentially with the end result being an ultra-tough Emergence Event which forces players to band together to take on an overwhelming challenge.

What Dinos Can We Expect To See?

The first thing that you should probably know is that these aren’t the sorts of dinosaurs that you’d expect to see in a museum. Massively mutated monstrosities that have seemingly emerged from some nightmarish abyss, the dinosaurs in Second Extinction are something to behold with horizon engulfing Tyrannosaurs and hulking Triceratops that boast massive jagged horns and puss-marked skin.

More than just walking spectacles, the dinosaurs in Second Extinction are ruthlessly clever predators too. Including five(!) different types of mutated Velociraptor, including acid spitting, electricity shooting and ground burrowing variants which all boast a variety of sophisticated flanking and defensive tactics, Second Extinction’s dinosaurs have more than one ‘clever girl’ in their ranks to say the least.

Who Will Be Tackling The Dinosaur Menace?

In order to face up to the encroaching threat, Second Extinction provides players with a quartet of different heroes to choose from each with their own strengths, weaknesses, skills, abilities and of course, weapons.

First up is Jürgen Winter, the oldest member of the group. A top-tier sniper from the depths of rural Germany, Jürgen is all about dealing high amounts of damage at long distance whilst remaining undetected for as long as possible. Whether he’s using his low profile ability to become harder to detect, masking the scent of his group to prevent detection by the dinosaurs or using a devastating satchel charge, this is one grizzled hunter that you’ll always want covering your back.

If Jürgen Winter is all about evasion and dealing damage from afar, our next character, the Colombian born Valentina Ortega, is the absolute polar opposite. Built for full-on confrontational combat, Ortega forsakes a sidearm so that she can wield two heavy weapons instead, enabling her to dish out devastating amounts of bullet-powered abuse on the battlefield. Abilities wise, Ortega’s combat high is charged by performing kills and damaging enemies. Once charged, combat high does what it says on the tin – sending Ortega into a heightened combat state. Elsewhere, Ortega’s dash ability is pretty self-explanatory too, allowing our gun-toting mercenary to escape out of danger at a moment’s notice.

With her bulky armor and massive chaingun, Rosy’s appearance can be somewhat deceiving; not least because it turns out she’s actually much more of an effective support class than she is a damage dealer or tank. Effectively a support bulwark against the onslaught of murderous dino-folk, Rosy’s abilities are all about helping out her fellow teammates and styming her enemies in equal measure. Able to restore health to her fellows, Rosy can also commend the team for doing well which increases their defense and health regen, while her static barricade skill allows her to construct an electrical barrier between specific points on the battlefield.

Essentially a hybrid scout and damage dealing class, Amir Wilson’s worth on the battlefield is absolutely tied to his twin gift for uncovering enemy positions and then being able to deal substantial amounts of damage into the bargain. From his orbital surveillance skill that flags up enemies in a specific area, to his situational awareness ability that prepares him for incoming danger and finally his precision strike skill that calls down a satellite blast on his unfortunate foes, Amir is a versatile combatant that is an essential part of any group.

Given that Second Extinction is in early access, you can expect to see more heroes added to the roster too.

Being an early access title means that the developers behind Second Extinction are not only fixing bugs and making tweaks on the fly, but will also be also adding new features and content as the game matures throughout the early access lifecycle.

In October and November alone, fresh enemy mutations and emergence events are planned, while further afield, a new horde mode, seasonal events, additional heroes and new dinosaur enemies are all in the pipeline. In short, Second Extinction looks to be around for the long haul.
Second Extinction is out now in early access for PC.