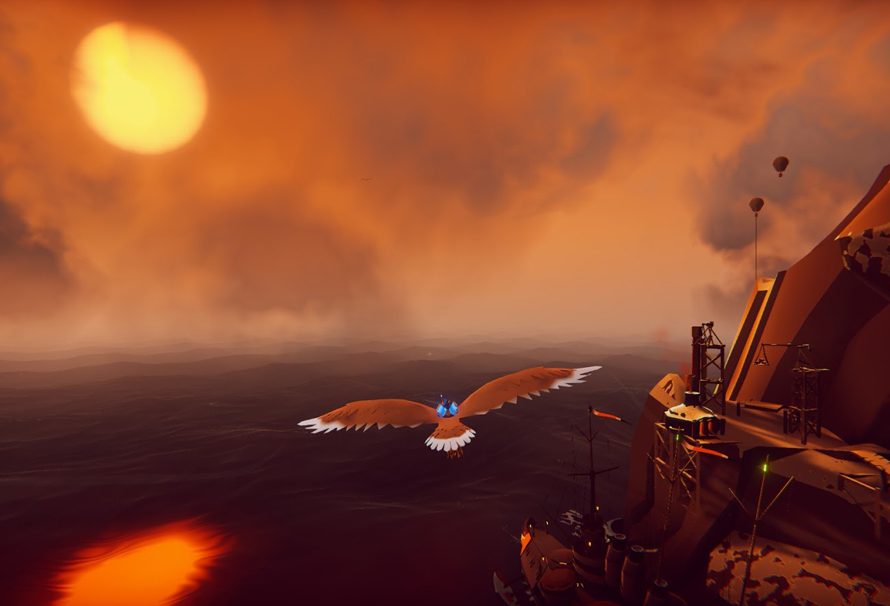 The Falconeer entranced me as soon as I emerged into the gorgeous world within the recent beta. The waves of the rolling sea crashing against the laden cliff-sides and settlements; an illustrious tower awaited me in the distance, illusions of grandeur encapsulated my falcon as I soared effortlessly through the blood-lit skies. Renowned developer Tomas Sala set his sights to those skies and aims to deliver us an aerial dogfighting experience like no other. These are my first impressions of the game so far.

After booting up the beta, I was greeted by dialogue filled with mystery that drew me into the proposed world. “In order to discover the truth we must start at the beginning with an ambitious heart. A first heartbeat beat will grow into a thousand consequences.” I was told by a mysterious figure dressed in cultural attire. I immediately was drawn into the world and wanted to learn more about it as I was flying through the upper echelons of the skies.

Before I started playing through the introduction mission, I firstly heard an overview of the location and I then had to choose my character. There are plenty of characters/’Falconeers’ for players to choose from and also the implementation of factions that alter the story’s path depending on which one you choose in the main experience.

As I emerged, a myriad of beauty embraced me as the cel-shaded islands were visible. Flying was effortless, I was using a keyboard and mouse, directing my falcon was as simple as counting to three; I weaved and rolled between the gusts of wind and dived down to the ocean, dipping my falcon’s talons into the water. The serenity I felt while flying was unparalleled.

Ursee — an open-world to soar into

The open-world we will be inhabiting is ‘The Great Ursee’, home to locations that effuse with an aura of mystery and wonder. The world is not as it seems and layers of depth can be unravelled from each location. One of these locations is ‘The Maw’; a breathtaking environment where the sea looks as though it has been scythed in half.

Ursee is not only a breeding ground for unique locations but also one of diverse enemies and creatures, from Weaver dragons (yes…dragons!), to airships, sea creatures, naval ships, other Warbirds, and much; much more. The world can be freely explored by players because at its core, although the missions are self-contained in smaller chunks of the map, the overall world is one of impressive scale.

I will certainly be exploring the world as my heart desires to find out more about the enrapturing locations. The world has been meticulously crafted with elegant detail and passion by Tomas Sala and it’s this passion that makes me want to see what is hidden beneath the surface of Ursee; quite literally, because there are areas that are situated under the surface of the ocean. Amazing stuff all around!

An open world of grand scale and intrigue, mesmerising lore and dialogue, diverse enemies, but how does the actual combat fare when tested? Well, the answer to that is simple, it fares like a slick and newly oiled machine, it is both fast and fluid. The mechanics allow for players to make their own choices of how to approach a situation. The satisfaction of diving downwards, pulling up, barrel rolling then airbraking to start firing on an enemy at a unique angle is immense.

Thunderstorms are omnipresent and ‘Falconeers’ can harness the electricity of the storm to charge some of their weapons. Sparks clash with the warbirds and in one fell swoop, a devastating and brutal combat situation between yourself and another enemy will ensue. Locking onto enemies is just as easy and efficient. Keeping track of them is held in this same vein, for people using a mouse, a simple click of the scroll wheel will recenter your camera on the chosen target for maximum impact.

I had a ton of fun playing the beta, this experience is definitely one to watch out for. The Falconeer releases on November the 10th, are you going to be taking to the skies? Let us know in the comments below.