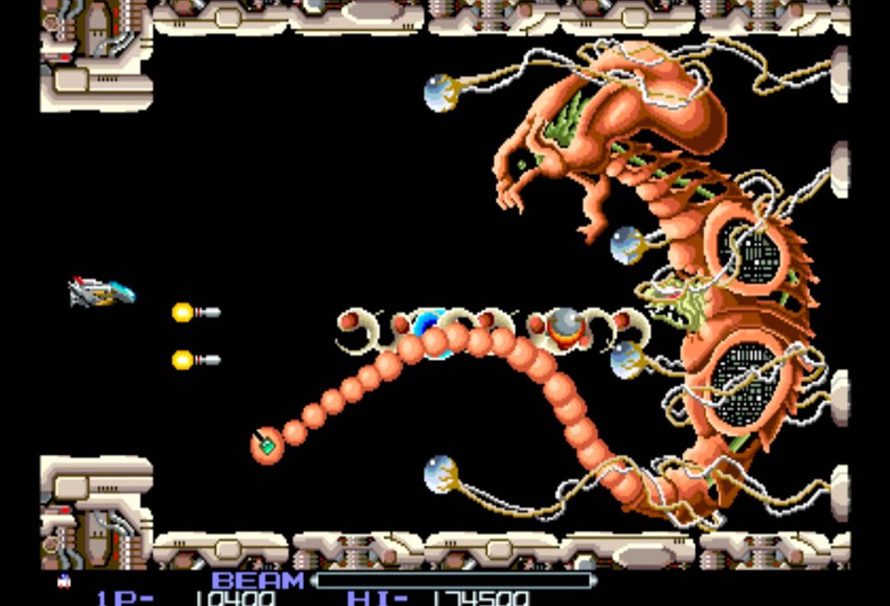 Most gamers know that space is full of some weird stuff, and that, for the most part, it’s the kind of stuff you’re better off blowing up with a spaceship. While Space Invaders might be the most famous example of what’s wrong with space, R-Type taught us to keep calm in the face of the impossible.

So let’s make our methodical way through the alien horrors of the R-Type series.

R-Type was released in the dawning modern age of gaming, after the crash of the early 80s. While initially an arcade game, it also found its way onto home consoles. Like contemporary series Gradius, R-Type redefined the side-scrolling shoot-em-up, with developers Irem bringing a new vision to the genre.

Even today, many people think of side-scrolling shooters and bullet hell games as frenzied, reactive affairs. Yet R-Type set itself apart by slowing things down, introducing a deliberate pace that rewarded memorisation and pattern recognition over twitch-based reflexes. While punishingly unfair, that unfairness only lasted until the player learned how to navigate through on subsequent lives.

R-Type featured a unique visual identity, drawing heavy influence from H.R Geiger, particularly his contributions to the Alien franchise. Like many Japanese games before and since, R-Type merged the technological with the organic, with stages transitioning from the blackness of space to weird womb-levels dominated by mutated horrors. The ultimate source of the ruckus in R-Type was the bio-engineered weapon-species called the Bydo, which, inevitably, turned against mankind. In R-Type, it’s the player’s job to stop them getting their weird tentacles everywhere by saddling up in an R-9 “Arrowhead” spaceship.

R-Types most iconic gameplay feature was the Force (no, not that Force). A Force was a glowy blob the player could obtain in the course of a level. Players had the option of positioning a Force at the front or rear of the spaceship or leaving it to fly and fire independently. Crucially, the Force was also indestructible, which meant that canny players could use it to intercept and block enemy attacks, opening up new responses to enemy attack patterns. High-level R-Type play is defined by this cunning and advanced use of the Force module.

R-Type received lavish praise on release and is still regarded as one of the best shoot-em-ups ever. Critics cited its crisp, colourful graphics, exciting gameplay and unique approach to the genre. It did, however, receive some criticism for its extreme difficulty, which calls to mind the kind of criticism (justified or otherwise) levelled against modern hardcore games like the Dark Souls series or Cuphead.

R-Type II was an anticipated follow-up to the success of the original game. As a sequel, it didn’t bring many new changes to the series, acting more as a refinement and slight expansion on the original. It featured new weapons, more enemies on-screen at any one time, and an even sharper difficulty curve than the original game.

In many ways, it was designed to appeal to players who had already mastered the series’ first outing. Levels were even more claustrophobic than before, both due to the game’s overall darkness and its more cluttered level design.

The SNES port, titled Super R-Type, was a reimagining of R-Type II. The most notorious change Super made to its parent title was the removal of in-stage checkpoints. This made a hard game even harder—hard enough to alienate some gamers.

R-Type III: The Third Lightning was the first R-Type game to skip the arcades, released only on the SNES. Its primary departure from the previous games was the introduction of new Forces, which opened up new gameplay styles. The introduction of the Hyper Wave Cannon added a risk/reward dynamic to the game, giving players access to a powerful new weapon at the potential cost of their ship overheating.

Like its predecessors, it released to strong reviews, and it received a port to the Game Boy Advance roughly a decade after its initial release.

Bringing things into the 3D era, R-Type Delta released for the Playstation in 1999. Though it retained the side-scrolling gameplay of its predecessors, it updated the series with 3D graphics, creating a 2.5D visual style that allowed enemies to emerge from and disappear into the background, and for levels to wrap around corners, among other visual tricks.

Players could choose from multiple ships, each with different weapon styles. Delta introduced the Dose System, which allowed the Force modules to absorb energy, which players could then unleash in a ship-specific ultimate attack.

As its name suggests, R-Type Final was intended as a last hurrah for the series at the time of release. Developed for the Playstation 2, Final once again featured full 3D environments, but its stand-out feature was the huge range of ships on offer, with over 100 ships available to the player.

R-Type had always featured H.R. Geiger-inspired near-sexual imagery, inspired by his work on Alien, but Final abandoned all pretence, with the last acts of the game playing out against a backdrop that can only be described as two human silhouettes getting jiggy with it.

All told, Final received positive reviews and seemed set to end the mainline franchise on a positive note.

While we’ve covered the linear sequence of the R-Type games, there were also several spin-offs and experimental R-Type games over the years, like R-Type Leo and R-Type: Flash of the Void. While most kept to the same basic formula, the two R-Type Tactics games took things in a new direction. They fused series staple gameplay elements with elements from tactical role-playing games, creating something decidedly different to R-Type’s core philosophies.

After a long period of silence, R-Type is set to make a comeback with the ridiculously-named R-Type Final 2, and it didn’t help fan scepticism when the announcement landed on April 1st. Yet it turned out to be no joke, and Final 2 is in active development with an expected release on Playstation 4, Switch, Xbox One, and PC. There’s little information about what Final 2 will bring to the series as yet, but fan expectation is sure to be high after a sixteen-year hiatus.

In the meantime, R-Type fans can enjoy the classics in the form of R-Type Dimensions, which includes full 3D remakes of R-Type and R-Type II, seamlessly integrated with the classic versions so that players can switch between the two with a button-press. The original version of Dimensions released in 2009 on the Xbox 360, but saw a recent, 2018 port to Steam, Switch, and PS4 under the title Dimensions EX.

While the side-scrolling shoot-em-up has largely disappeared, the spirit of R-Type persists in the popular resurgence of demanding, hardcore games best typified by the Dark Souls series. Perhaps one of the closer descendants of R-Type is Cuphead, a game that shares its fiendish difficulty based on pattern recognition and memorisation.
Bullet hell games of this style are rare now, with modern indie bullet hell games more often embracing a frenetic, adrenal pace. But with R-Type Final 2 on the horizon, series fans won’t have to accept substitutes for much longer.