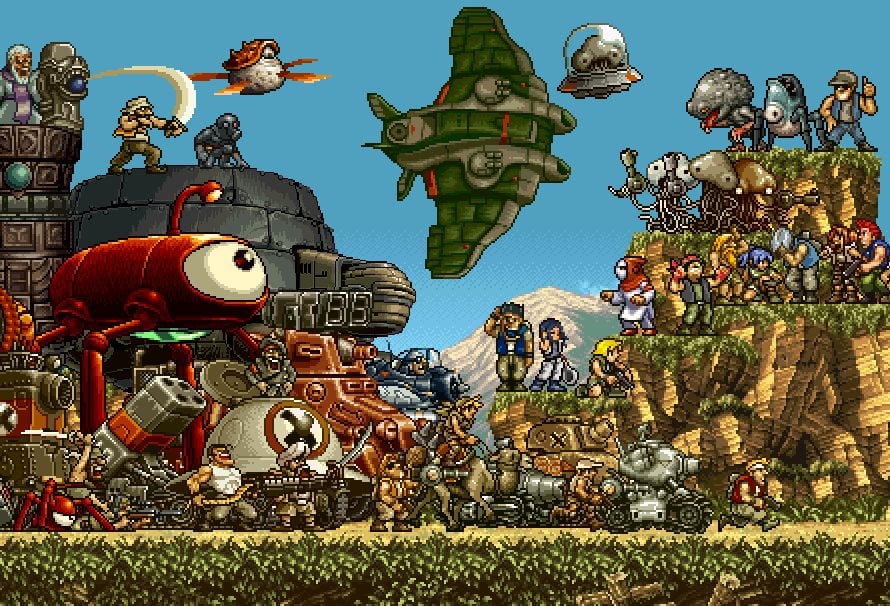 It’s a rare game series that can defy changing tastes to remain popular yet unchanged across seven titles, but the Metal Slug series has achieved it. The timeless franchise feels as much at home in today’s retro-styled indie scene as it did in its era origin.

So let’s take a look at the Metal Slug series and how it has gunned down the competition.

The original Metal Slug was an indirect descendant of several games from development studio Irem, which had already found success with titles like R-Type, In the Hunt, and Gunforce.

Metal Slug was the child of the latter two, developed by ex-pats from Irem in the form of new studio Nazca Corporation. It combined the frantic shoot-em-up style of the team’s previous titles with the lessons learned in their development, creating a final product that was pure, distilled game design perfection. This gameplay was presented in a now-iconic, timeless aesthetic, making Metal Slug easily one of the most complete packages in gaming.

The bizarre name of the series derives (in a curious bond with the similarly-named Metal Gear series) from its mascot weapon of the same name, the Metal Slug tank. This was originally to be the main player-controlled entity, before the game was overhauled to feature human characters. The Metal Slug still features as a vehicle in the original game, and was later joined by a host of other player vehicles, also referred to as Slugs.

The original game was released on Neo Geo arcade software and its home consoles in 1996, but was also ported to various other platforms throughout the 90s.

Metal Slug’s graphical style and art design were so incredible that it still holds up today, as though it were an indie game merely styled as retro. The Metal Slug aesthetic is instantly recognisable with its chunky, bulbous look, even bringing organic curves and bulges to mechanised infantry. Some of its bosses and enemy machines are beautifully complex in their design, making them a joy to fight. It’s no surprise that the series has stuck close to that aesthetic across many iterations.

The original Metal Slug was a commercial and critical success and was followed by Metal Slug 2 in 1998 and Metal Slug 3 in 2000, though not before series originators Nazca merged with SNK. Among its other refinements and additions, Metal Slug 2 brought character transformations to the series. Characters could become a mummy or grow obese, dramatically changing how they controlled. Metal Slug 2 was later remade as the definitive Metal Slug X, released the following year.

Metal Slug 3’s big contribution to the series was the introduction of branching paths, which added to the game’s replayability. For many, Metal Slug 3 represents the high watermark of the series, the perfect distillation of everything that makes Metal Slug great.

In the early 2000s, SNK found itself in a rocky financial position, and eventually declared bankruptcy, forced to sell the rights to several in-house IPs, including the Metal Slug franchise. Developers Mega Enterprise and Noise Factory acquired the rights to Metal Slug and would go on to develop Metal Slug 4 as their first game in the franchise.

Metal Slug 4 didn’t take any huge chances, sticking closely to the formula established by the franchise originators. However, it added a scoring system that tracked the number of enemies killed in a given time span, while also including a new transformation and several new vehicles.

Metal Slug 4 received a mostly okay reception, and, for the most part, established that the new developers were capable of aping the success of the old. However, this would turn out to be the only game developed in the interim between SNK’s collapse and its rebirth as Playmore Corporation, later renamed SNK Playmore.

After re-acquiring the rights to Metal Slug, SNK Playmore returned to the developer’s seat for Metal Slug 6. Leaving the Neo Geo behind, this iteration was developed for the Sammy Atomiswave arcade platform and was ported to Playstation 2 in the same year.

Metal Slug 6 followed up on the story of Metal Slug 3, with its rebels and Martians. Metal Slug 6 introduced two difficulty levels, with the easy mode giving players heavier firepower at the expense of an early end to the game. As usual, a bevvy of new vehicles showed up alongside old classics, and each character gained access to character-specific abilities. While it may not sound groundbreaking, this was the first Metal Slug to introduce weapon switching, allowing players to carry multiple weapons at once.

The Future is Now

The most recent entry of the mainline franchise released in 2008. Developed once again by SNK Playmore, Metal Slug 7 was developed for handheld, releasing on the Nintendo DS.

Using the dual screens of the DS, Metal Slug 7 introduced a touchscreen level map, giving players an overview of their current stage that they could use to navigate with more information on hand than in previous titles.

A remade version of the game, Metal Slug XX, was later developed for the Playstation Portable and released on Xbox Live Arcade. This version overhauled and expanded on 7, including branching paths that deepened the game’s replayability, harkening back to the changes introduced by Metal Slug 3.

While that wraps it up for the main series, it’s worth taking some time to talk about the spin-offs, compilations, and remakes. We won’t go into detail here, but Metal Slug has seen its share of handheld adaptations and mobile games, with the latter having a particularly mixed record. All told, there are over 30 games in the larger Metal Slug franchise.

The mainline Metal Slug series hasn’t received a new game since Metal Slug 7 in 2008. Like its distant ancestor, R-Type, Metal Slug belongs to a genre underrepresented in modern-day gaming. As an arcade-friendly, 2D shooter, it holds little resemblance to the likes of Call of Duty or Battlefield, though there’s a whiff of its over-the-top action and ludicrous vehicles in Respawn’s Titanfall.

Players looking for a new Metal Slug are more likely to find it on the indie scene, in games ranging from Cuphead to more direct descendants like Blazing Chrome. Games of Metal Slug’s native era can also be found in various retro collections, too.
While drastic innovation has never been Metal Slug’s way, it still has plenty of ammunition left. The Neo Geo arcade brand has experienced a recent revival as the Neo Geo X, and SNK have already announced that a Neo Geo 2 is on the horizon. Metal Slug 8 would make a natural partner to the platform, so it could be time for some slick, stylised warfare after a decade of relative peace.