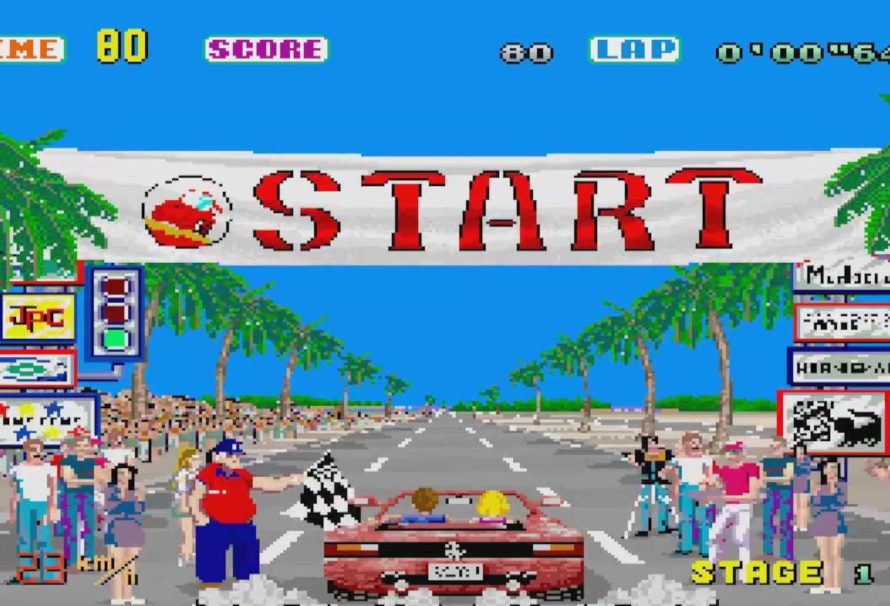 The 80s were a time of excess and optimism, and no game quite captures the spirit of the 80s like OutRun.

Released smack in the middle of the decade, OutRun redefined racing games and encapsulated the 80s in arcade cabinet form. But its influence doesn’t stop there, as it left a lasting (and unlikely) mark on music and cinema, too.

So let’s take a look at OutRun and the legacy it sketched in burning rubber.

By 1986, the full effects of the video game crash of 1983 had become apparent, ending the Golden Age and the second generation of video games. Arcade gaming was on a downswing, and it wouldn’t recover until fighting games breathed new life into the format in the 90s.

But somewhere in all this doom and gloom was the carefree spirit that produced one of the greatest racing games of all time.

OutRun released to arcades in 1986. Conceived by Yu Suzuki, whose other claims to fame include arcade legends Hang-On, Space Harrier, and After Burner. To develop the game, Suzuki took inspiration from a scouting trip to Europe, though only after being told that the USA was too dangerous for location scouting. He returned from his trip with both a backdrop for his game and its main star: the Ferrari Testarossa.

OutRun didn’t pit players against other racers—at least not directly. It played out as one extended time attack played against the game. Instead of racing against opponents, the main goal of the game was to reach the end as fast as possible, dodging civilian traffic along the way. A checkpoint marked the end of each stage, and passing through the checkpoint would extend playtime.

In essence, OutRun felt less like a street racer and more like an irresponsible driving simulator. It was about the pure petrol-headed joy of it all, the feeling of driving with the top down on a summer’s day distilled into video game form.

The whole game played into this breezy power fantasy, with its bright, pristine graphics, and boppy 80s soundtrack. Even its main characters personified the idea: a shades-wearing dude and his token blonde blazing across European landscapes in the game’s true star, the Ferrari Testarossa.

OutRun’s graphics were incredible for their time. Though sprite-based, the illusion of 3D was unparalleled. Players could see every crest and downslope in the road, fields of crops whooshing by on either side, with the whole thing painted in vivid, saturated colours.

The game’s soundtrack was one of its most memorable features, perhaps best described by one of the track titles: a magical sound shower. It blended 80s synth with Latin-esque beats, and players could select tracks to race to, creating a personal connection between the player and the soundtrack. Essentially, this gave the player control over the car stereo.

The sense of adrenaline and power was elevated further for players who got the chance to play in the sit-down arcade cabinet, which modelled a car seat and included the wheel, pedals, and gear stick.

On top of everything else, OutRun also featured a uniquely non-linear design. The entire game consists of one long “track” unlike the many separate stages common to most racing games. There was more than one path through the game, however. Just before each of the checkpoints located along the track, there was a fork in the road. Which fork the player chose would determine which area they would pass through next, and their final path would even determine what kind of ending sequence the player would see.

The Road Most Travelled

OutRun received rave reviews from critics and is one of the games credited with keeping the gaming industry going through the difficult mid-80s. Even today, OutRun is consistently listed as one of the best games of all time and noted for its influence and legacy.

OutRun received ports to just about every console in the years after its release, carrying it through to the early 90s. It also received a number of follow-ups, though none that could capture the public imagination like the original game had done.

Finally, the series received a “true” sequel in the form of OutRun 2 for arcades in 2003. Somewhere between a sequel and a modern remake, OutRun 2 also released on the Xbox, and expanded on the original game with a larger soundtrack, multiplayer, and a choice of cars. Its main game mode echoed the forked paths of the original, but it also included a stunt-focused Heart Attack mode and the option to race against a time attack “ghost” car.

The Future in the Past

We can measure the true legacy of a game in influence, which puts OutRun up there with some of the most successful games of all time.

Dozens of racing games in the last few decades have drawn inspiration directly from OutRun or included references to it.

In a rare feat for a racing game, however, OutRun’s influence even transcends the medium. The game was such an iconic distillation of everything 80s that it spawned an entire sub-genre of music and aesthetic sensibility. As the r/outrun subreddit puts it, OutRun is “a revisionist 80s music style of synthesizers and pulsing beats, and the retrofuturist 80s aesthetic of fast cars, neon lights and chrome”.

This outrun genre has even cracked the mainstream, thanks to French electronic artist Kavinsky. OutRun is the name of Kavinsky’s debut album, which features a cover that could easily be the poster image for a hypothetical gritty remake of the original OutRun. The song Nightcall, from the same album, played over the opening credits of 2011 movie Drive, starring Ryan Gosling and featuring one of the most mainstream showings of the synth-wave OutRun aesthetic. Drive also helped to codify the retro-80s aesthetic of the genre, with its electric pink font layered on visuals of muscle cars and set to synthwave tunes.

This outrun genre has circled right back around to video games, too. There’s a particular sub-genre deeply tied to the synthwave/outrun music genre. This includes titles like Neon Drive and OutDrive—their titles wear their influences on their sleeve, presenting the 80s nostalgia of OutRun through a trippy neon filter.

Other games that share DNA with OutRun include Need for Speed, Project Gotham Racing, and the Burnout series, all of which share the same wild joyriding feel of the classic game. More recently, Forza Horizon 4 included an OutRun-themed mission in its list of missions referencing other racing games. Even indie platformer Horace gets in on the action with OutRun-themed arcade games cropping up in its story. Decades later, it’s clear OutRun inspired a generation.

While OutRun isn’t talked about much these days, its impact on gaming history and beyond is still felt. As OutRun drives on into the sunset, the games, music, and movies it helped inspire are sure to keep its legacy alive for a long time yet.