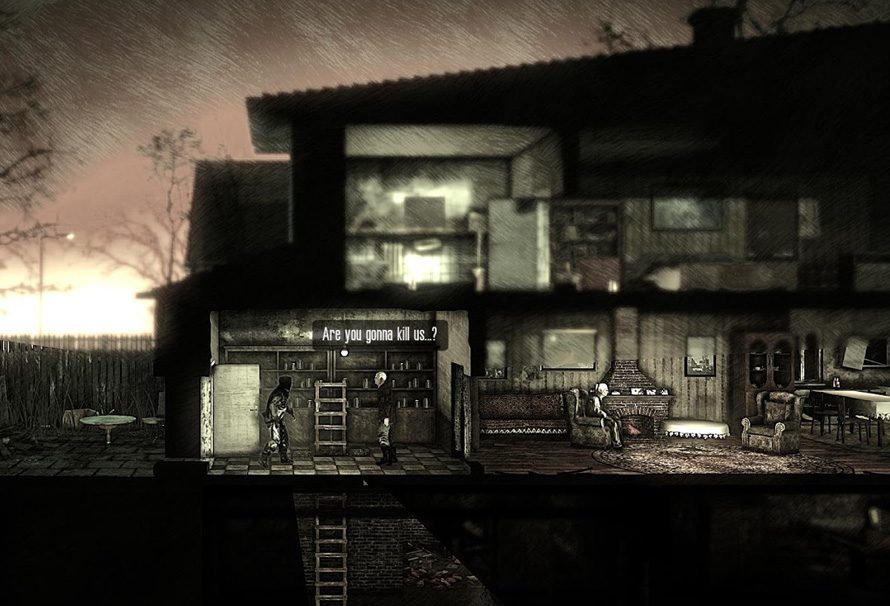 The year is 1990-something. You and your plucky band of heroes are somewhere in the besieged city of Porgoren. You will have to use your wits, judgement and skill to win the war. Except you won’t be winning the war. If you’re lucky you’ll be barely surviving the horrors of war in a makeshift shelter with the other civilians. There are no heroes here.

This War of Mine is a gritty look at the other side of war – the civilian side: the horrors of war, civil collapse and tests to your morality in a way few games ever could. This War of Mine is a survival-strategy game where you control a small group of civilian survivors caught up in the conflict. Food, medicine, water and bandages are all in short supply. Snipers make the streets too dangerous in the daytime, so daytimes are spent eating, preparing your makeshift shelter and trying to keep morale up. By night, you venture out to scavenge supplies – a voyage plagued by risks. Other survivors may fight you for their chance at survival, soldiers and criminals may take advantage of your plight. Perhaps you will take the nighttime to steal from other desolate civilians. How far will you go to survive? And at what cost?

It’s a brilliantly balanced survival-strategy. You can approach the game as a fighter and a thug, taking what you need from others because your own survival is paramount. Alternatively your method might be to focus on being a producer of medicines, food or cigarettes and trade with others to secure better defences and weapons

In my mind, This War of Mine is the best wargame out there right now and one of the best survival sims too – not just because of the jarring change in perspective from heroics to desperation but because of how emotionally invested you will become in it. It’s a gripping game that will give you a new gaming experience.

To round it off, This War of Mine is an aesthetic delight, the gritty, grainy charcoal-art style is beautifully delivered and is a perfect fit to accompany through your bitter -yet-definitely-a-fun-game experience.

This War of Mine is currently in our Summer Sale, so now would be a great time to pick it up if you haven’t already!