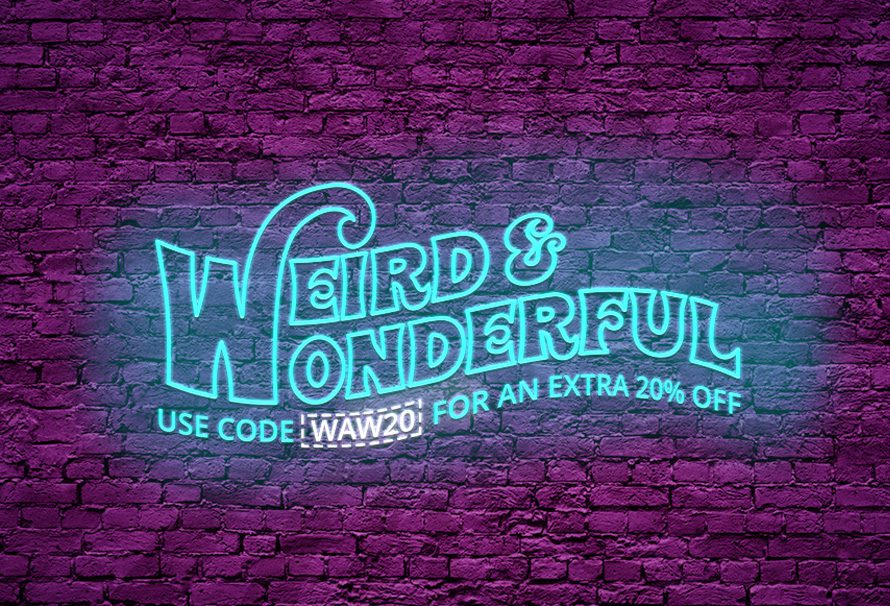 It’s October and that means it’s time to get a bit weird, and a whole lot wonderful.

We don’t want to let you down so we’re doing both with our Weird and Wonderful sale, starting on the 4th of October.

You know how sales work, the games go down in price and then you buy them ‘cos they’re cheap. Our Weird and Wonderful sales show off the smaller games out there, the games you might not have considered, the games you’ve put off buying. They’re small, they might be weird, but they’re definitely wonderful.

You just add the game to your basket and then use the code WAW20 to save an extra 20% off, so those games that are already cheap get that little bit more tasty.

A point and click through a world where you live on the inside and air is a rare resource. It’s not as grim as it sounds though, as the main character, Robert (or Flute-nose) is a charming person to spend your time with.

Avoiding some of the pitfalls that the adventure game genre has had by having a wonderful hints and tips tool, it’s as hard as you want it to be and always utterly delightful.

What’s better than a physics playground where your jelly-like human form is squished and flung place to place in a cavalcade of slapstickery?

Doing it with three friends.

You know what to do.

A Hat in Time

You’ve crashed your spaceship on a strange planet and there’s only one thing to do; gather yarn so you can make some new hats and get out of there.

This utterly charming platformer was a critical smash when it released, and it’s just as perfect now.

And of course it’s filled with hats, which as Valve knows makes everything better.

Otherwise known as ‘I’m not crying YOU’RE crying: the game’, Ori and the Blind Forest is two things; it’s a metroidvania where you unlock new areas by getting new skills, face down enemies, and jump your way to victory.

It’s also a beautiful and heartbreaking adventure about love, loss, and friendship and what anger does to you.

Get it now, you will not regret it.

This platformer is just pure. It’s about running, jumping, smashing enemies, cleaning up dust, and getting high scores and fast times.

It’s absolutely crisp and plays perfectly. If you want a challenge (and want to hear some great tunes) then Dustforce is for you.

Stacking is the answer to the question that’s been bugging us all: what would the world be like if we were all matryoshka dolls?

This adventure game sets you free as a tiny little doll who can hop inside larger ones to unlock skills or access areas you couldn’t otherwise. It really has to be played to be understood, it feels wonderful from the sound to the visual design, and every moment is drenched in joy.

If you like horror and don’t mind jumping the hell out of your own skin, get Kraven Manor.

Take your landship right, as far right as you can go. This game alternates between puzzle solving, trying to get your landship over or through obstacls, and beautiful scenic moments where you stand on deck and watch the world go by.

If you want a beautiful world to spend a few hours in, and one that’ll stay with you far beyond the time you played it.

It’s been ages since Portal and Portal 2 came out, so why aren’t we seeing more narrative first-person puzzle games?

Thankfully the QUBE series are here to save us, the first was a cracking game and the second is even better. You’re Amelia Cross who’s stranded in an alien landscape, and with nothing other than your own hands (gloved in alien technology) it’s up to you to find out what’s happened and why you’re there.

You have to recruit mercenaries to explore derelict spacecraft in order to scavenge for supplies and allies but be warned; not everyone will be happy to see you out there in the coldness of space.

You can see the full sale here, and don’t forget that the Weird and Wonderful sale is on until the 11th, so act now if you wanna get good games for less. Just remember to use WAW20 on checkout for ultra-savings.