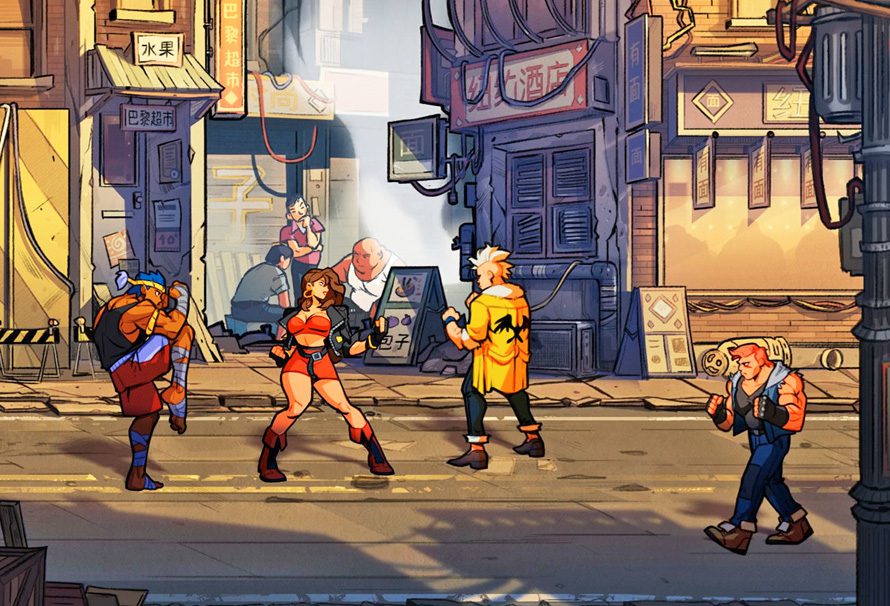 At EGX 2018 we sent roving reporter Jason Coles to meet with the people behind some of the most exciting upcoming games and get us some juicy scoops. You can see the others here, but meanwhile here’s his interview with Cyrille Imbert from the team behind Streets of Rage 4:

So I am here with Cyrille Imbert From the team behind Streets of Rage 4 among other things. So, and I’m sure other people have asked this, how has this happened?

Well it is a combination of different factors but the main thing is the success of Wonder boy. The team specialises in retro games, we worked on Windjammers, Ys, Wonder boy, Double Dragon, and many different titles. So Wonder boy was a success for some reasons that we know, so we can reproduce those and push it further with a maybe a bigger license or a more ambitious project. I really wanted to work on a Sega licence because I was a Sega kid, so I was like okay, what can we do next. Streets of Rage instantly came to mind, it’s such a cool game and I was such a fan when I was young, so we started to think about it.

Then we needed the teams, so I started to talk around and when we were having a drink with the artistic director behind Wonder boy, he’s a great artist, but I wasn’t sure if he would be into it. He was like “What really, you want to do that?” and I was “Yeah I just didn’t know if you be down for it” but he was down so I was like yeah let’s work on that. A week later he sent me some drafts of Axel and Blaze and I thought it was super badass so I just said okay, let’s do it. Then we needed to find another team for the programming and game design and our game designer has another game company who have been working for ten years on a beat ‘em up. It is a small but very active community so they have been constantly improving their beat ‘em up all the time. It’s not the prettiest thing but it is great in terms of gameplay and in terms of features and everything. So they know everything about beat ‘em ups, he said that yeah they are free and would be super down to work on Streets of Rage. So that was a great fit, we talked about it together and decided to talk go to Japan and see what they think. We made a whole presentation with the whole concept and our vision and everything and they liked it right away. So after we started discuss and everything and then it was real. So yeah, that’s really how it happened.

So what was the immediate feeling of you and your team after the internet lost its head after the announcement?

Ecstasy? It was really nice, I wasn’t expecting that much enthusiasm around the game I know it’s a big game and I am a huge fan so I would have gone crazy if it wasn’t me doing it, but I was not expecting that much. It is great it means that there’s a whole community behind it, a lot of people expecting great things. So it really motivates us to go even further, to really do our best and deliver something that as fans we would want to so, but also as people from the industry see what we would like to bring to the series as a modern game. So it is super exciting, it puts a bit of pressure on us but a very positive one.

You’ve used the same art style as in Wonder Boy, why this art style and not something like pixel art?

So, basically it doesn’t really matter. What matters most is the team behind it and the talent. One of the things we learned at DotEmu is that the project that works is the project with the passionate people behind it. Otherwise when you work on retro games or an old licence it won’t really work or it won’t work at all. So you need to have passionate people that know the game by heart, and these are those type of people. They know Streets of Rage and they’re passionate about it, plus he’s a great artist. The animation he does he is insane, you saw it in Wonder Boy. So that’s it, we didn’t think that we would go for pixel art or HD or whatever, we think about who has the passion, and that’s it. He could have been a great pixel artist and we would have done pixel art, we didn’t do a study to say that HD would get the best reaction so we went with that, it doesn’t matter. As long as it’s beautiful and it’s super cool to play that’s the important thing.

So far we have Axel and Blaze but will there be other characters?

In the first Streets of Rage you could call in a police car, in the subsequent games you have special attacks. Which one are you going for?

Right now we have already integrated special moves. We can’t say for certain what will or won’t be there, but I can say that the game designer is a semi-pro player of Street Fighter 3rd Strike so he has a good idea of bare knuckle fighting and how it should feel and the mechanics behind it. We don’t want to make a fighting game, it’s a beat ‘em up so it needs to be simple, but we feel we can add more depth too the game to make it more interesting and give more options and strategies. Again, it is a mix between legacy and modernity, you’ll see.

So does that mean that there’s a chance that there will be a command list for the characters?

Potentially, I don’t know if the game designer’s idea is to make it that complicated. That’s not the idea for now, unless we find something really cool to do. But we don’t want to make a fighting game, we want to make a beat ‘em up, simple.

Will there be both online and offline co-op?

Yes of course there will be co-op for sure. Without online co-op it would be a shame, so yeah.

One of the things that defines Streets of Rage for a lot of people are the stranger fights like the kangaroo, have you got some more crazy fights planned?

Yes of course, the Streets of Rage universe is super crazy. It just doesn’t make sense, so we are totally into it. We aren’t trying to be super serious, it’s not what we are going for. So it is a mix of fun and just crazy action.

Going back to the art style for a second, Axel has a beard now, does this mean that this game is a sequel rather than anything else?

In which case will we be seeing other enemies returning from previous entries?

Who did you used to play in Streets of Rage?

I used to love skate.

I was always more of a skateboard guy, so roller blades were never for me. But I know a lot of people love that character but I never really got it, I mean Blaze is so much cooler. We do know he’s a very important character, so we can see what we do with that.

Which of the original three games is your favourite?

The second one definitely, the music, the gameplay, the general flow.

Will you be having the same composer as the original games?

So the music is one of the most important parts of Streets of Rage 4, probably the second pillar after the gameplay. So it is super important for us, we are talking to a lot of very talented people, I won’t say names because we want to keep it a surprise so that people get really excited when we announce it. Again, we want to keep the legacy while bringing something new. So we want to keep the spirit and the way it was approached at the time but we want it to be a modern game, otherwise it wouldn’t make sense to be a sequel, we would just do a remake.

Will you be looking to go above two player co-op?

Yes that is definitely something that we would like to see. I can’t confirm it one hundred percent, but it would make sense.

Golden Axe would be nice, Outrun would be really nice as well. I have crazy ideas for those.

Cool, thank you very much anything else?

Streets of Rage 4 has yet to announce a release date or platforms.