Starting Out In Playerunknown's Battlegrounds

If you’re a first timer, or just a qualified loser, then you’ve come to the right place. Because, like you, we were all there once, but now we’re seasoned survivalists and we’ve got all the tricks to make sure you get the all the best loot and know the map like the back of your hand.

First of all let’s talk essentials. What do you need when you’re just starting out, what you can survive without and the gear that if you don’t have 5 minutes into the game, you should just give up now. If you want to read about our full breakdown of weapons, go right ahead.

When you start looting, you’ll be disappointed that all you find is a pistol, a sad baseball cap and a machete. But, don’t worry, a handgun is better than no gun and it’ll make finding that M416 so much more satisfying.

You need somewhere to put all your gear, ammo, medi-packs and accessories. You won’t get far without a backpack and you’ll not want to leave any loot either.

Headshots in PUBG are cowardly and unfair. But not if you’re wearing a helmet! A level 1 helmet may not save you, so try and get an eye out for a 2 or 3.

Body armour is essential to survival and if you do get found and shot at, you’ll be able to withstand that extra shot. Everybody gets one.

A grenade if you’re feeling daring.

There are four different types of grenades, but there are only two if you want to survive. There’s the molotov cocktail, which work great in tight spaces and the frag, for your standard, hard-to-miss shot.

Choose the ruins. They’re usually quiet and you’ll have plenty of room to roam between the structure until you come across somebody. It’ll give you a chance to grab some mid-tier assault rifles, a standard pistol and a shotgun. The shotgun doesn’t come in the most useful here, as it’s not a tight area, but the ruins are packed with accessories, including handy scopes, helmets, backpacks.

Looking for a full run down of the guns and gear in PUBG? Check out the stats here.

When I started out in PUBG I was pretty shocking at parachuting and I needed the help from my pals and some well placed markers to get it right. I suggest hopping into a party when you get started and getting some live tips.

I always look at the compass when I’m parachuting and it helps with the accuracy so I don’t need to keeping pressing M to get the main map up. I’d settle on the perfect direction and then when the marker I’d placed hits SW, it’s go go go!

But, the best thing I found was holding down W and looking in the direction you’re headed and never, never manually release the parachute.

The best locations and what you’ll find 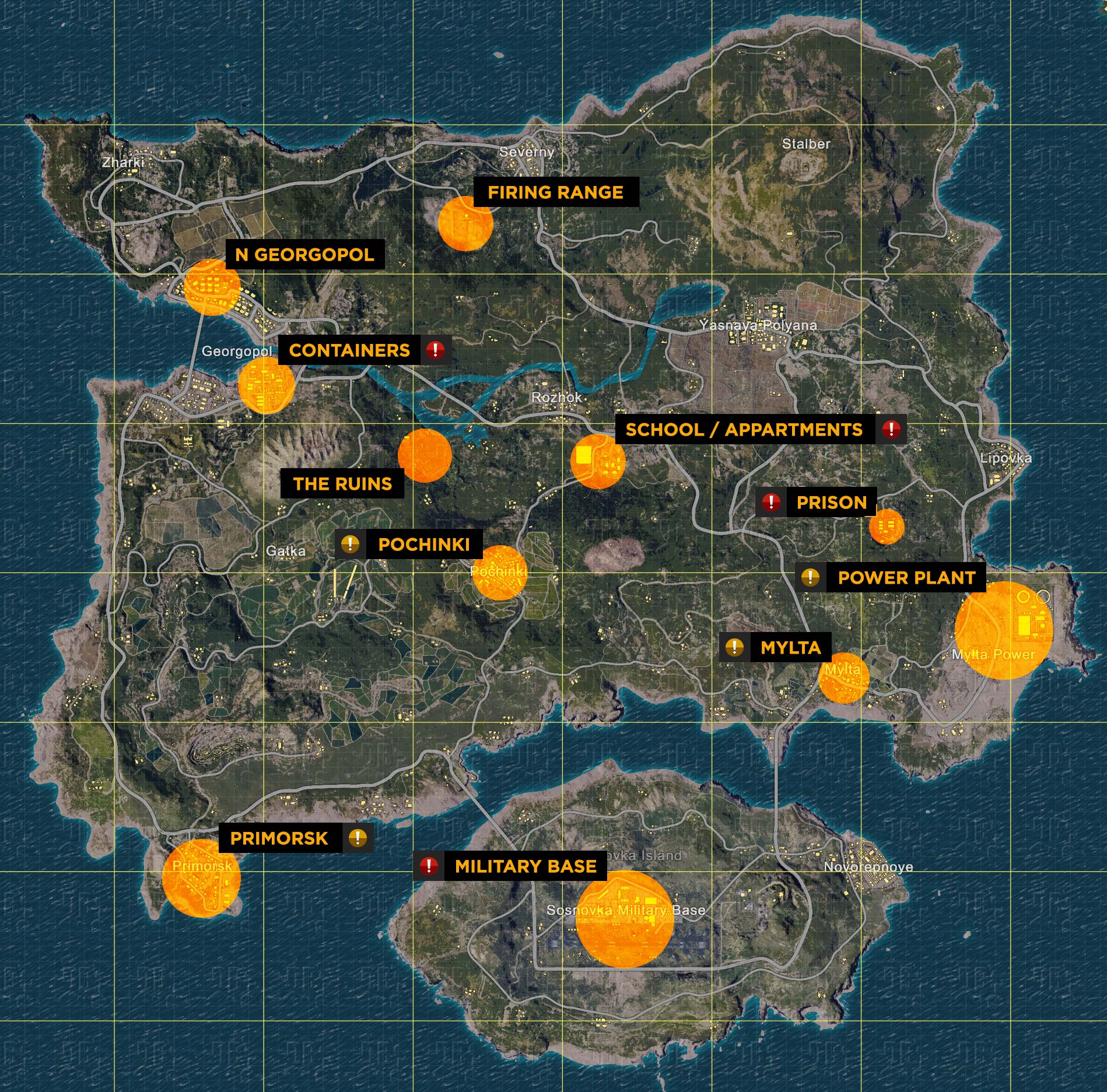 As a rule of thumb, every location with good loot has more potential for a shoot out

If the plane's flight path takes you anywhere near the Georgopol containers you can expect to see an awesome wave of parachutes descend onto the crates and into the warehouses. Don't waste any time to take in this spectacle, you need to find a gun fast. This area is large with lots of cover to protect you so weave in and out of containers and buildings while you loot, don't forget to check on top of the containers as well as inside them. Once you are geared up you're probably going to have to fight your way out, being costal means this area falls outside of the playzone more often than not, so don't muck about!

This apartment dense zone is packed full of loot. Plenty of it is low end or average gear, but the sheer amount of buildings means if you just keep looting you stand a decent chance of finding something that will instill fear in the hearts of your enemies. The containers I mentioned above also do a good job of keeping the riff raff out, so most of the time you can plunder the town uninterrupted by warfare. Just be sure to keep an eye on the play-zone, it’s a long and winding road if it pushes you to the other end of the map.

This area actually has two separate highly contested drop zones but as they are so close together you have to constantly consider the movements of other players in both areas. The school has a large flat roof that is easy to land on and usually has a rifle or two. Be warned, for this reason it is a very highly populated building in the early game. If you land with other players and somebody else grabs a gun first... run! If you are out of time then consider jumping off the side! You'll be a little beaten up but you will survive, it's time to find a gun on the bottom floor. You better do it fast though, the others are descending!

So, I’m a huge fan of the spot just north of Rozhok. There are some houses scattered north of the river and it’s just by a road. So I can quickly get my bearings, have a light loot and get some okay gear and then find a car/motorbike (usually found on the side of roads) and zip off to the best spots.

TIP: If you do get in a car, abandon when roughly 50 people are left as it’s makes it really obvious when you’re sneaking up on a house or area.

Found South West of Severny, most the players will be headed for that smallish town, but where you really want to be is The Firing Range. It’s not a great spot for when the blue circle of doom starts to roll in, but you’ll have plenty of time to get some great equipment, it is a firing range after all. Helmets, shotguns and accessories galore!

The prison is both a great place to get geared up quickly and to fall into another players trap. There is only one way out of this area, large cliffs funnel players into a narrow choke point with plenty of places for players with rifles and snipers to set up ambushes. For this reason we have marked this zone as dangerous. The rewards can be great for the victors but you're going to have to use the environment to your advantage to get out of this death pit.

The Ruins as discussed is a great spot for beginnings. There’s SO MUCH loot and it’s all really exciting. Just make sure you keep your head down and be careful when ascending to the church on top of the hill nearby. It might seem like a good idea, but don’t be too confident!

A central large town makes this zone desirable to transition into the mid game. The loot might not be quite as rare as some of the other hot spots but there is plenty of gear good enough to get you to the end. When the play zone starts to close in you won't find yourself in a desperate situation like you might if you go to a coastal town. A solid choice but often occupied with your enemies.

Like school / apartments this area has two high level loot spawns. The main power plant (look for the enormous chimney) and the multi tier industrial building to the south-west of the power plant. The high quality loot often draws other players here, if you're unlucky the play zone can be just as deadly as players however. If you find yourself having to travel the entire length of the map to the north-west then don't spend too long looting here, find a car and get going.

A large town crammed into a peninsula on the south-west edge of the map, there is plenty of loot to go around here. In fact unless you're a squad of 4 you probably won't have enough time to loot the entire thing before you are shepherded off by the play-zone. Whilst you might have to share the town with a few other people, your biggest enemy here is time. If the first play-zone pushes you across the map then do not get greedy, you have to budget a few minutes into your plan to find a vehicle, be it land or sea. Your loot is no good to you if you ultimately turn into fodder for the blue circle of doom.

The big one, the zone everyone wants to conquer. If the plane flight path is near this small island you can bet your last medkit that you and several other players will land here. The loot is usually very high level, but the actual compound is a maze of sniper towers, derelict buildings and a perfect ambush location around every corner. You're going to have to fight your way out, oh, you think it's all over? Now you have to cross one of two bridges that are most likely being camped by your enemies. Do not run across! Either take your chances in a car or find a boat on the coast and avoid them all together.

Tip: If the plane flies nowhere near the island and you find a car somewhere else then drive it over to the base before anyone else does. If you do it fast enough you can have all of that loot to yourself.

An average sized town with average loot, it's location makes this area less desirable than somewhere like Pochinki as the potential to be out of the play-zone is higher. However, it offers an interesting strategy. It's just a short jog down the road to the East bridge leading to the military island. As mentioned earlier you can set up camp around the bits of debris and buildings at the end of the bridge and wait for the play-zone to push your enemies to you. Start shooting when they get half way across. Congratulations, you just had the best loot on the island delivered to you!

What Is Playerunknown's Battlegrounds?!

PLAYERUNKNOWN'S BATTLEGROUNDS is a Battle Royale game running on the Unreal Engine 4, developed and published by Bluehole. PLAYERUNKNOWN is previous modder Brendan Greene, who was responsible for the battle royale mods for DayZ and was a consultant on H1Z1, and has now developed his own version of the game with the South Korean developer.

Now you have friends to assist. More eyes, more noise, more mouths to feed. You will no doubt need to change your chosen landing spots to accommodate more players as you will need moreguns and equipment.