If you’ve paid any mind to games news this year, then you will know that Conan Exiles has made many a headline since releasing into Early Access in January and shifting 320,000 units in its first week. Now, some 24 updates later, the game is continuing to show some real promise for its Early Access buyers.

There have been an awful lot of multiplayer survival games released into early access of late but this one is a little different. Beautifully designed in Unreal Engine 4, darkly funny (if you find breaking thralls on the Wheel of Pain funny), highly NSFW and with an awful lot of big plans for the future. If you want to still be around for some of the exciting updates on the way - seige warfare, attacking NPC hordes and whole settlement systems - then you’ll have to learn how to survive those first few hours! Here are our top tips for beginners:

Getting started in Conan Exiles:

Find the right server for you

All of the servers for Conan Exiles are set up for a different style of play, with modifiers on the survival elements like hunger deterioration, XP bonuses for those who want to level through the game faster and of course PvE or PvP. Take some time to find the right one for you before diving in!

Well it might seem obvious to some but the desert isn’t a particularly friendly place to folk who have not a shred of clothing to cover themselves nor a drink to keep them alive. You’ll get dehydrated very quickly and that is a surefire way to have your first live in Conan Exiles be somewhat underwhelming. You should find a waterskin near your first spawn location and after that, keep your eyes out for trees and find yourself an oasis.

No really, EVERYTHING. Branches, stones and plant fiber are used to craft a lot of starting items and remain useful at later levels. You want to play Conan Exiles like a desert-bound kleptomaniac.

Eggs are good for you

In the early stages, starvation will definitely kill you. Conan doesn’t go easy on the old nutritional needs and eggs are one of the easiest sources to keep you alive long enough to craft a weapon and get some real meat.

Sleep is for the wicked

And also for those who don’t want to lose everything. Beds are respawn points, so you should make getting one your top priority, otherwise you are doomed to respawn back at the start and begin the long walk back to wherever you call home.

Killing stuff is the quickest way to gain XP, so as soon as you have a sword and shield, a bed to respawn at and a storage box for your stuff, you should focus on killing everything that you can and get yourself to level 10, which is where things get really interesting!

This is a game that is much easier to play with some friends. Crafting later on requires a lot of resources and if you want to have a settlement with lots going on and lots of thralls to do your bidding, it’ll be a lot easier (and more enjoyable) with some friends - so get making some pals in game! 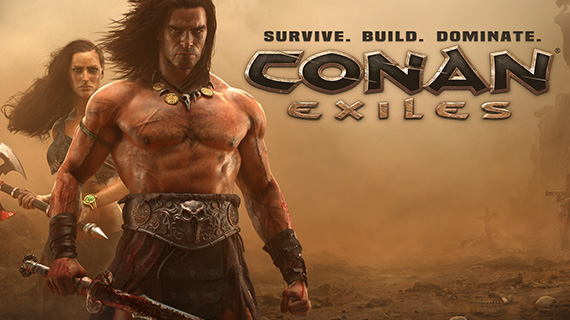