Now that the final update for Resident Evil 7’s ‘Beginning Hour Demo’ has finally been released. We thought it would be a good idea to answer the question that has been plaguing players minds since the demo was released. Why is there a Dummy Finger in the Resident Evil 7 demo? We finally have an answer and have come up with a step by step list to give players a helping hand or more likely a helping finger.

The Dummy Finger is crucial to solving the 5 murders within the Resident Evil 7 Demo. In order to solve these murders you must first collect: 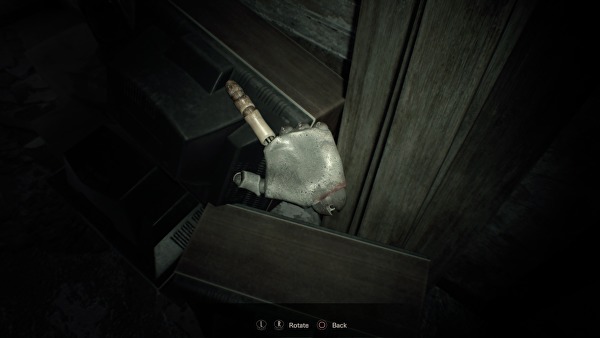 With both the Dummy’s left hand and the Blank notebook in your inventory you can now investigate the 5 murders. This is where things get a little tricky as most steps require you to look at a specific point in the environment and then open the inventory and select the Dummy’s Left hand. You will then need to point it to somewhere specific in the environment. It does sound a little confusing but do bare with us as all will become clear in the steps below.

1. At the bottom of the stairs on the ground floor you will see a fallen bookcase. Open the Dummy’s left hand in your inventory and point the finger at the bookcase until the controller vibrates. This will then add the first passage into the blank notebook. 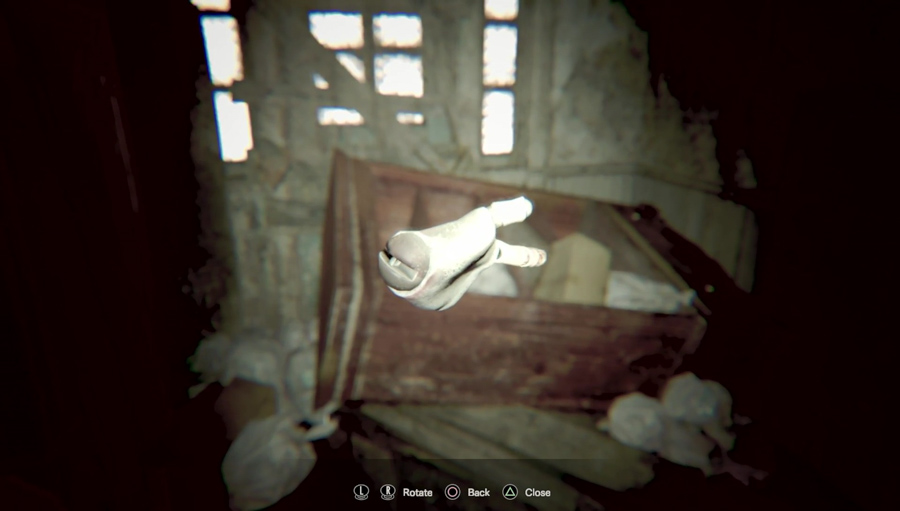 2. Go up the stairs until you get to the attic. Straight after you have ascended the staircase walk past the first room and around the corner, you will then see a light in front of you, go up to it and look at it to trigger off a giggling sound. Once this has happened you are going to need to grab the keys which are by the bed in the attic room and head downstairs and through the ‘Moulded Corridor’. At the end of the corridor you will see a gate which you can now open. You will then be lead to the basement where a Moulder Monster is being held, it is crucial here that you avoid being attacked by the monster and that you grab the vale wheel and the attic key. Once this has been accomplished kick down the door, you have come through head back up the stairs. This should trigger the monster to ‘de-spawn’ meaning you can walk into the room again without being attacked. Once in the basement point the dummy’s left hand at the body bag laying down on a bed at the back of the room. This should trigger some noises and another entry in the notebook.

3. Now you need to get the handgun from the bathroom. The bathroom is found just off of the moulded corridor, use the valve wheel on the pipe in the bathroom then flush the toilet, retrieve the handgun from the toilet bowl and then go to the bottom of the stairs on the ground floor. On the wall above the stairs you will see a picture of someone in a hood. Shoot at the picture and another giggle will trigger. You will then need to locate the small room under the stars and point the Dummy Finger at the door. The controller will vibrate to confirm another murder has been solved. 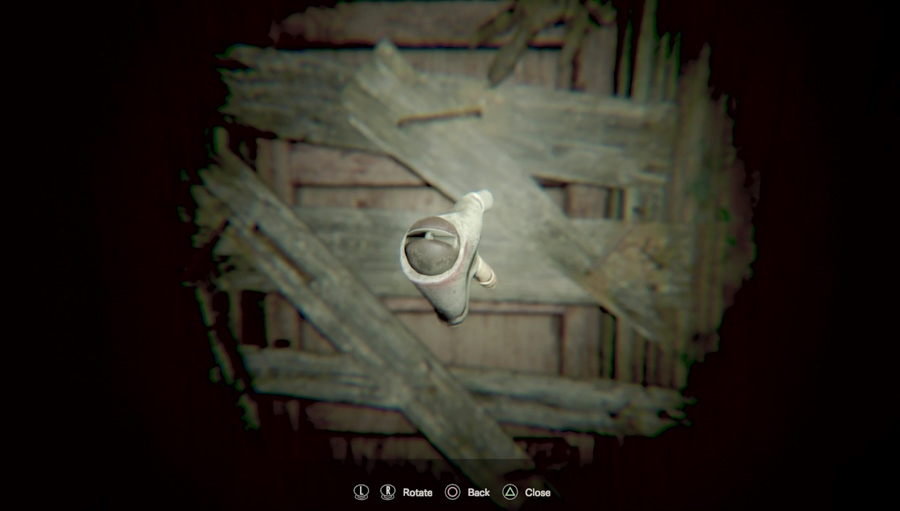 4. From exactly where you are stand in the doorway underneath the stairs. Look in the mirror and then do a quick turn with Circle (or B on Xbox) and then another so you are looking at the mirror once more. This will then trigger another giggle. You will need to head into the attic once more and go to the back left corner of the room. Look up and locate the blue and white wires hanging from one of the wooden beams. Point the Dummy’s hand at the wires (this could take a couple of tries) the controller will vibrate once successful and another entry will fill the notebook. 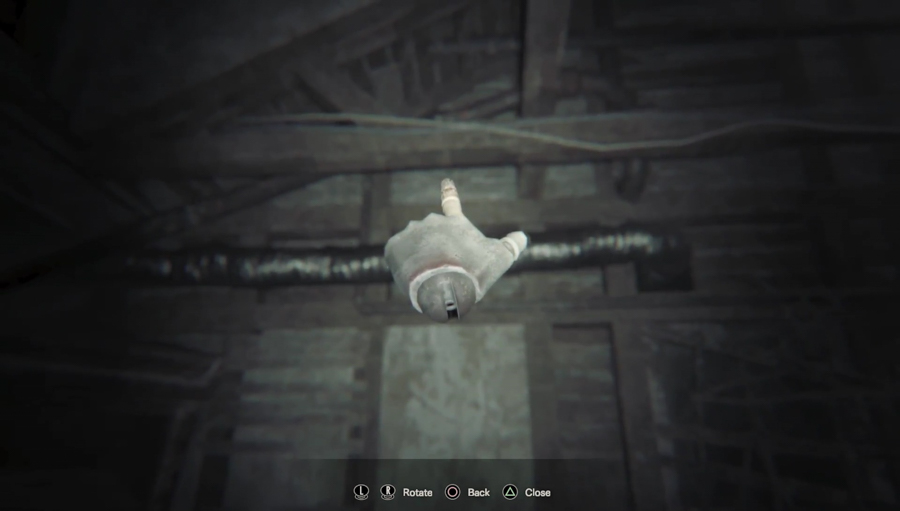 5. Play the ‘Derelict House Footage tape’ VHS. This can be found in the chained cabinet in one of the first corridors. Play through the flashback as you would normally.

Once the flashback has ended, head back into the basement, the monster should've still despawned like in step 2. Look at the doll on the floor, this can be found in the corner of the room. Once you look at the doll another giggle will trigger (if a giggle doesn’t trigger you will have to play through the tape again and then try again). Once the giggle is triggered, head into the kitchen and open the large cooking pot on the table, point the Dummy’s left hand at the cooking pot and your controller should vibrate and the last entry in the notebook should be filled. 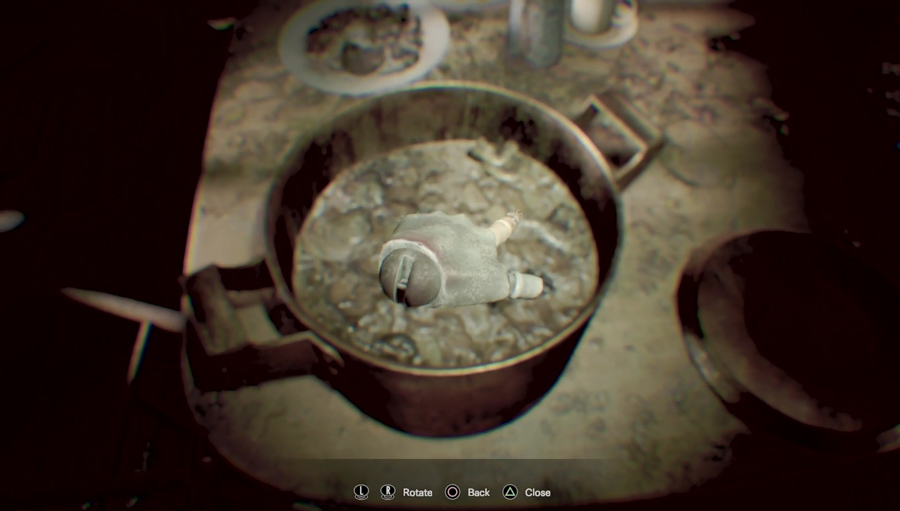 Now that all five of the murders have been solved go back up t the attack where the door in the corner should be unlocked. Enter the room and investigate the chair to find a dirty coin. It has been said that the coin will unlock some additional content for you in the full Resident Evil 7 game.