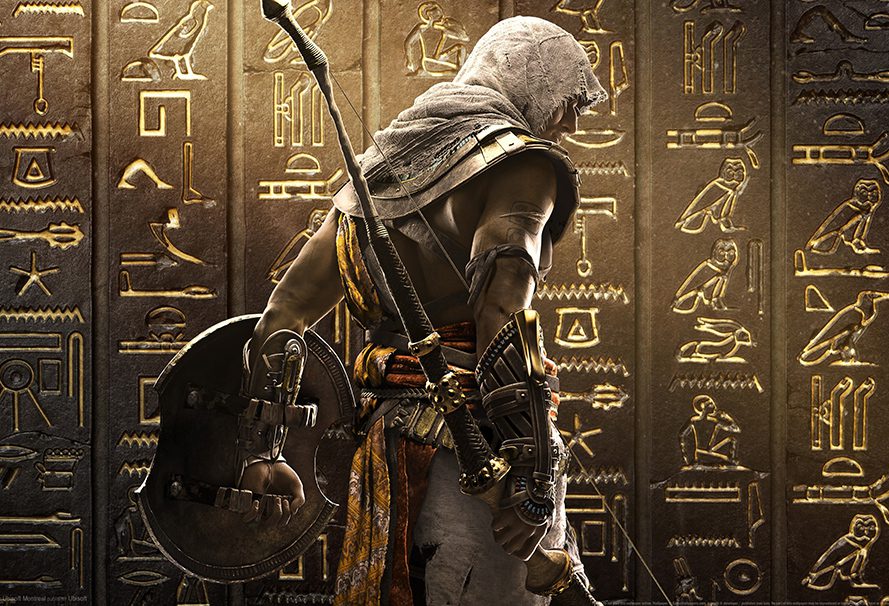 There are a lot of gamers who stopped playing Assassin’s Creed right after III. I get it, III was the low point, and you got burned out on the whole concept of the series. You missed out on the rest and that’s fair enough. Maybe you dipped back into a Unity or Syndicate and still the problems you had with the series persisted.

Here’s 6 complaints that I’m happy to report are addressed in the latest Assassin’s Creed, Origins.

Complaint: “The combat is too easy. Press ‘counter’ and win. YAWN!”

So the first Assassin’s Creed brought in it’s own brand of 3rd person combat. Enemies come at you one at a time, a signal flashes, you hit ‘counter’ and gut them. Rinse and repeat. Then came Batman: Arkham Asylum and Shadow of Mordor and made everyone get kind of bored of pressing ‘counter’ to win. Dark Souls didn’t help by coming along and showing that pressing ‘roll’ is infinitely more fun, or even ‘block’. Assassin’s Creed introduced different enemies, enemy levels and weapons but it was no good. The infamous ‘counter’ button wouldn’t shift from the tedious hivemind of the internet…until now.

Origins has no ‘counter’ button. You can now lock onto enemies to focus them, hold up your shield, and the only counter is a well-timed parry that has no prompt. Enemies have no qualms attacking in groups, and gone are the auto-aim ranged weapons. Stealth killing dangerous enemies feels like plunging a blade into the neck of a real pain in the arse that you won’t have to deal with later. Escaping after killing your target ASAP becomes more natural.

Complaint: “They took my dagger and duel hidden blades and axe and-“

Back in Assassin’s Creed 2, you had a load of weapons to play with but the fights almost always ended up the same way. A heavy halberd didn’t really have that much of a different feel then a normal sword. The counter was more fun to watch but there was no difference in feel or skill. That’s why in future games the weapon range shrunk (not to mention in Victorian London wearing a multitude of melee weapons were frowned upon).

Now thanks to the new combat system, you’re going to be extremely chuffed to poke enemies to death with a 2 metre spear, or dance around them with your dual blades as they swing their big dumb mace through thin air. There’s also a metre that charges when you fight, and filling it lets you deal an awesome attack, normally one-shotting foes. The auto-kill button becomes something hard to achieve rather than one button on the controller. There’s also bombs, 3 different types of bows (the shotgun bow is a blast), and plenty of goodies on the tech tree, like different ways to use your shield.

Complaint: “These assassins are definitely NOT Ezio.”

The series started with Altair, a solid 7 out of 10 in terms of protagonists. They then went for Ezio and, over the course of 3 games, encapsulated what we liked about the series. His lifelong fight against the Templars was badass, but he also had the flair and cockiness that made him the Starlord of Renaissance Italy. After that we had series low point Connor, Kenway the pirate was alright but basically just a pirate, I can’t even remember the French guy’s name (Arno!), but he was mostly forgettable. The Frey twins were cool but didn’t reinvent the wheel. No-one has measured up to brilliant Ezio.

Meet Bayek. He’s a Medjay, which is essentially a 00 agent for the Pharaoh. His son is killed and is on the hunt for vengeance with his equally awesome and deadly wife Aya. He’s clever, strong, determined to avenge his boy, but still not afraid to take a side quest where he gets into a drunken fight with an old friend and wakes up in a stable. It’s like they took all the best bits of Ezio (cut out the whiny teenager bit), gave him an Egyptian license to kill, and made him a great guy to boot, with an awesome wife.

Complaint: “How did this assassin know how to assassinate peeps so good?”

It’s only about 2 minutes into Assassin’s Creed: Black Flag that the assassin steals a hood and hidden blade, and is then free-running like a parkour expert, jumping off buildings and doing duel assassinations, and doing the pushing-people-out-the-way thing that ONLY ASSASSINS CAN DO. What gives? I know that having a 10 hour prologue like Assassin’s Creed 2 every game would be impractical – AC3 showed that quite well – but let’s at least be a tiny bit realistic.

Bayek, as mentioned earlier, is one of the most trained warriors in all Egypt. He’s got many years of fighting under his leopard skin belt; hunting dangerous animals is part of his job description; and he’s trusted to protect the god-on-earth Pharaoh, AND his entire village. When we meet him he’s spent a year already hunting down those who took his son, in a rather brutal fashion. He’s ready to be the original assassin.

The most divisive part about the series itself has always been Abstergos, Abstergi, Abstrogon…the present day stuff. It started out with Desmond, the guy who has all the memories of the assassins running through his DNA. They got rid of him and then each subsequent game had another person, ranging from faceless Abstergo employee to with-face Abstergo employee. Either way, it’s always been a drag to be dragged out of the interesting historical setting.

In Origins it feels like they’ve hit just the right amount of present day stuff, even if we all wish they would do away with it. The person you have to play is an actual person with a personality which helps, and you can also do as much or as little in present day as you like. You can nope the hell out of there and jump straight back into the animus if you choose. No more running around as Desmond, and no more Danny Wallace.

Complaint: “This game has too much sea/open space/wilderness/not enough variety.”

We started off with a couple of cities to play with, then it was one city, then another, with a bit of countryside, then more wilderness than town, then the whole Caribbean, then another big city…you get the idea. Fans of the series have their opinions about how much building they want, how much open space and how much space for their great galleons there is.

It’s not Paris, and it’s no Caribbean, but the map in Origins is huge, and goes from Oasis towns in the desert, to Alexandria with it’s huge libraries and lighthouses, to various rural zones that do feel different. And you get around on a camel, which is cool, or a chariot, which is even cooler.

Agree or disagree? Let’s take the debate over to the community.