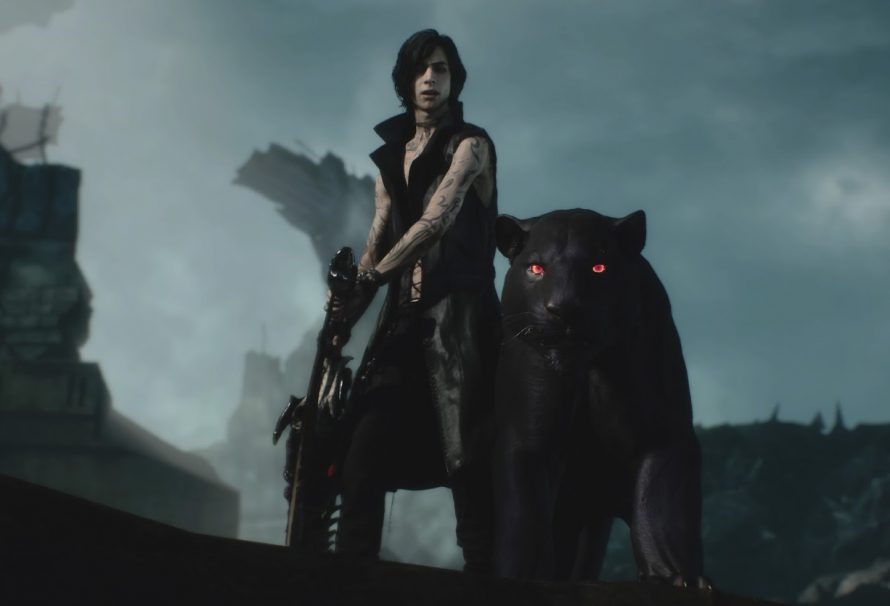 Major spoilers for Devil May Cry 5 are contained within this article.

Devil May Cry 5 excels at intertwining tremendously enjoyable gameplay with a world which emits a sense of ecstatic awe from us as we venture through the desolate hellscape which has grasped the city of Red Grave. Main protagonists Nero, Dante, and V all share a similar motive to viscously eradicate the demons roaming the streets. Needless to say, each protagonist has their own endeavours which they wish to undertake. No other protagonists ultimate goal is as mysterious as that of V’s. The character of V exhibits a sense of mystery from the very flourishing moments of the story; making us question if he has any more sinister intent held captive within his soul.

Who is V? What is his story?

V has a convoluted past which he has evolved from; born from Dante’s brother Vergil when he separated his body into two parts: demon and man. Vergil is the main antagonist of Devil May Cry 5 who has become a mass of twisted flesh exhuming abhorrent nature after separating his former self in two. Namely transforming into “Urizen”. There is no crystal-clear correlation between Urizen and V until later in the story when V combines himself once again with Urizen, transmuting himself back into one amalgamation of both counterparts. V is the embodiment of mystery and uncertainty which makes V such a compelling character. This all interlinks with the thought-provoking writing which is present throughout the entirety of the plot.

Philosophy, mystery, and a whole lot of William Blake references.

Games can draw out many different emotions from us but nothing is more powerful to draw out these emotions than writing which transcends familiarity. V’s writing has been intricately crafted to ensure players have different opinions about V’s true motives throughout the story. V is trapped within a constant perceived state of preternatural alienation for being different from everyone within the world, his only true companions may be seen as his “minions” Griffon, Shadow, and Nightmare. Although he is polite to everyone he meets, there is still something which is hidden underneath the surface, simmering steadily beneath his softly spoken voice.

V always has a book by his side to read from; it is obvious that V takes effusive amounts of pride in being able to articulate his thoughts through not just his own words, but others whose work has been passed down for generations. There is vital significance held within the quotes that V says throughout the game. Before we can have a look at these quotes we first have to understand and analyse V’s own inner cerebral consciousness. The most prominent piece of narrative which allows us to do this is as follows: “I’ve tried to hold together my crumbling flesh with whatever demonic power I have left but… I’m approaching my limit. In separating and regaining my human soul, I’ve realised the gravity of the crime I’ve committed. I’ve realised how important everything was; everything I’ve thrown away in my pursuit for power.”

Not only does this quote showcase V’s sense of reality but it showcases that he realises how futile his journey really was. He has given up hope for the power he sought knowing that he cannot venture too much further without falling to the cracked ground beneath him. There is a clear aspect of both Existentialism and Nihilism exhibited here at the same time, V chooses his own fate. His own choices. V is not Vergil nor Urizen. He is V, so he has his own will, it is not shared but he realises the eventuality that it will be if he wants to live.

As aforementioned, the poet William Blake is a prominent subject in V’s mind who he clearly takes inspiration and comfort from. Intriguingly the poem which V quotes the most from is Proverbs of Hell, fitting is it not? Considering the universe of Devil May Cry. The writers of V have devised perfect symbolism which links to V’s motives. Proverbs of Hell is not just any poem from Blake’s work—no—Proverbs of Hell is a tale about a god manifesting itself in the human mind. Akin to the link between V and Urizen, everything interconnects and through these references we gain a much more coherent understanding of V. “If the fool would persist in his folly, he would become wise.” Just as V persisted in pursuing Urizen and his eventual fate, he became wise and stronger once again by becoming Vergil.

V enraptured me throughout my playthrough of Devil May Cry 5 for his uniqueness and diverse writing. After finishing the game I immediately began learning more about V and I wanted to share my findings with you all. I hope that this article has allowed you personally to garner further knowledge about the character. Now if you’ll excuse me, I have an abundance of demons to slay once again… and perhaps some William Blake poems to read on top of that.

So who’s your favourite Devil May Cry Character? Comment below and join the Green Man Gaming Community site to join the conversation with all our gamers.