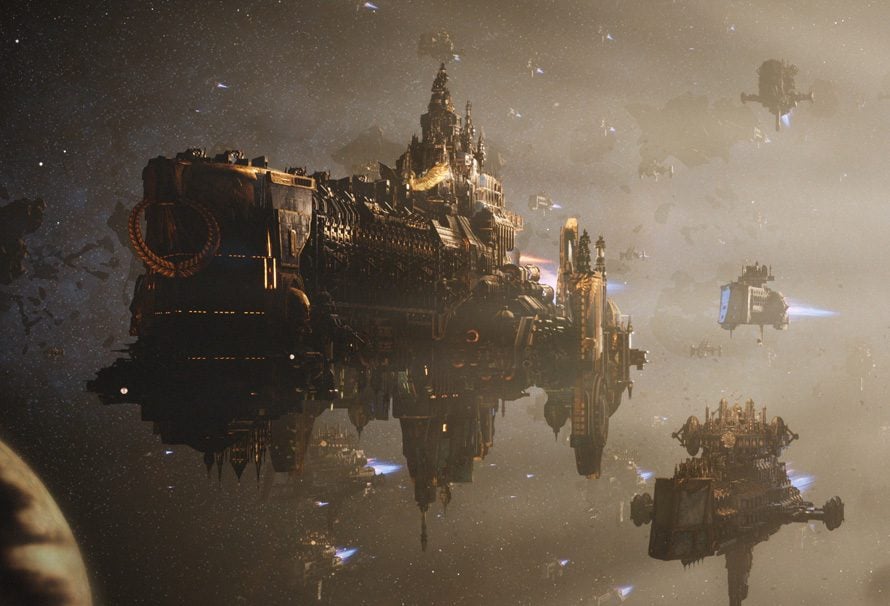 Battlefleet Gothic: Armada 2 comes out on the 24th of January, bringing a bigger and better look at the space battles of the 40k universe right to a PC near you.

The original was a great RTS but Battlefleet Gothic: Armada 2 is a true monster. It’s a true adaptation of the spirit of the board game, as well as the atmosphere and hyperbole of the amazing 40k universe. Bigger in every way than its predecessor, if you care about ship battles, space battles, or 40k, this is going to be something that demands your attention.

With its imminent launch, its the perfect time to whet your appetite for some naval-inspired space-combat, all served with a side of grimdark. Let’s take a look at five of the best space battles ever in Warhammer 40k.

Note: Some may notice that these are mostly set during the Horus Heresy. I’m going to make a ruling here that the Horus Heresy falls under the umbrella of the 40k universe. Also they had to be from Horus Heresy novels as there are fewer battles described so well in other novels.

Note 2: Spoilers for the following books: Battle for the Abyss, Betrayer, Blood Reaver, Betrayer, Know No Fear, and The Crimson Fist.

Battle for the Abyss – The Battle

Unlike most novels in Warhammer, this one focuses entirely around one huge space battle, the titular Battle for the Abyss.

Spanning multiple systems and with a huge toll in ships, the battle to prevent the Furious Abyss from pulverising the Ultramarines core systems with virus bombs.

There’s a real sense of desperation throughout the multiple skirmishes that make up the larger battle. If the Furious Abyss makes it through, that’s it for the Ultramarines, they’d be crippled beyond recovery.

With limited resources and many desperate plans, the loyalist forces eventually prevail. Showing that sometimes you can win even with a bad hand.

The universe of Warhammer 40k is ridiculous. That’s part of why everyone loves it so very much.

But there are few things as ridiculous as the Ursus Claws,

The World Eaters’ Gloriana-class battleship The Conquerer comes equipped with a full array of Ursus Claw systems, vast harpoons attached to giant chains that spear the enemy and drag them in range of boarding actions.

In Betrayer, we get to see these claws in action. The World Eaters, thirsty for blood as always, hunt in space much like they do on the ground. Up close, spitting blood in their foes’ eyes, and tearing their opponents to pieces.

It’s entirely fitting that their flagship is equipped with vicious tearing weapons that shouldn’t work, but absolutely do. Seeing them described in action is absolutely stunning.

No-one really likes The Exalted, the commander of the Covenant of Blood, but you can’t deny he knows his strategy.

A smaller ship than many, the Covenant of Blood relies on hit and run tactics to stay alive. But that doesn’t mean it can’t hit back, and hit back it does.

During the recovery of the Echo of Damnation, a former Night Lords ship the Red Corsairs had commandeered, The Exalted knew that the Covenant of Blood wouldn’t survive. But that didn’t stop the ship diving into battle, over and over, to protect the boarding crew retaking the Echo of Damnation.

Through skill and cunning – and a truly thrilling space battle – the Echo of Damnation was recovered. The Exalted and the Covenant of Blood, however, faired less well, but they took their toll in Red Corsair blood before their destruction.

Know No Fear is probably the most thrilling book in Warhammer, it’s tense throughout and the first half of the novel where a battle is coming, we know it’s coming, but the unsuspecting Ultramarines don’t, is astounding.

The first shot of the Battle for Calth happens personally, privately, between friends. But it’s what happens up in space that makes the moment of treachery that much more impactful.

Imagine this, the Ultramarines don’t know they’re at war with the Word Bearers yet, so when the Word Bearers arrive at Calth to join forces and refit their ships there’s no suspicion of a problem. Except you know, reader, you know that shit is about to go down.

The Word Bearer ships are docked, a cruiser approaches but won’t answer hails. It all seems normal.

Then it happens. The cruiser speeds up. It had been captured hours before, and was now a ship-shaped bullet aimed at the heart of Ultramarine defences. Those Word Bearer ships? They were still running hot whilst in dock, their weapons ready to unleash hell.

It’s terrifying and exciting and honestly, needs to be read. The treachery in space at the start of Know No Fear is absolutely Warhammer at its finest.

The Crimson Fist – The Battle of Phall

Sometimes there’s no clear winner in space. Becalmed in the Phall System, an Imperial Fists fleet spent its time drilling and waiting for the Warp to clear again.

The Iron Warriors found them first.

Careful preparation meant the Fists were not so easy a prey, and launched a counterattack. The Battle of Phall raged on with neither side able to land a decisive blow. It was only upon hearing Rogal Dorn’s psychic message that the battle ended, leading the Imperial Fists to retreat under heavy fire and sustaining losses.

Like other legions, both fleets here behaved exactly like their ground counterparts. The Imperial Fists were prepared and well defended, and the Iron Warriors relied on numbers and attrition to win.

Battlefleet Gothic: Armada 2 is launching on the 24th of January 2019. Pick it up now, and maybe you’ll be spinning your own tales of the wars you’ve fought in the Gothic Sector with your own fleet.