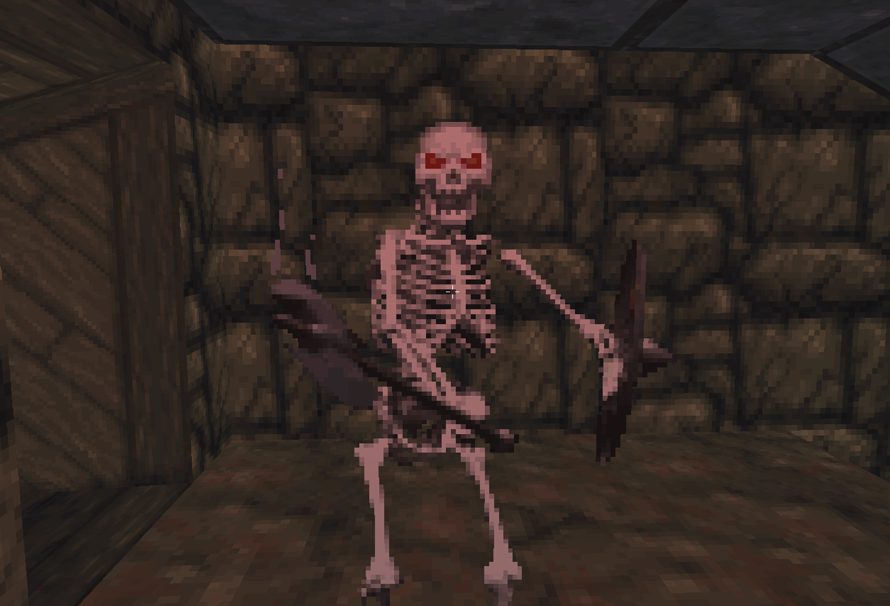 As we’re excited about the upcoming Elder Scrolls Online expansion, Morrowind, I thought I’d take a look back at the game that started it all for me. Daggerfall is the best Elder Scrolls game, and that’s hard FACT. I’m your host, Alex, and I’m here to answer the burning question: Why is Daggerfall so damned good?

The best thing about Daggerfall is the box art. I mean just LOOK at that. The flesh peeling away from the skull, the crown, the threatening claw. You just know something horrible is going down in Daggerfall town. It’s meant to be King Lysandus and his appearance in-game isn’t quite as terrifying, but it’s scary enough to entice a young person into buying the game, all the while being asked by their parents ‘are you sure you’re old enough to play this’.

A question a parent should never ask, they’ve already lost at that point.

Before the Elder Scrolls series took a turn into clarity, it dabbled in complexity. You have a whole load of skills and traits you can play with when creating your character, and to this day I still don’t really know what all of them do. Dragonling for example, a language skill for talking to dragons. Can you actually talk to dragons? Not in my experience, the little chaps still run at you all fireballs blazing! But for flavour that can’t be beaten, because it lets you do…

Want to be a Khajit thief who dresses only in ninja outfits and who takes to the towns at night to prowl from rooftop to rooftop? You can!

Want to be a valiant Orc knight, clad in the heaviest armour and who only speaks Orcish? You can!

The skill and trait system in the game meant there was a lot of wasted space and stuff that didn’t have much use outside of flavour text, but it really helped sell the idea that you were building your character, much more so than in later Elder Scrolls games. You could be a scholar who spoke Dragonling, and whilst that might not make much or any impact on the game, it made you feel more like you’d made your own character.

Daggerfall dungeons are tough, not only because of rabid denizens hunting for your blood, but because you would get lost SO much in them. This was because they were made up of sections that are combined into a thousand thousand different combinations. It meant that your experiences were different almost every time, and they were HUGE dungeons, with massive puzzles involving rotating sections and all sorts.

Later Elder Scrolls may feature more curated experiences, but Daggerfall really had a feeling of delving deep into forgotten places.

Although ropes were dropped from the game (after the manual was printed), climbing walls still made it in. It meant you were a creature of VERTICALITY, not just plodding on the floor. Well, if your skill was high enough anyway. Locked out of a town because you’d got home late? Up the wall you go, but make sure you’re not seen because…

OK maybe a bit more to be said. They chase you in their hordes if you do anything wrong. Or rather, if you get caught doing anything wrong. A vast tide of guards can be seen in many cities in your wake, all bellowing HALT like a series of fantasy Terminators.

Legend has it, that killing a few guards and then doing some time is a good way to enter the Dark Brotherhood. They’re always watching…

Daggerfall is smaller in scope than Arena which let you roam across the entire of Tamriel, but it’s so much larger than anything that follows it. The Iliac bay is huge, and ranges from seas to tundra to mountains to desert, and you can walk over every inch of it!

OK it might be a little samey, procedural generation being in its infancy, but you *can* do it. I remember being incredibly excited over walking from one town to the next, it blew my tiny little brain! Even if it did take me hours.

Much like the other games you could meet up with the Daedra, do quests for them, and then get powerful rewards. But there was something wonderful about seeking them out in Daggerfall, as unlike later games they wouldn’t have a giant statue, you’d genuinely have to go out and ask around, follow the trail until you finally reach them and begin your journey to becoming blessed by a demon.

9. Just So Much Stuff To Do

You can also become a Wereboar. Best game material, right there.

What do you think of Daggerfall? Let us know in the comments or on our social media channels! Daggerfall is also FREE on Bethesda’s website, so check that out!

Also remember, if you’re EXCITED to go back in time, The Elder Scrolls Online: Morrowind is coming soon!