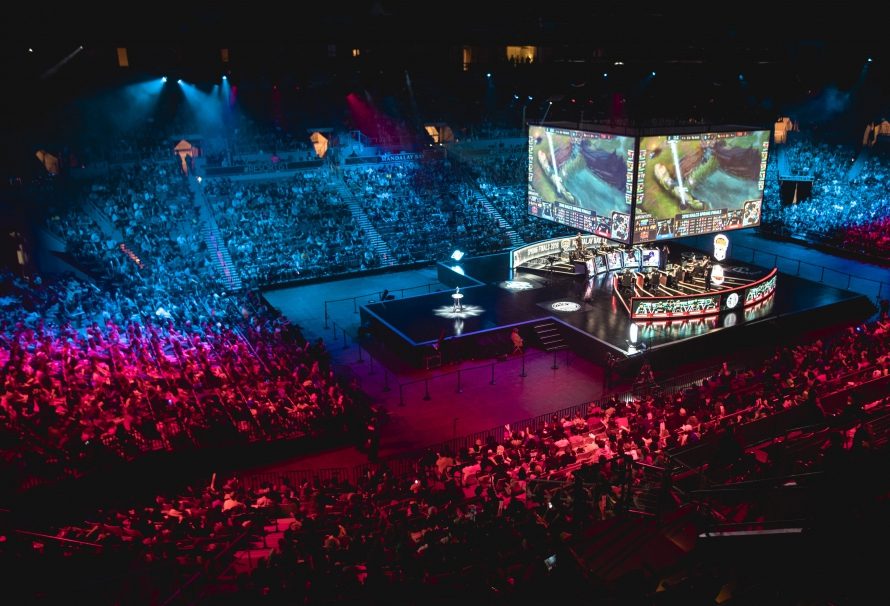 A lot of us play MOBAs here at Green Man Gaming, and vastly different ones as it turns out. I went and asked “Why is that MOBA your favourite?”. If your wanting to try out a different one, have never played one or want to get back into competitive multiplayer battle arenas, then read on and find out why they’re the best.

Looking at pure size of community, company, streamers and esports scene, its hard to say that League of Legends isn’t the best MOBA out there right now. But its not just savvy business practices and being at the right place and the right time that led to their success. League of Legends takes just the right amount of complexity that allows players to practice all day and still be left wanting, but also lets relatively new players still enjoy a few games every now and again.

It takes the traditional DOTA map of 3 lanes, with five characters per team. You can play one of five roles, each vastly different and allows players to feel a bond with others who sympathise with their bespoke troubles and challenges. For example, I play Jungle. This means I spend a lot of time running around in the jungle, earning my XP off of monster camps, and helping lanes to win fights and get kills. I have spent a lot of time dedicated to getting as good as I can be at this one role, and there is enough nuance that I will never know everything. What’s more, Riot are consistently improving the game and changing the rules to make the game more satisfying, and to keep its very large roster of champions relevant.

If you’re going to pick a MOBA to try out then it behooves you to try out the most popular one, as it is definitely so for a reason. Based on your experiences, you can then jump off to find the MOBA that suits you better, if you want more or less complexity. But trust me, you’ll still come back to LoL. We all do.

You would think after 2333 hours of playing this game, I would know what it is I like about Dota 2. The truth is, it’s difficult to pinpoint exactly what I enjoy about the game. No other game I play elicits the same level of satisfaction and at the same time makes me feel utterly useless.

Initially I started playing because I watched the 2014 International Tournament and wanted to better understand what was happening on the screen. This lead me on a long road of trying to get to grips with the intricacies of this game, e.g. denies and pulling. This is one of Dota 2’s greatest strengths. A lot of new mobas are trying to simplify and streamline the experience, whereas Dota 2 doesn’t pander to newer players. You could argue this point as a weakness but I personally find going from completely clueless to some level of understanding very addictive. There is so much depth to Dota 2 and this gives rise to an esport that I still find myself watching even after all my failings in game.

The good news for new players is that the game is easier to get into than ever before. Valve and Icefrog (Lead Developer) continue to make updates and changes that keep complexity but remove needless difficulty, e.g. warding will now show the vision it will provide before it’s placed. There are also an in-game guides that you can select which give players some idea of which items to purchase and skill builds to follow. Unfortunately this system doesn’t replace the hours of practice needed to get a good understanding of certain heroes but there are plenty that new players can be effective with.

The 113 hero-pool is extremely varied and every hero has something unique about them. On top of this you can purchase items that can add new abilities to your hero or enhance existing ones. This is all done on a game by game basis and there is no progression for heroes outside of the game. The only differences you get are cosmetic only, which means everyone is on an equal footing, no matter how long they have been playing. I think this, coupled with the fact that the game is completely Free-to-Play is one of the main reasons to give the game a go. However, be prepared to deal with negative players that should of stopped playing long ago. The game features a mute system to ignore such players so don’t get discouraged, even professional players will make mistakes when playing this game.

I’ve played a lot of MOBAS over the years; Smite is easily the most unique one I have encountered. It’s a 3rd person game, taking a lot of its inspiration from World of Warcraft PvP gameplay. As a long time WoW player, this heavily appealed to me, on top of that, you’re playing as mythological Gods! It features 8 different pantheons, Egyptian, Norse, Hindu, Greek, Roman, Chinese, Mayan, Japanese and the recently added, Celtic. With a large pool of 87 Gods to play from, no doubt you will recognise some of the popular ones, like Zeus, Thor and Loki.

Objectively, it is similar to other MOBAs. There are 3 lanes and a jungle, and a map that veteran LoL players would be able to easily adjust to. Each lane has 2 towers, and a phoenix you need to destroy in order to reach the end goal, the enemy Titan. Kill the Titan, win the game. In the jungle, you will find buffs, bosses, portals and experience camps, all of which add another layer of complexity and strategy to the game. Like most other MOBAs, items play a large role too, meaning every game gives you the option to build a God slightly differently, changing the playstyle of the God and perhaps catching your opponent off guard.

Your average game only takes 20-30 minutes but with 7 different game modes (1 of which being a rotating “Match of the Day” with fun and silly rules) to choose from, there is always something a little different to do incase you are in the mood for a slightly more laid back “anything goes” style of game.

Heroes of the Storm have just updated to their 2.0 version, and now is a excellent time to jump into the game. During its lifespan its cornered a small but hardcore group of players, and might be one of the most easily accessible MOBAs out right now. Blizzard had taken a look at the big players, DOTA and League of Legends, and thought, “Why are these games the same as original DOTA, including all limitations of the day?” They set out to make a MOBA that was streamlined, inviting and focused on what players enjoyed most: the teamfights!

With multiple maps in the game, heroes from multiple games with deep and rich backstories already, HotS offers a lot of variation in games. Different map objectives leads to players focusing on the action, on their team and the enemy. Lanes, minions, merc camps and leveling up come second. Players level up as one team, and the comeback bonuses mean the game can swing at any moment. The objectives are designed to allow teams to make progress and capitalise on their successes, whether its a teamfight win or capturing a Boss camp, that’ll spawn a huge unit to push a lane. Some maps don’t even allow you to push lanes to win, you simply must fight for the objectives.

I prefer Heroes of the Storm because I know what parts of MOBAs that I like best, and I don’t care if it makes the game easier. Its also a boon that when I introduce people to the game, it doesn’t take years for them to learn the mechanics and have a good time.

Atlas Reactor is a bit of a misfit for this list as it’s not a game that follows the established MOBA metagame of lanes and objectives. What it certainly is is a hero-based Multiplayer Online Battle Arena which makes it fit enough. It’s a game with a completely unique formula and the best way to explain it in one sentence would be this: League of Legends blended artfully with X-COM to deliver a turn-based brawler with a twist: everybody plans their turn at the same time and the results are played out for them. It’s a great concept and it really delivers as a fun and competitive game that results in some extremely nuanced play, but without the furious clicking of your normal MOBA.

Heroes are split into Firepower (DPS), Frontliners (tanks) and Supports (uhh…supports). Every character has a set of unique abilities and an ultimate ability. I love this game for a few reasons. Firstly, the characters are really excellent – every one of them is packed with personality and a little comedy. The gameplay is challenging and is all about second-guessing and outwitting your opponents, using your prep moves, dashes and attacks. It’s a little more relaxed than League or DOTA and a match takes only 15-20 minutes. It doesn’t have as steep a learning curve as classic MOBAs but it does have space to excite you with sick plays. It’s F2P like the others (with a paid version also available to unlock all the heroes), so give it a go!

Reports Suggest League of Legends Mobile Game Is In Development

Blizzard removes real-money loot boxes from Heroes of the Storm