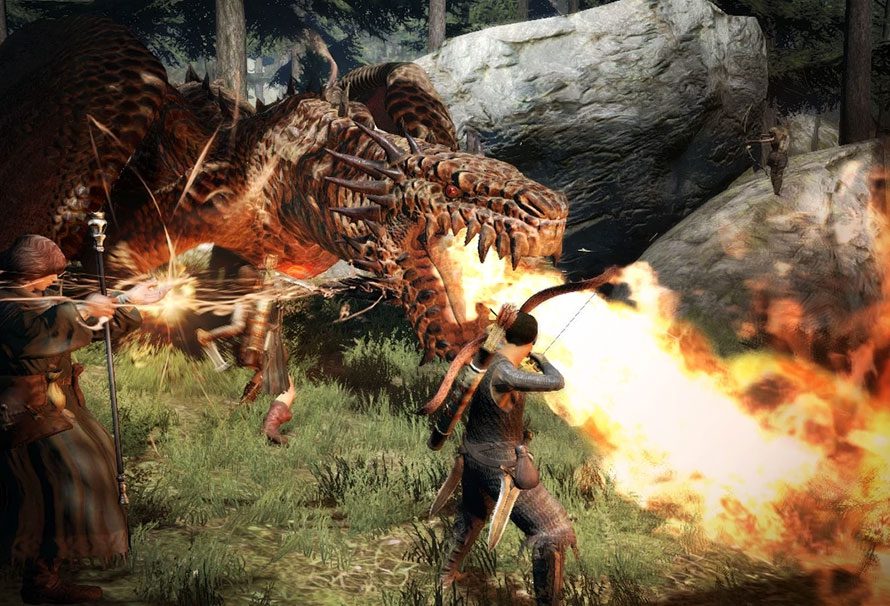 Dragon’s Dogma is the best, and that’s hard fact. You can’t dispute it. Just try.

But Alex, I hear you beg, why is it the best? Well if you’d just shut your pie holes for five seconds, I’ll tell you.

Why Dragon’s Dogma Is The Best

Firstly, it’s not the best. It’s got a lot of flaws but frankly none of them matter, because it’s just so good. If you want an involved storyline and a game where you don’t have to trot over mile after mile of frankly quite similar scenery, then this isn’t for you. THAT SAID none of that matters because the storyline is deep and fascinating, just it’s not doled out to you. The world is absolutely filled with things to SMACK with a combat system that’s frankly amazing.

Gransys is a country under attack by a DRAGON called Grigori. The world’s populated by harpies, cyclopes, wolves, ogres, and goblins. Oh, so many goblins.

If that was all the world was, it’d be a boring world. There’s just so much more going on than it seems at the beginning. Why are creatures suddenly appearing everywhere? Why did the dragon turn up? Why doesn’t the Duke slay the dragon like he did the last one? What’s happened to all the Duke’s previous wives? What’s Salvation? Why won’t other nations help Gransys? Why does the blacksmith only ever tell you that ‘They’re masterworks all, you can’t go wrong’?

What are all the pawns all about?

Rejoice, arisen! You’re not alone in your adventure. Pawns exist to do the bidding and serve the arisen in your quest, and they’re summonable at handy spots around Gransys!

But what are pawns? Why do they look human but aren’t…really…human? Why do they come out of portals in the sky? Why do you get one pawn that you mold into whatever you want, but then you have to summon other pawns from alternate dimensions?

These questions will be answered, in time.

Well they won’t, but some of them might be hinted at, and THAT my friends, is Dragon’s Dogma.

OK so it’s a divisive thing to say, but pawns have a lot of dialogue and without that the game wouldn’t be half as good.

You see as you trot about the world, questing away, they comment on what’s happening, the monsters you fight, and just generally on their status. The frequency of their comments makes them appear like excitable dogs, yapping away at the world. Here’s some of their wonderful babblings:

“Soaked to the bone!”

Getting wet is a status in Dragon’s Dogma, so if your pawn gets wet they’ll let you know which is great! Except they’ll do it after climbing into a fountain, or jumping into a river, or running through a waterfall.

When your pawn sees a large tree.

“’tis even larger up close!”

When the tree is even larger up close

When it is not a troubling foe, but they might’ve stubbed a toe or something.

See? How wonderful is that? They shout these all the time when you’re out and about, and it makes you really feel like your pawns have personality.

Some people turn off the pawn banter. Those people are monsters.

The meat of the game is in the combat, you get to choose between nine classes which go from warrior through rogue to sorceror, and each one is satisfying, fun to play, and has endless potential.

I played my first playthrough as a warrior, meaning I ran around in heavy armour hitting things with a very big hammer. I couldn’t do much in terms of support so I had to take pawns that’d complement my fighting style, as well as making sure my main pawn was suitably set up to help me out. Thwacking things is just so much fun in Dragon’s Dogma so I had a cracking time.

Next playthrough I switched to a Ranger, meaning I had double daggers and a bow, and this was a complete turnaround for me. Instead of having to support, I was now a main damage dealer but I could do so from far away or close up, and I had abilities for getting in/out of combat and whittling foes health away.

I haven’t even touched classes like the Magic Archer, Mage, or Mystic Knight yet.

Dark Arisen is the expansion for the game and you can’t get it on PC without that expansion, and that’s absolutely brilliant because even without adding into the Dark Arisen content on Bitterblack Isle, you get so many ease of life improvements. You can now fast travel whenever you like, whereas before in the original game you had to rely on a finite resource. Of course you can still only teleport to places where Portcrystals are, you wouldn’t want the game to be too easy right?

The island of Bitterblack Isle is where the true challenge of the game lies. It’s definitely meant for high level players, and it throws out the rulebook you’ve spent many hours learning. Combat is now much more brutal, much more cramped, and there’s loads more enemies to fight, be scared of, and eventually learn how to crack.

And that’s all before Death itself turns up and gives you a Bad Time.

Remember when I said the story was deep and fascinating? Well for the most part it’s very light, you only get it through your interactions through the world and frankly you can forget about it for large amounts of time.

But those endings, THOSE ENDINGS. I can’t describe them because it’d be a real spoiler, but the game goes in a direction you just cannot foresee, and when it does it provides such a satisfying end. I’m still thinking about it and I’ve seen it all twice.

So! Those are the reasons why Dragon’s Dogma is THE BEST.

Disagree? Let us know in the comments below or on social media! Agree? GOOD. Let us know too, so we can all be smug together.

Now I’ve got to go and start my third playthrough.