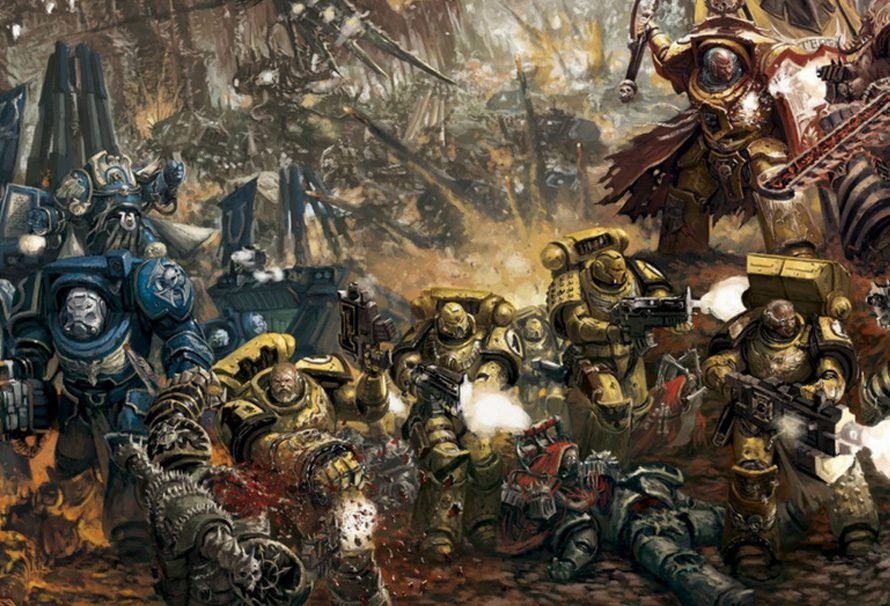 In the grim darkness of the far future of Warhammer 40k there is only endless articles ranking everything and everyone. Top 10 Primarchs, which Chaos God is hottest, which Lasgun has the highest efficiency, and so on.

We at Green Man Gaming don’t believe in ranking things for no reason, we’re here only to rank when ranking is necessary, important, and also will let me write about Warhammer 40k for a few hundred words.

So here’s every faction that’s currently in Warhammer 40k, ranked from worst to best.

If you dispute this highly scientific and objective list, then either you are a heretic of the foulest kind, or you’re a Games Workshop employee. If you’re the former, please let us know on the Community why you think I’m wrong! If you’re the latter, can I have a money off voucher? Thanks.

Note: This list isn’t about who plays best or anything. and is 100% factual and serious.

What do we have instead? Zombie robots.

Ah the ‘how can we make cool mecha a thing’ faction. They’re not terrible, but their focus on ‘the greater good’ doesn’t always fit in the grimdark universe. And maybe that’d be alright if they’d stuck to it; a shining beacon amongst the rest, but over time the T’au have gradually become more grimdarkened, now it’s clear they subjugate lesser races and keep people docile under mind control.

I feel that if they’d kept to their guns we could’ve had something interesting, but they’re slowly becoming ‘just some blue guys’.

Cool mechs though. But could we get rid of the ‘ in T’au please too? Makes them sound like an 80s band, or a Vulcan.

Look they’re good and they try hard, but in the universe of the Imperium these guys are grist for the mill. They’re the delaying tactic until the real warriors turn up, they’re Operation Cannon Fodder. If they didn’t have tanks they’d be nothing.

The fantasy is good, Sharpe vs Daemons, WWI aesthetics vs space aliens, but the reality is just they get mown down. These poor guys are low rated here mainly cos they just deserve a rest!

I don’t hate them, I just feel sorry for them.

This is where we start turning it around, the Adeptus Ministorum have an interesting story to them, because they’re saints and worshippers of the God-Emperor, a divine being that defies his own divinity.

They also lean directly into the grimdarkness of the universe, that special kind of Warhammer 40k grimdark where it’s grim and dark as hell, but they think they’re absolutely right. The Penitent Engine, the Repentia Squads? Good stuff.

A newer addition to the Warhammer 40k universe, Knights are a stepping stone between dreadnoughts and titans. Bringing in a bit of flavour from medieval knights and feudalism, they are single pilot mini-titans, and they’re cool as heck. Seriously, they’re huge but not too huge, and so you just want one right?

I love the alien films as much as everyone else so Tyranids are always welcome. They make a wonderful enemy, faceless, unknowable, a tide from outside the galaxy who only seeks to destroy.

The only problem with them is that this is it, they’re faceless and unknowable…and that’s where their depth begins and ends. Bit two dimensional, our niddy boys.

Ah the original Eldar, still holed up in the Webway, still all fucked up and loving pain. They’re a good counterpoint to the prim, stuck up Eldar, all living in their bone spaceships and fearing death.

If only they didn’t look quite so emo, y’know?

Honestly I do love daemons in Warhammer 40k, I love them very much.

So why aren’t they higher up?

Because for every amazing daemony model, there’s one that isn’t quite so good. And even more than that, I feel that some of the daemon models don’t really ‘feel’ very much like their gods. Bloodletters for example, whilst useful, don’t feel hugely Khorne-y to me.

The Imperium is beset by many enemies, both subtle and overt. The overt threats have armies to deal with them, but for the insidious threats which threaten the stability of humanity the Inquisition is there, blade, book, and bolter in hand.

Probably the best thing about the Adeptus Mechanicus is their models, they mix together body horror, far future mechanical augmentations, and 50s scifi aesthetics.

Maybe it shouldn’t work, but it does, and with absolutely brilliant robots and walkers thrown in too. Who can look at an Onegar Dunecrawler or a Kastelan Robot and not be drawn into worship of the Omnissiah? I know it’s a struggle for me not to!

But they’re just so damn cool. Those sleek lines on their Wraithlords, the Howling Banshees, the Exarchs, Warp Spiders! Every model is alien with a capital A, they’re space elves yes but they’re damned cool space elves.

Space Marines are the main heroes of the Warhammer 40k universe, and for good reason. They’re humans but humans+, they get awesome armour, they get all the plot lines, and they’re diverse enough that you can make your own chapters and histories.

So why aren’t they first?

Similar to my theory about Chaos Space Marines, Harlequins are Eldar…but cool. They’re a specialised smaller force of individual performers and warriors, and it’s that which makes them so unique and interesting in the universe. They flit through society, performing and undergoing missions, and you never really understand what their goals are.

Most special amongst them all is the Solitaire, the figure representing death, something which rightfully terrifies all Eldar given that their souls are eaten by Slaanesh. Solitaire walks the battlefield, a lonely figure, unable to be hit by any mortal weapon until they reach their target and. Execute. Their plan.

They’re beautiful, deadly, and the second best faction in the game.

So who’s best? Who’s the number one?

It’s that, out of all the races and species in the Warhammer Warhammer 40k universe, they’re the only ones that have won. A good day for an Ork is to wake up, and have a fight. A brilliant day is a day in which they have two fights.

So this universe of Warhammer 40k, this grimdark far future, is a future of only war. So the Orks are consistently having the times of their lives. Doesn’t matter if they win or lose, they’re having a great time. They’re along for the ride, and the ride is fun.

That’s what I think, my name’s been Alex, and if you want to disagree or lend your support to this perfect list, hit me up on the Community. Death threats can be addressed to the usual place.