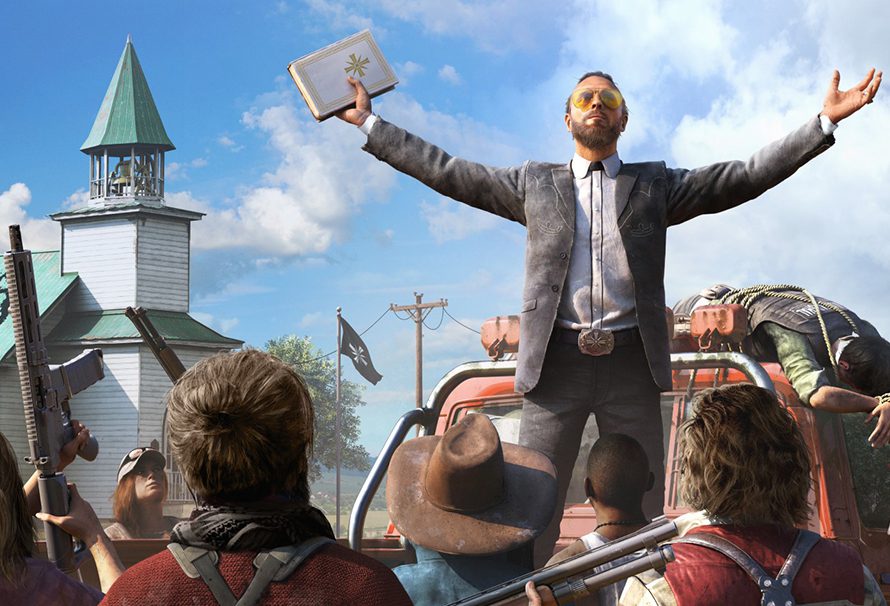 After an influx of information and footage from Ubisoft over the past month or so, Far Cry 5 is looking like a pretty great game. Set in Hope County, Montana, each players role is to take back the region from a fanatical doomsday cult called Eden’s Gate. This cult is led by Joseph Seed who sees himself as a prophet from god and believes he is cleansing Hope County of it’s sins.

Joseph Seed has potential to be the best Far Cry bad guy, but how does he stack up against the other antagonists in the series? Here’s what we think.

The renowned scientist who once worked for the Department of Defence as a geneticist, Krieger is considered a very unethical scientist as his own genetic experiments on primates and humans created a mutant race known as the Trigens who terrorise humanity. If you thought zombies were bad, these guy are worse, think 28 days later on acid. Even though he is pretty unethical, in my opinion he doesn’t really have anything on Joseph Seed or any of the other Far Cry antagonists. True, creating crazed super mutants is pretty bad but you hardly see Krieger for a good 50% of the game.

A notorious arms dealer who sells weapons to many African countries and who has supplied arms for at least 16 wars. The Jackal already trounces Kreiger in my opinion. The Jackal is wanted by the UN for breaking arms laws. The player’s main mission in Far Cry 2 is to assassinate the Jackal and is led on a wild goose chase with the Jackal tormenting them at every turn. With both the Jackal and Jospeh Seed’s moral compasses being completely out of whack, it’s pretty hard to say who could be a better bad guy. Our money is on Joseph however, due to the fact he believes he is a prophet sent from god to cleanse the world by any means possible.

Even though Vaas is technically the secondary antagonist on Far Cry 3, the pirate leader has the most screen time and is the main focus for over half of the game. Vass is an unhinged leader who loves to lure unsuspecting tourists to a desolate island in order to torture them, ransom them and then sell them into slavery. Vaas has no morals, loves to torment the player through the game and at times is just damn right frightening. Joseph Seed is going to have a tough time beating Vaas as the best Far Cry bad guy, he is a fan favourite and is responsible for a lot of Far Cy’s iconic moments.

Once the commander of Rex Power Colt and Lieutenant T.T. “Spider” Brown, Ike Sloan became a Mark V Cyber-Commando and also became the leader of the Omega Force Cyborg army. That introduction alone is probably making you think that Sloan is in a completely different league to Joseph and any of the other Far Cry antagonists. It’s true, he is from the future and from a time line that was born from cult 80’s Sci-fi but he is a force to be reckoned with. Still not selling him to you? Okay I’ll move on.

P.S – Blood Dragon is a great game, just so far from any of the other Far Cry games that it can’t really compare. That’s my opinion anyway.

The monarch of the region of Kyat, Pagen Min was born to a drug lord back in the 60’s. Min took control of the Kartel after his father died and joined the Royalist forces during the Kyat civil war. The Royalists eventually usurped the Kyrat Monarchy with Min killing the heir to the throne and claiming it for himself. Throughout Far Cry 4, it is the players main objective to over-throw Min and restore Kyat to it’s former glory. Even though Pagan Min is a heartless dictator who only looks out for himself he may find it tough to beat Joseph Seed as Seed’s vision is far greater than just becoming the ruler of a region.

Going back to the year 10,000 BC, Far Cry Primal’s man bad guy is Ull the leader of the Udam tribe. The Udam command respect and fear from the other tribes in Far Cry Primal due to their barbaric and cannibalistic nature. Back in 10,000 BC that was as bad as morals went so Ull is pretty bad ass. It’s a shame that brute strength and cannibalism probably won’t beat Joseph Seed’s deluded and frightening nature.

So that’s our thoughts on how Seed will compare to the other Far Cry bad guys, he has the potential to become the best Far Cry antagonist yet. What are your thoughts?

Animated spin-offs in the works for Watch Dogs, Rayman, and Far Cry