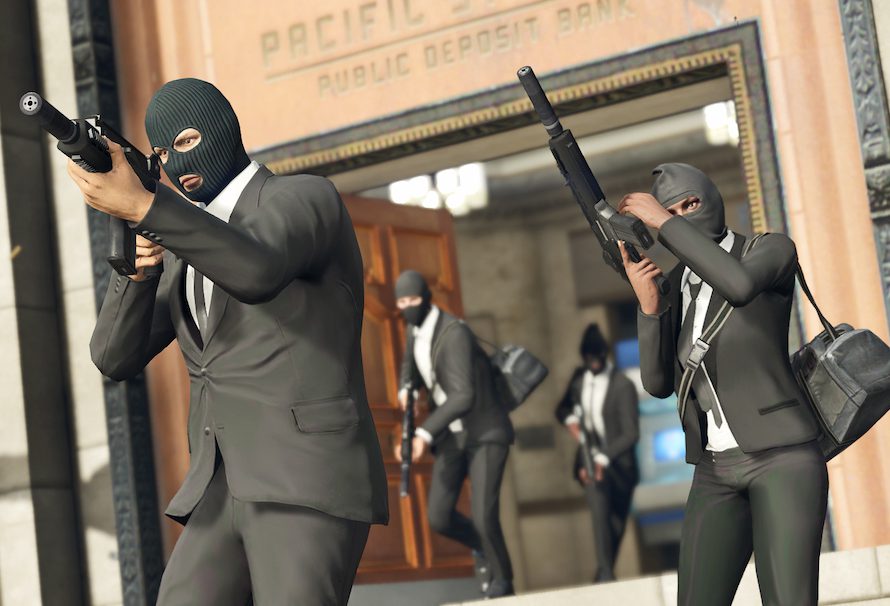 One of the most enduring elements of Grand Theft Auto V’s wildly popular multiplayer partition are the online heists, which players can enjoy with up to four friends. Added back in 2015, some two years after release, they can be credited with rejuvenating the game and turning it into the runaway success it is today. With the announcement of The Cayo Perico Heist, we thought it’d be a good opportunity to round up all of the heists currently available in the game, offering a brief summary of the events and rewards players can expect when they come together to tackle these high risk, high reward challenges. Here’s every heist in Grand Theft Auto Online.

This is the first heist players can start in GTA Online (and here something to help you kickstart your criminal career), for story mode character Lester Crest. With two players rather than four, you’ll have to scope out a bank conveniently located on a motorway, and then procure an armoured car for the getaway drive. You’ll also have to pick a player to act as the Driller, who will unlock the vault and let you access the loot.

This next heist introduces you to Agent 14, who will ask you to save a Russian professor from Bolingbroke Penitentiary. With four setup missions, you’ll have to steal a plane from an airfield, hijack a prison transport bus, cosplay as copper and silence some lawyers, with the party split up across the map. Then you’ll have to commit to the prison break, evading jets to fly Rashkovsky to the safe zone in the plane you recovered.

The Humane Labs Raid is another four-player heist where you have to raid a research lab for a data drive, in a Splinter Cell fashion. The setup involves retrieving keycodes, picking up weaponised Merryweather trucks and stealing a Hydra jump jet with an installed EMP. Then you’ll split into teams, with some infiltrating the lab and the others holding off security and transporting the duo in, before leaving in a Valkyrie gunship.

This heist has five setup missions and involves Trevor, one of the campaign protagonists. You’ll steal coke from frat boys, and various other drugs from areas all over the map. Then you’ll have to defend the shipment from all of the factions you stole from as you take it to the buyer at the El Gordo Lighthouse.

The final heist from the initial update is a big one, as you rob The Pacific Standard Bank in the centre of town. For setup, you’ll need to hijack an armored convoy and steal a set of powerful motorbikes to escape with the dyed dosh. Then the main event has you controlling a crowd of people while your friends hack and blow the vault.

To start The Doomsday Heist, you need to be part of an Organization and own a Facility building. Then you’ll need to retrieve all manner of items across three acts of content, including a Riot Van, a ballistic missile and a ton of marked cash. Only when you’ve completed the lengthy setup will you be able to take on the actual heist, which ends with all players in jetpacks chasing down the villainous Avon.

The Diamond Casino Heist was added to the game at the end of 2019 alongside the casino update. You’ll have to set up an Arcade before you can start it, then you’ll need to scope out the casino, taking pictures of all of its entrances and security cameras, which will provide players with extra information to take on the big score. When you’re ready, you can approach the heist in three alternate ways, Aggressive, Silent & Sneaky or The Big Con, with alternate endings available for all eventualities. Heists can go wrong, but you won’t instantly fail, you’ll be able to adapt in the moment to succeed regardless.

Just announced earlier this month, the Cayo Perico Heist is a brand new score for GTA Online players, that takes them to an entirely new location, a heavily guarded private island. The Cayo Perico Heist is coming on December 15, and for the first time, this heist can be played solo, which is great news for players who don’t have a reliable group of friends for heisting. Instead of an arcade, it looks like you’ll need to pick up a Submarine HQ to continue with it.