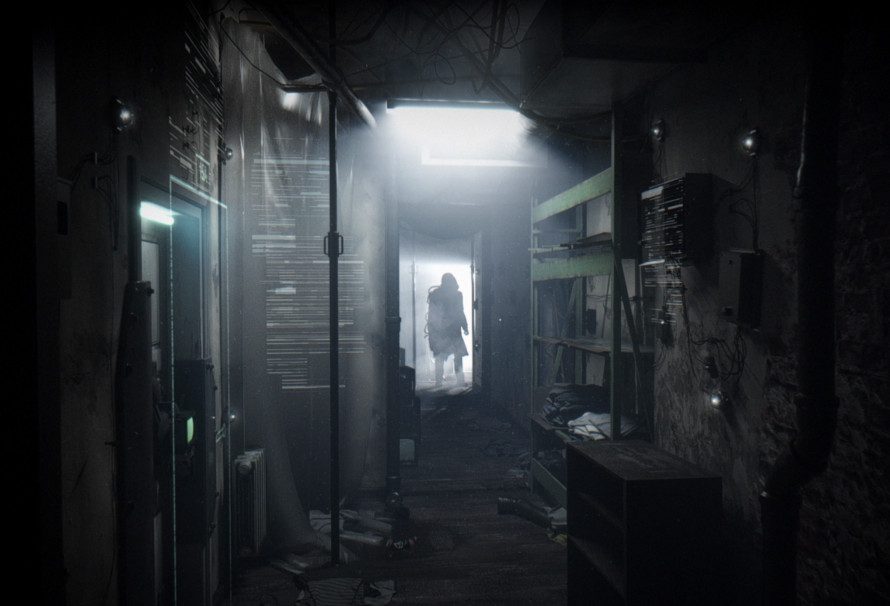 The game begins with the gravelly tones of the familiar voice of Rutger Hauer reading text as it scrolls slowly down the screen. The words are jittering and poetically blunt and it sets us up for the initial scene, but I don’t think it prepares us for the horrors that await in Observer. The cyberpunk horror game is truly a beautiful and chaotic journey into a run down and miserable world that has dissolved from disease and plague. Set in 2084 Krakow, the lines between good and evil are more than blurred, they are overwritten, by the soft gentle voice of the main character Dan Lazarski, a neural police detective known as an Observer who detects and invades suspects minds.

Sitting in a car as the rain trickles down outside, the dazzling neon lights cut through the greying towers and dirty pavements. This is where you learn the game’s controls and you’re introduced to who you are, what you’re doing in this world and how you take on missions in this futuristic hellhole. Your character is beat down by mind-hacking and you have to top up on synchronisation pills which seem to keep you from going off the deep end. When you need to top up, you’ll know it. There will be a dizziness, the feeling of stress and anxiety will surge through you with force and then you’ll be okay, with a little pill. You can pick up these pills as you make your way through the game, so be on the lookout.

Your first mission is a little closer to home as you receive a strange message from your son, Adam. After identifying a caller address, you make your way to the ominous tower of flats. The game does a superb job of thrusting you in and out of intense holographic imagery and into what feels like a normal setting, with crowds of birds chirping in a brick lined courtyard. It’s disorientating, but that’s okay. You enter the apartment block and at the front desk is a half human, half robot man who feels like an immediate threat, but he is helpful, sad, maybe scared himself and it’s our first reminder that not everything in this game will be as it first appears.

As you make your way to Adam’s apartment, it’s difficult not to notice the robot janitor that scuttles down the hallway, with its foul and bolshy attitude. Then, you’re in the courtyard and the front doors are glowing a holographic off-white, surrounding what could be the back streets of a modern day Krakow. Nothing about this extremely polished game actually feels polished, it’s full of grime and grit and disease pulses through the setting like the thin holographic lines that guide the way. Yes, it does have a lot of similarities to Blade Runner, but it’s impending, insidious feel burns into the gameplay and it’s not as easy as Blade Runner, it’s not as clean.

What is clever, is that Observer is a disguised detective game and it’s a mechanic I really didn’t expect. As you enter Adam’s apartment and you’re met with the stench and bloody abomination of a decapitated body, it’s easy to be afraid, but you’re not… yet. Dan knows in his heart, that this body is not his son’s, a paternal instinct that brings him into a new light. This is when I really felt for Dan, he, like the rest of the game, has rough edges that can be heard in the breaks in his voice. The way Dan speaks to people feels genuine, because he is quick to disregard someone’s comments if he feels it is wasting his time.

At the scene you will learn about the two investigative modes; one for mechanics like a ComPass (a device which people must carry to identify them) and the other for forensic evidence, such as blood spatters and in this case, claw marks. There is so much to interact with, that at first it feels slightly overwhelming, but once you’ve moved drawers and searched cupboards, you learn about the game and what you need to look for. Objects will start standing out and the game will prompt you if you can pick up certain items. Once you’ve finished scrounging for clues, the entire building is now on lockdown and you have to find a way out. It’s clever, I love puzzles and they’re easy enough to not distract from the fluidity of the game.

Now you’re out of the apartment, there are a lot of doors to other apartments and it’s at this point I let go a little. You’re able to stroll around and knock on people’s doors, because you are a police officer after all, police officers need answers. There were moments that I wasn’t sure if I should be collecting clues from these people, or simply try to focus on moving onto the next area, but the game won’t baby you – work it out.

Enter the janitor’s room and I’m still relaxed and at ease, I sit down at the computer to find more clues about people living on other floors and there’s a game of With Fire and Sword: Spiders on the computer’s desktop. It’s easy to enjoy the game and forget that you’re in a cyberpunk universe trying to get out after analysing a decapitated body. After a few games, I get up to leave and I turn. I scream.

There was a point in this game, that I became comfortable with the distortion between the blood smeared on the brickwork, the blood pooling at my feet and the sheer amount of excrement seeping from the dirty cracks in the walls. It washed over me, because the vivid colours and bright lights were a constant reminder of a cracked reality. But that will never deter that this is a horror game and when you proceed to the next part of the game, you will be constantly reminded; this is a horror game. As you stab your transmitter into a guy’s neck and live out his bloody demise through the barking scraps of shadowy delusions, this is a horror game. As you run between tight corridors and are pulled between the industrial pipes in the apartment and familiar furniture, compared to the breaks of sinister imagery flickering between your mind. This is a horror game. A bloody good one.