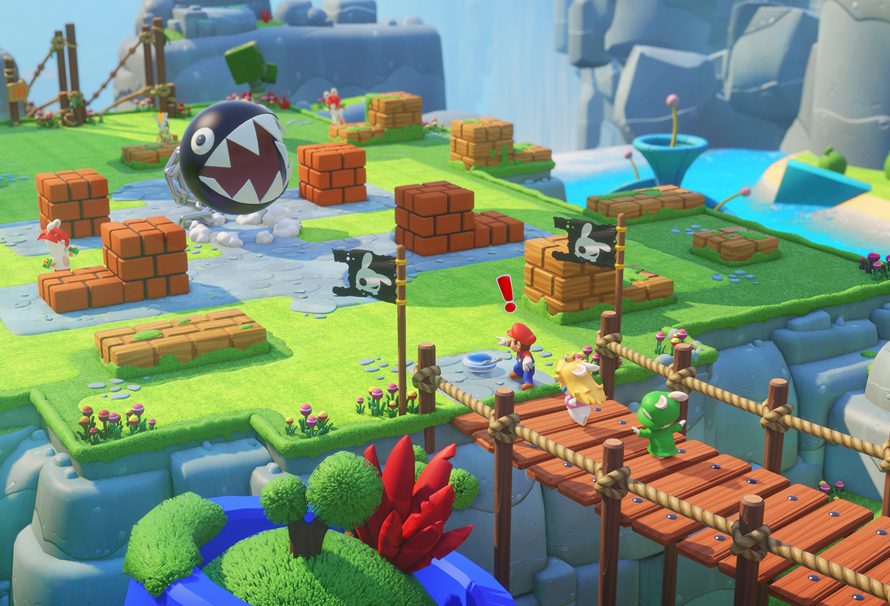 As tactical RPGs go, XCOM is heralded as one of the best. With the release of XCOM 2: War Of The Chosen on the 29th August, players will have the opportunity to expand the XCOM 2 universe and dive straight into a new story.

So once you have sunk as many hours as you can into War Of The Chosen and have practically bled it dry of content, where do you turn? Mario + Rabbids Kingdom Battle just might be the game that will scratch that XCOM itch, and here’s why.

What Is Mario + Rabbids Kingdom Battle?

Announced at E3, this year on the surface Kingdom Battle looks like another crazy crossover of the Super Mario and Raving Rabbids franchises. However, after seeing the game at E3, this title is far more than just your average crossover.

Mario + Rabbids Kingdom Battle throws the Raving Rabbids into Mario’s world. Some of the Rabbids have gone rogue and have been wreaking havoc within the Mushroom Kingdom. It’s up to Mario, his friends and a select few Rabbids to help save the kingdom from this bunny-pocolypse.

As to how deep the story goes, we will have to wait until the game comes out, but the major selling point of this game is the gameplay. In short, Kingdom Battle plays like an XCOM game, you have a team of characters with various speciality skills. Your team takes to the battlefield where players have to use turn based tactics in order to vanquish the enemy.

The similarities between Kingdom Battle and XCOM are near enough endless, with a lot of people who have played the game saying that Mario + Rabbids is an XCOM clone. So it’s safe to say that this is the perfect game to jump into straight after War Of The Chosen. Here are some of the core similarities:

Players are able to choose their characters before they go onto the battlefield. Characters have their own class. For example in Mario + Rabbids Kingdom Battle, Luigi is a Sniper Class whilst Rabbid Mario is a Brawler. Each class has it’s own set of skills and it is up to players to mix and match their characters to accommodate their playstyle.

Characters are also able to level up, and can also equip a variety of different weapons which can be unlocked by completing missions or purchasing them with in game currency.

Both games have an isometric view where players take turns to navigate the level and attack their enemies. Players control character one at a time and are able to use other team members to help them reach difficult places around the level. Players also have to take cover into consideration as leaving your team out in the open is detrimental

One of possibly many abilities that both games will share. Kingdom Battle and XCOM both have an Overwatch ability. Once activated if anyone on the opposing team moves into your line of sight during their turn, your team member will automatically attack them. It’s a pretty neat move that can turn the tide of battle quite easily.

That is just some of the similarities both games have, which just goes to show that XCOM players would be quite at home with Mario + Rabbids Kingdom Battle.

What Can Mario + Rabbids Kingdom Battle Bring To The Genre?

When it comes to tactical RPGs XCOM has a dark and gritty Sci-Fi theme, which makes players truly feel that they are fighting to save humanity and the world. Mario + Rabbids is pretty much the polar opposite with its bright happy colours, Rabbids that scream for no apparent reason at all, and generally a storyline that makes little sense. This could be a turnoff for some XCOM fans but it is great to see that the tactical RPG genre can take on a new skin and appeal to the Mario and Rabbids fans out there as well.

Mario + Rabbids Kingdom Battle also has a co-op multiplayer feature which XCOM doesn’t have. So players are able to team up with a friend and control two characters each in order to complete objectives and defeat enemies.

If you find yourself at a loss when you complete XCOM 2: War Of The Chosen, give Mario + Rabbids Kingdom Battle a shot. True you won’t be saving the world against aliens but you will be getting a solid tactical RPG that has learnt from the best.