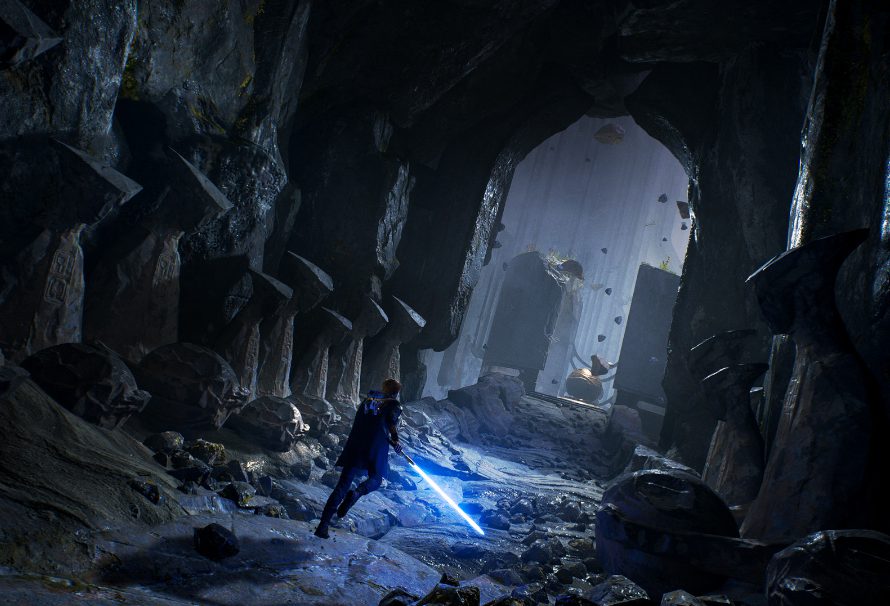 The brief opening cutscene will lead you straight into controlling hero Cal as he traverses the visual feast that is the shipbreaking yards of Bracca. That’s right: no opening crawl here!

This mission will teach you how to play Jedi: Fallen Order, introducing the environmental traversal actions in the game, including traditional platforming, wall-climbing, rope-swinging, and lots of sliding.

Follow the on-screen prompts when they appear as part of the excellent in-game tutorial. The trickiest part about this section is picking out environmental cues. If you get lost, always look for signs of dirt or weathering, which will indicate climbable ledges and surfaces.

This game is packed with visual detail and is gorgeous to look at, so don’t forget to be mindful of your surroundings as you move through the level.

This first sequence will end on an Uncharted-esque butt-sliding setpiece, leading you into the main attraction: Jedi stuff!

In this next sequence, you’ll learn the Jedi tricks of the trade. Cal is soon compelled into using his hidden Jedi powers, and this leads straight into another dynamic setpiece as you fend off stormtroopers on a moving train.

Again, pay attention to the on-screen instructions and make full use of your arsenal. Hold block to deflect blaster fire, but also try blocking at the last second to send blaster bolts back to their owners. Parrying is a vital skill, so use these low-threat punching bags to get your timing right. Keep an eye on your stamina. If you run out, you won’t be able to block.

This section also introduces the Dead Space-esque slowdown power, which you’ll use to slow dangerous environmental elements, opening up new paths to progress. You can spot these features by their vague blue aura.

A brief boss fight here will introduce you to the importance of dodging and parrying in more dangerous scenarios. Red attacks are unblockable, so keep that in mind for future boss fights if you want to survive.

After you’ve wrapped up Bracca, the game opens up. You’re introduced to the Dark Souls-inspired level design on the planet Bogano, with open areas ripe for exploration. But Dark Souls was never generous enough to give you a 3D holographic map complete with exploration markers, so make the most of it here.

Don’t rush your objective, but take your time to explore. Listen to what your droid is telling you to help find hidden treasures like Force Echoes.

You’ll encounter your first meditation point here, as well. These play the role of the Dark Souls bonfires. You can level up here, but be aware that resting will respawn nearby enemies.

Star Wars Jedi: Fallen Order is now available on Green Man Gaming, and if you’re still not convinced you can head over to the Green Man Gaming community site to see what other gamers have to say about it.