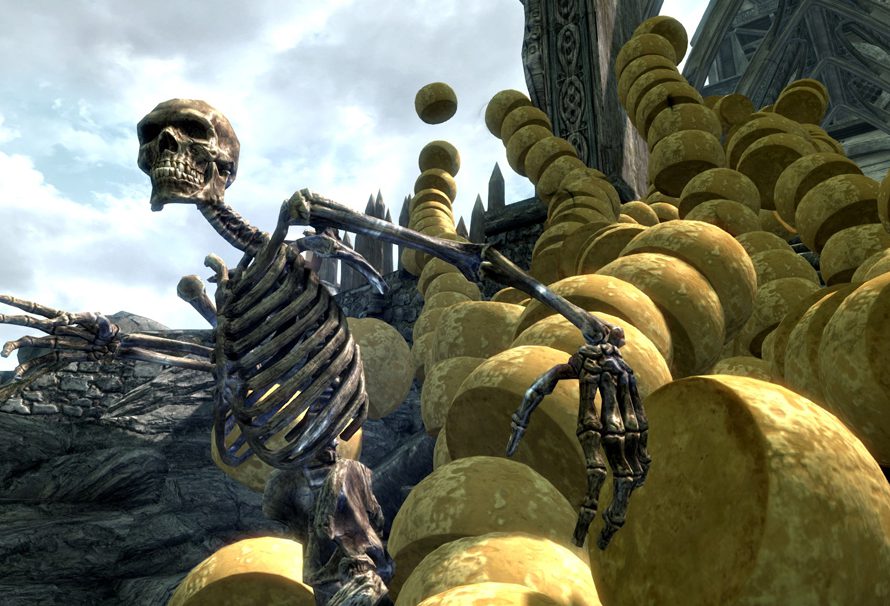 Skyrim…the game that will transcend history. After its humble release just under nine years ago, people are still venturing through the northernmost region of Tamriel to this day. Myself being one of them and—like any adventurer traversing the landscape of Skyrim—there is one thing that unites all of us…cheese!

The fame of the valued cheese wheel is unparalleled within the community. Even Sheogorath, the mad prince himself, proclaims the illustrious grandeur of cheese wheels wherever he goes. So, what really is the secret to this cheese’s history? What makes players want to spawn them until the game crashes? What is the source of the resplendent allure behind the radiating golden light?

We may never uncover the truth, nonetheless, I had a challenge of my own making to fulfill. Is it possible to carry a cheese wheel across the lands of Skyrim without taking damage? The rules were simple, I have to start at Riften and make my way to the great city of Solitude. I need to carry the cheese by hand and I am only allowed three saves throughout my journey. If I intake damage at any point, I have to start over from my most recent save. I am allowed one companion to undertake the quest with me and, finally, the cheese cannot touch the ground throughout the journey otherwise it’s a reset.

My proposed route is as shown above. Riften is in the bottom right of the map whereas Solitude is located at the green cross. My strategy was to take an off-road path at the start until I made it to my second save point; afterwards, I would stick to the main path towards Whiterun then cut across to Solitude passing through Morthal. With the plan set, I was off. My companion Serana was visibly confused as I started escorting the cheese wheel down the path. Unfortunately some changes to the rules had to be made. After carrying the cheese wheel for a short period of time it disappeared from existence. I reloaded the save only to be met with the same fate a little later. In order to be able to carry it by hand, every thirty seconds I have to put it back into my inventory then remove it and start carrying it again. With that oversight rectified, I began my odyssey once again.

After only taking a few steps onto the off trail path, I encountered my first problem; a bear. The cheese appeared to be a very enticing meal for it as it reared up and made its overwhelming presence known; I circled its perimeter like a mudcrab trying to avoid eye contact and moved past it. The bucolic golden grasses near Riften paved the way towards my second save point.

The way ahead was laborious to say the least, mainly because of the circling dragon overhead which was elegantly dancing through the air, scything it in two. I picked up the pace, making sure not to swing the camera wildly and drop the cheese. In my line of sight, the lurking flesh of a troll was moving towards me, in an act of desperation I weaved my way through the trees trying to avoid its gangly arm swipes. Then—the unthinkable happened—a wolf scurried out of the bushes and damaged me. With that, my first attempt came to an end, the cheese’s beauty was no more; I reloaded the save and started over.

Making my way back to where I was before. Trudging onwards, I submerged into the mud beneath my feet and eventually made it onto the cobblestone path of civilisation. I walked forwards and found myself at the foot of the alluring ‘Nilheim Tower’, soon to be my second save point. I saved with purpose.

The view from the bridge of Nilheim was breathtaking, trees lined the ravine of craggy rocks as waterfalls clutched to the laden slopes. A signpost pinpointed the way towards Solitude, I followed the hill downwards as I saw a wolf on the side of the path. Serana dispatched of the wolf with a malevolent ice spike sending it spiralling over the cliff. Feeling pity for the plummeting animal; I pushed onwards, the cheese was destined to reach the city of Solitude. Reaching the bottom of the hill I was embraced by the greener pastures of Skyrim. The journey may have been about the precious Cheese Wheel, but a sense of serenity was found within me while walking through the myriad of beautiful vistas.

Reaching the bottom of the mountain I continued along the path following the flowing river besides me. Within seconds, the sun’s embrace on my character’s skin was blotched out by an overshadowing polished darkness of mist. The clouds transfixed me as they wrapped around the mountainsides; bringing rain forth onto the lands.

I had now reached the halfway point of my journey, I scurried past the bandit-infested tower, staying out of sight as I moved onwards towards the city of Whiterun. A reverberating expanse embraced me as I bypassed the tower and the mist parted bringing rays of light onto the cheese. The city was a landmark of glorious hope as I ended up having to run from approaching frostbite spiders to make my third and final save at the stables of Whiterun.

After Whiterun, I made my way towards the colossal mountains. The skies were an arresting orange tinge, signifying the dying sun of the day. A wheelbarrow was randomly flipped over on the side of the road with cabbages, jealous of the cheese, they started rolling down the hill and somehow caused damage to my character. With that, I reloaded my save and made it back to where I was.

A dragon could be seen ahead, my final obstacle before the city, I ran through the hills with accelerating speed to protect the cheese.

I ran for what seemed like an eternity, threading the trees while Serana was trying to kill the dragon with ice spikes: a futile exercise against a frost dragon. The slopes were neatly laid with snow as I reached the town of Morthal. I was taken aback by the view that graced me, lights danced through the sky with colours of ecstatic splendor as they led my way through the Supernal glowing marsh between Morthal and Solitude. Chaurus’s had chased me for a while then crawled back to their dank homes. The city docks were now waiting with open arms to welcome my piece of cheese.

I had finally made it, the great city of Solitude stood tall before me, banners of pristine red waved to me pleasantly in the midnight hour. Entering through the gate I brought the famed cheese wheel into the city square, passer-bys looked towards its gaze and quickly averted their eyes. I walked into the ‘Winking Skeever’ inn, placing the cheese wheel on a nearby table for others to enjoy. My journey was complete. My task…fulfilled. I felt a deep sense of pride within my heart.