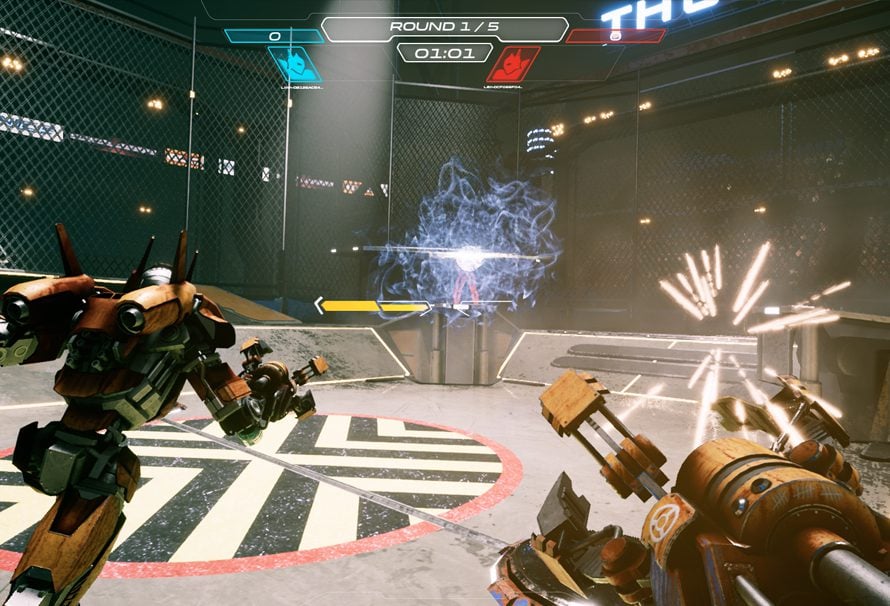 This week we got the opportunity to play Jackhammer, a new game from Green Man Gaming Publishing and brand new game studio Mission CTRL. In a nutshell Jackhammer is a cross breed of Unreal Tournament, Dodgeball and Robot Wars. If you are into your fast paced adrenaline fuelled arena shooters then Jackhammer is the game for you, here’s why.

Let’s set the scene, you are a humanoid robot who’s one purpose in life is simple. Destroy the apposing team only with the the dodgeballs provided in order to win. Sounds simple enough but once you realise there is only a finite amount of dodgeballs scattered around each arena and a plethora of hazards to get in your way, you will soon become reliant on you lightening fast reactions and the failure of your opponents.

The team based game is designed for a maximum of six players. The two teams of three are thrown into an arena where they fight to the death. Matches are played across a variety of arenas from conventional Robot wars-esque caged arenas to lava spewing foundries. The demo we played was pre-alpha but the game once released on Early Access will have more game modes to choose from, giving this game the potential to rival other arena based shooters such as Quake Champions and Unreal Tournament.

Your only weapon in the game, your Jackhammer is a gravity based device that lets the player retrieve and shoot the various dodgeballs scattered around the arena. The Jackhammer allows you to draw in and collect dodgeballs and has to be charged up before it can be used to shoot your enemies. With the addition of charging up shots this adds another layer of skill to the game as you have to consider your Jackhammers charge before shooting.

Players will get the opportunity to customise their own Robot in Jackhammer. Once fully developed players will be able to swap out different arms, leg and head armour to make their machine truly unique. With so many customisable parts for your robot planned for the game, players can really make their robot unique. SO if you fancy making a humanoid version of Sir Killalot then Jackhammer is the perfect for you.

From our hands on time with the Jackhammer Pre-Alpha, we are confident that this game is going to be pretty epic. You never know, by the time it is out of Early Access Jackhammer could be doing the rounds on the eSports circuit.

Destiny 2 Gets New DLC and Console Enhancements on December 5