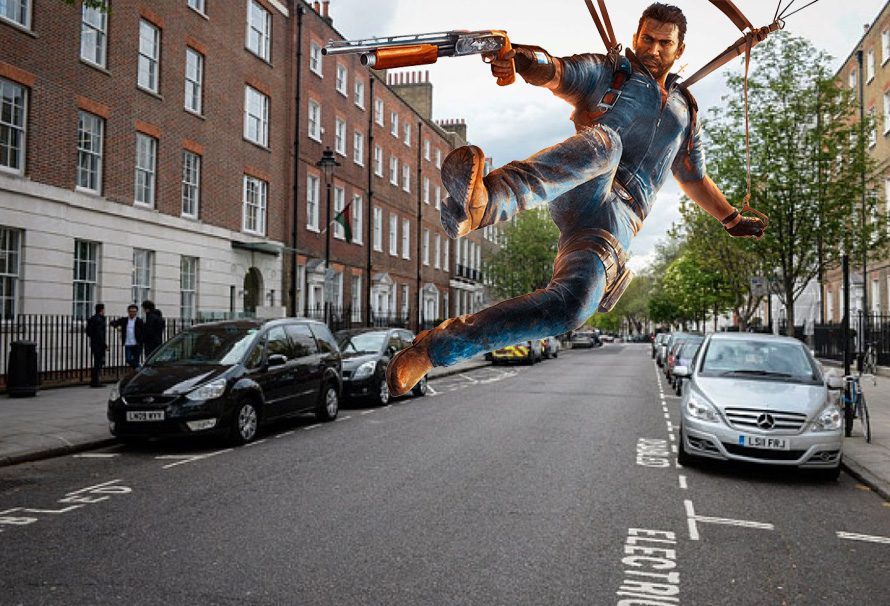 Rico’s back and this time he’s brought weather. Just Cause 4 is out very soon and Rico’ll be off to the expansive climes of Solis. As always, he’s there to right wrongs, save everyone from evil regimes, and blow up a lot of stuff.

So far he’s been to San Esperito, Panau, Medici, and finally Solis. All places with their basis in reality, but very obviously not real places.

Maybe it’s time for that to change. Maybe Rico Rodriguez needs to take on real life issues. Maybe it’s time to put away the grappling hook and get real.

Here’s my ideas about what important issues Rico can tackle next.

Rico brings his trademark scorpion action to the classroom as he grapples with the problems of childhood illiteracy. Instead of bringing chaos to the streets, play as Rico as he stops chaos in the school. Will the forces of illiteracy prevail, or will he parachute smarts into young brains? Find out in Just Cause 5: Books Bring Brains.

Real life has a bit of a racism problem. Thankfully Rico Rodriguez is going to fix it for us. He takes to the streets in the 6th Just Cause game to tackle white power groups and the resurgence of (who would’ve believed it) nazis. Press X to debate in this thrilling Just Cause sequel.

Whilst the rich are getting richer, the poor aren’t. The gap between rich and poor is getting wider each day, but that’s until Rico turns up on the scene. Armed with the gun of unionising and the grappling hook of making the rich pay taxes, he’s going to fix it for all of us.

The world is getting faster. People are working harder. Stress is just a part of life. Even Rico Rodriguez suffers from this, after many adventures in many places he’s in dire need of a rest. He’s not sleeping. He’s not eating right. He’s irritable. This slower adventure sees him take some ‘me’ time, something he’s desperately in need of. That’ll recharge his batteries. You do you, Rico.

Wow, we can’t wait to see these hard hitting, relatable, adventures. But you don’t have to wait, Just Cause 4 is out on the 4th of December and you can pre-purchase it today.