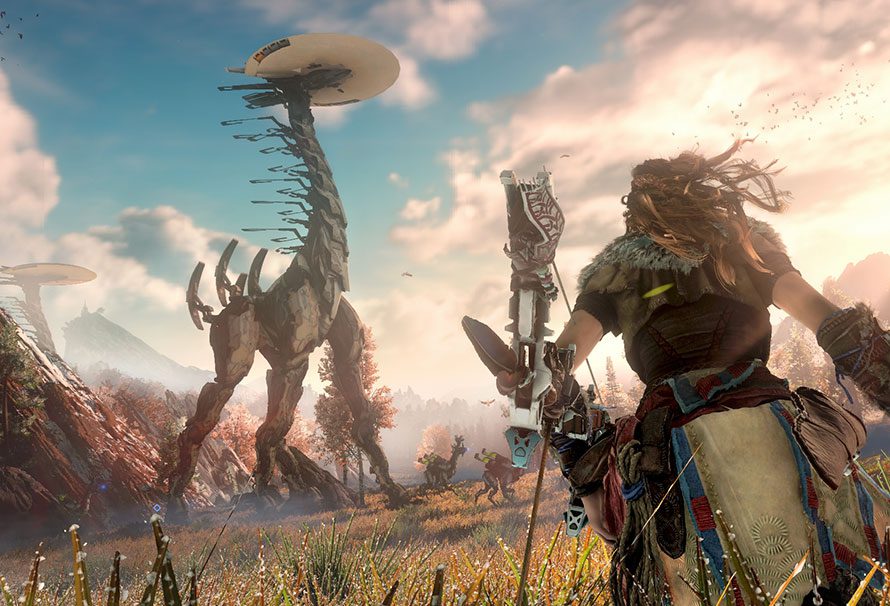 Horizon Zero Dawn is a brand new IP from Kill Zone developers Guerrilla Games. It is one of 2017’s most highly anticipated PlayStation exclusives which throws the player into a post apocalyptic world dominated by machines. With that in mind here is all we know about Horizon Zero Dawn.

What is Horizon Zero Dawn?

In a nut shell Horizon Zero Dawn is a post apocalyptic action role playing game where the earth has been taken over by robotic creatures. You play as Aloy, a young human hunter who is given the task of uncovering what happened to the world and why it is now dominated by machines.

Even though not much of the game’s story has been revealed, we can confirm that Horizon Zero Dawn is set 1,000 years in the future where humanity has abandoned the world as planet earth has been overwhelmed by robotic creatures. Aloy is a member of one of one of humanities few indigenous tribes and she must hunt mechanical wildlife in order to survive.

On the surface, Horizon Zero Dawn is an open world action RPG. Much like games such as FarCry and Final Fantasy XV players are free to explore the vast open world completing main story missions and side quests. The game also combines third-person shooting, diverse exploration and stealth elements. The game also borrows gameplay elements from the likes of Uncharted and Tomb Raider.

Crafting will play a big part in this game. Hunting down machines will be key as you will be able to upgrade your weaponry with all sorts of parts harvested from fallen machines. You will also be able to create brand new weaponry and tech from your fallen enemies.

Aloy will also be able to use traps, bows, explosives and many more and the more you explore the more your arsenal will grow and evolve.

As well as taking down Machines, Aloy will be able to hack them to make them into vehicles to help her navigate across the game world. Machines can also be used as travelling buddies which will aid you in combat. Not all machines will be able to be hacked however as there is infection spreading across all mechanical wildlife which turns even the most docile machine hostile.

The world in Horizon Zero Dawn will feature realistic weather patterns and day-night cycles. The map itself will also feature dilapidated cities, new human settlements and plenty of foliage and fawner. The environments can also be used in conjunction with the games steal mechanics such as using foliage to hide.

Horizon Zero Dawn is due for release on the 28th of February 2017 exclusively for PlayStation 4.