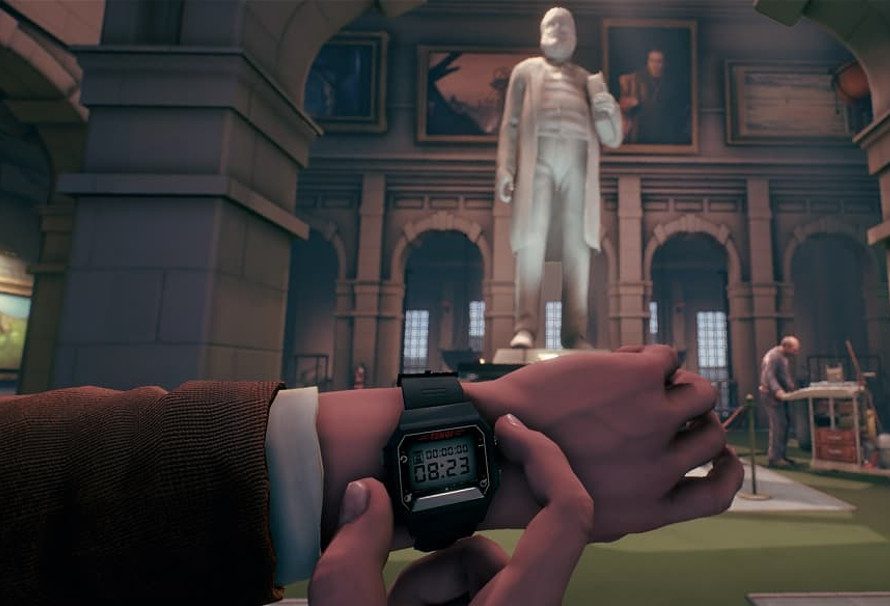 You open your eyes, a desk is before you and soft jazz plays out of a nearby record player. Standing up, there is a buzz at your pager. ‘Check your post’. A knock at the door and a package slides under it, resting within your reach. Opening the package reveals a 3.5inch floppy disk which you slide into your computer, a distinctive 1980s DOS Shell inspired beast with a particularly British computing sounding name.

Welcome to The Occupation, it’s Manchester, it’s 1987, and the country is not happy.

Set in a fictional version of Britain’s past, fascism is on the rise in the 1980s. After an explosion which leaves 23 dead, The Union Act is proposed which will severely limit civil liberties, especially those belonging to immigrants. As a journalist who’s let into the governmental building where this’ll be enacted, it’s up to you how this will play out. Will you let it go ahead, or will you make changes?

The Occupation is an immersive sim without any combat at all, where you’re let loose in a government building and events unfold around you in real time. If you take a minute to read something, a minute will pass in the game. The NPCs that make up the staff in the building all have their own wants, agendas, needs, and drives, meaning they’ll appear at different locations according to their own timetables. The whole building takes on the feeling of a vast clockwork contraption, with people moving to their own dance throughout it, and you as the catalyst moving through the building.

Starting the game you’re let into the building and have to get your briefcase scanned by a friendly, but a little inept, receptionist. I took great pleasure on smashing the buzzer I used to call him, enjoying his rising fury until he disconnected it. It was only later, discussing this with the White Paper team, that I learned that little things like this can have larger consequences.

How NPCs feel about you will influence their interactions with you, they may feel less kindly if you’re annoying, meaning if they catch you in a part of the bureaucratic office you’re not meant to be in, they’ll be much less forgiving. Similarly, if they like you, they may let you get away with things.

This even goes further than this, I mentioned above their schedules and routines, but these can be altered through your interactions with the world and the NPCs in it. Someone may get cross and need to take a time out, taking a furious walk away from you. Someone may need the toilet if they drink too much water, someone may be sleepy if they haven’t had their coffee. It’s up to you to see these connections and alter their behaviours to help you to your goals.

What are your goals though? The Union Act is coming, and what you leak and don’t leak as you investigate the building, the decisions you make about what information you let out determine how the story will play out.

Think of it like you’re part of a grand narrative, like an actor in a play. Will you play your part as a journalist and just attend your meetings, or will you follow the pager, follow the words coming through your earpiece, and get the word out to those who can change things?

If I had to sum up The Occupation’s play in a single word, it’d be ‘diegetic’. Everything’s in the world, from sounds to music to your UI. You’re not watching stealth monitors, you’re not staring at your healthbar, you’re not following an arrow telling you which way to go through the labyrinthine 1980s fascist edifice, you’re hunting and thinking and remembering everything yourself.

The time is told by your watch, the pager gives you instructions, a Whitworth Device which looks just like a Walkman gives you some audio hints, your briefcase contains your documents and items you can rifle through at any point.

The only thing that’s not in the world is the room you awaken in during the tutorial, you can retreat there at any time to read, to examine objects, to use the computer, to listen to the frankly astounding music the White Paper team has written for the game. The only warning is this; time still passes. Those minutes listening to hot jazz? Time’s continuing outside your room.

The only concerns I have at this point are related to the controls, it’s a little unintuitive right now. You grab hold of items in the real world to manipulate them, like a desk drawer or a package. It feels like it should work via mouse control, but right now you have to press WSAD and hold the mouse to move things. Just a little thing, but it’s inconsistently applied and a little clunky. That said, White Paper did say they would change this up before release.

If that can be fixed, then this game has bundles of promise. And since this isn’t a political blog I haven’t mentioned the parallels between it and the real world (whistleblowers? Rising fascism? Anyone?) but let’s just say that it’s themes ring a bell right now, and every day this game gets more bell ringy.

The Occupation is coming to PC, we do not have a release date at this time.