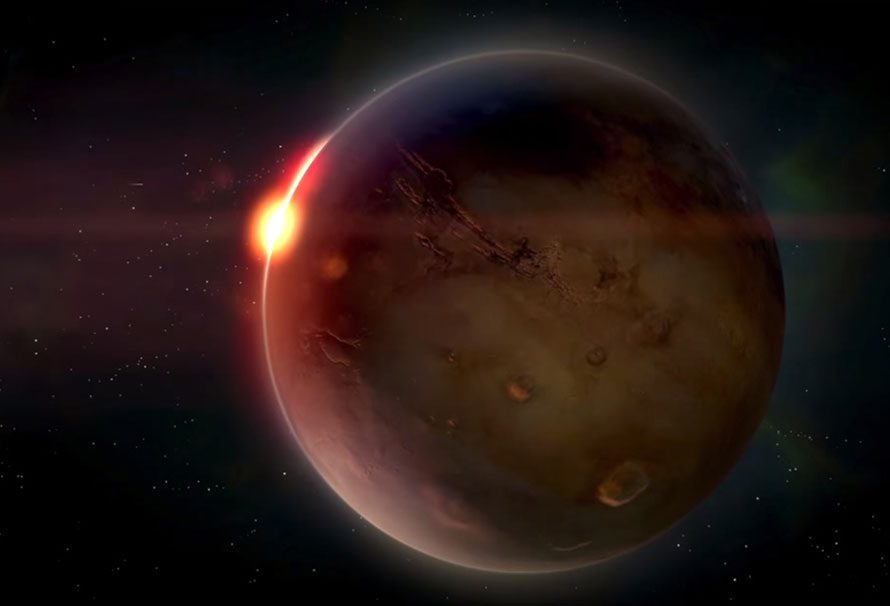 Offworld Trading Company, much like life, is about glorious capitalism. But this time, unlike life, it’s in space. On Mars to be specific, a red planet. Planet of Barsoom and Tripods, and now planet of MAKING SO MUCH MONEY!

In Offworld Trading Company, you run a corporation and your goal is to buy a majority stake in every other corporation. How do you do that? Supply and demand my friend! Produce, trader, undercut, stave the market, saturate it to fox an enemy. It’s all in the numbers baby!

It’s a capitalist game in a capitalist universe and as Conan the Accountant says: the best things in life are to call your debts in, see your enemies bankrupted, and hear the lamentation of their bank managers.

Some might say that eking out a living in space with the same kind of society we currently have is a grim look at the future, but others might say that capitalism works well for us and provides an enormous amount of personal freedom, so why not take it into space?

Well there’s lots of examples for BOTH points of view, so let’s start an argument about SPACE CAPITALISM!

Let’s start with the big one, in Star Trek’s Federation they’ve got rid of money and everyone works to their own ability and for the betterment of themselves and the Federation as a whole. Does this mean that their society is perfect? Well, maybe, but as DS9 shows the problem when you have an almost utopian society is when it interacts with less ‘perfect’ societies. Enter the Ferengi! A rabidly capitalist society who are often used on the programme to show the foolishness of capitalism.

But then they raise the very valid point, alright they are seen as ‘backward’ by the Federation, but they’ve never had a war, never practiced genocide. Who is anyone to judge the Ferengi and their capitalist ways?

Space is big, really really big. And you’re tiny, so very small. It simulates the vastness of an uncaring universe, and as such there’s little to no guidelines about what you morally should do, everything is in player hands! The economy takes ‘free market’ to a whole new level, letting you trade your way to the top, or if you want you can cheat your way there. But caveat emptor! If you’re caught, other players won’t take so kindly to you, and you might see your spaceship go down in flames.

It means that, for the most part and outside of pirate actions there’s a kind of pax ro-EVE-a throughout the galaxy. Financial freedom can breed peace, who knew!

On the dark side of capitalism is that of the Spacing Guild in Dune. They have a stranglehold on the known universe, as the only means of travelling in between the stars is through them and they need the mystical drug known as Spice in order to operate. So they set up an ultra-corrupt system to ensure their stranglehold on the universe remains total. Unrestrained capitalism has meant that the corrupt have risen to the top of society, and they’ll use any method to ensure that they stay there, including genocide.

TWO planets! But maybe that’ll be a sequel.

Maybe the logical end to capitalism, you need a resource so you want to pay nothing to get said resource. Enter the Goa’uld with their penchant for slavery, enslaving basically a whole race and galaxy to mine things and fetch and carry might be said, by some, to be the logical end to a system which values the product over the producer. But no worries, here comes the brave, socialist Tau’ri to overthrow the oppressors and seize the means of production!

Similar to EVE but a whole heck nicer, Elite: Dangerous again takes place in a vast uncaring universe, but it’s just a bit nicer about it. Instead of being in ultra-huge corporations you tend to be cast in the role of the self employed, maybe a small businessperson. It lets you carve out your niche in the galaxy your way, you can build your income stream however you want. This freedom of expression is at the heart of space capitalism, letting you decide your own fate however you choose.

If you thought the Federation was utopian then you’ve seen nothing, The Culture is utopia-extreme. Combining post scarcity society with freedom of choice and expression, you can basically do anything you like (with some restrictions, don’t go murdering, please) and society will bend and flex around you to allow you to do it. It’s no surprise, as the late great Iain M. Banks was one of the great socialist thinkers, and his politics runs deep through every word that he put down.

Think of it as a proto-micro-Offworld Trading Company, you take control of an asteroid and mine the absolute heck out of it. You’ve also gotta protect your investment and build it up, and work against and alongside competitors who want to do the same. Again it emphasises free will, you can be honourable, you can raid your opponents, you can build alliances. It lets you do all of them while building your company your way. Without space capitalism, would you have this freedom?

So there we have it! The arguments for, and against, space capitalism. What do we think?

Well it could be either to be honest, it’s too complicated a question for the likes of me!

Do you have any strong thoughts? Let us know in the comments below, or on social media!