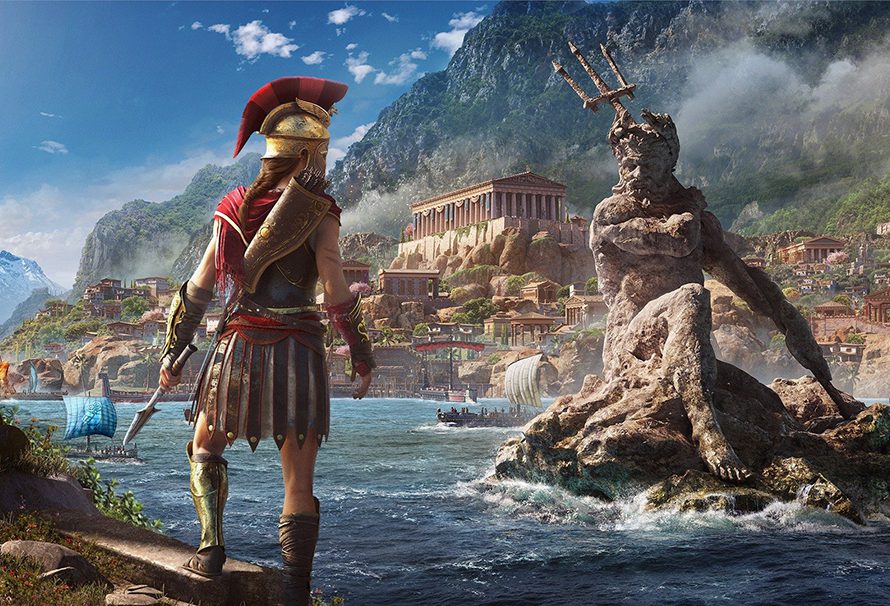 Assassin’s Creed Origins will be released this October after an unusual 2 year hiatus for the series, and is set to take full advantage of 4K visuals, as well as revamped combat and a setting that takes us right back to the origins of the order of assassins we so know and love. But what if you missed out on a game, or stopped playing after AC3 (we know you did) and now you need to know what you missed? Well, let me tell you what happened previously on Assassin’s Creed.

Genesis. This is where it all began, in the city of Jerusalem. Set during the Third Crusade in the Holy Land, you play as impatient Altair, a brash young assassin who must learn the ways of patience and thorough planning to get to his target. Altair’s mission was to stop not one side of the Crusade, but the Templars who had infiltrated both sides. The game introduced a whole slew of series staples, including the hidden blade, information gathering side-quests, that combat and free-running across huge cities.

A substantial leap in nearly every way, AC2 put you in the fashionable shoes of young Ezio, a youth in Florence who discovers that his father is a member of the order of Assassins. He trains and learns the ways to avenge his father and brother, bringing down the Templars. This entry still stands as one of the most popular ones, and it’s not hard to see why. New mechanics were introduced such as more weapons, hiring groups of courtesans or ruffians to distract guards, and plenty of gadgets from none other than Leonardo Da Vinci.

Staying with Ezio, Brotherhood introduced a management mechanic that put him in charge of the assassin’s presence in Italy. Not only could he summon assassins to kill guards and assist in scraps, but he could dispatch them across Europe to do missions in the name of the order. Known as one of the best games in the series, Brotherhood takes what made AC2 and perfects it, as Ezio battles the Templar family of the Borgias in Rome. It also introduced a very fun multiplayer, with players having to hunt each other.

Once again being put in the now-getting-on-a-bit shoes of Ezio Auditore, he travels to Constantinople to battle the Templars one last time. Now in a fittingly grey outfit complete with wizened beard, Ezio is slower but more skilled and deadly than ever. For the first time in the series you’ll face enemies with guns, you’ll have a special hook to help you climb faster, and play a tower defense mini-game to defend your orders. This game solidifies Ezio’s dominance in the line of Assassins, and as a beloved character in video game history.

The series jumps forward to the American Revolution, following half Native-American, half English assassin Connor. AC3 was a low point of the series, where we lost a fair number of fans. However the game introduced some mechanics that have really enriched the games, for example it brought free-running and parkour to the wilderness, and ship sailing and combat was introduced. Unfortunately after beloved Ezio, Connor was just not likeable enough, but his quest to fight the templar red coats was thrilling, and with his tomahawk and bow really made you feel like a hunter.

Rewinding time a bit to Connor’s grandfather as he comes across the Atlantic, Black Flag is one of the series highlights for one reason: Pirates. Most fans see Black Flag as a pirate game, featuring famous pirates like Bonny Ann, Jack Rackham and Blackbeard, where your character happens to be an assassin for some reason or another. Raid forts on the caribbean, fight ships and hunt sharks, and island hop to fight the templars who are the occupying British. Hardly as skilled and versed in the assassin ways as Ezio, Edward Kenway makes up for it with pirating skills and 4 pistols.

Unity heads back to the cityscapes of Europe just in time for the French Revolution. Going from the open seas of the Caribbean to the towering buildings and cathedrals of Paris is somewhat shocking, but Amo Dorian is once again a rowdy and impatient young European who has no time for the Grandmaster’s plans and caution. It’s a fairly above average entry in the series, with breath-taking scenes like Notre Dame, masses of rioting civilians and cooperative play. Also the city is smaller but more dense, as most buildings had interiors that Amo could dash in and out of. His fighting style was much slower than most but it fitted with the dueling nature of the period.

The series steams ahead to Victorian London, making the most modern setting to date where not only guns were common-place, but carrying a sword around wasn’t quite cricket. Play as both Jacob and Evie Frye, twins who inherit their assassin skills and simultaneously start a gang war across London, and try to hunt down the Templars. The game brought in some cool mechanics like the grapple hook for fast climbing, complex fist-fighting for winning gang fights and sword canes. Also, the twins regularly switch between top hat and hood, making them the least conspicuous assassin’s that we’ve ever played.

Origins brings the series back to us after a two year break, and suitably takes players to the origin of the assassin’s brotherhood. You play as Bayek, a medjay who is sworn to protect the rightful Pharaoh of Egypt. After losing his son, Bayek and his wife Aya go from revenge-fulled assassins to co-conspirators to take down the shadowy cult that wronged them, and also happens to want to control the whole country. Gameplay-wise Origins started a major shift towards a different style of play. Weapons with stats, no counter button, regional levels to set difficulty and very decent side quests. And giant crocodiles. And an eagle that works like a drone from Ghost Recon. There’s really a lot of good stuff in here and thankfully it’s but a stepping stone to the new style of Assassin’s Creed game represented by Odyssey.

Assassin’s Creed: Odyssey is available for pre-order, and releases on Friday. Or buy the Gold or Ultimate edition to play right now!