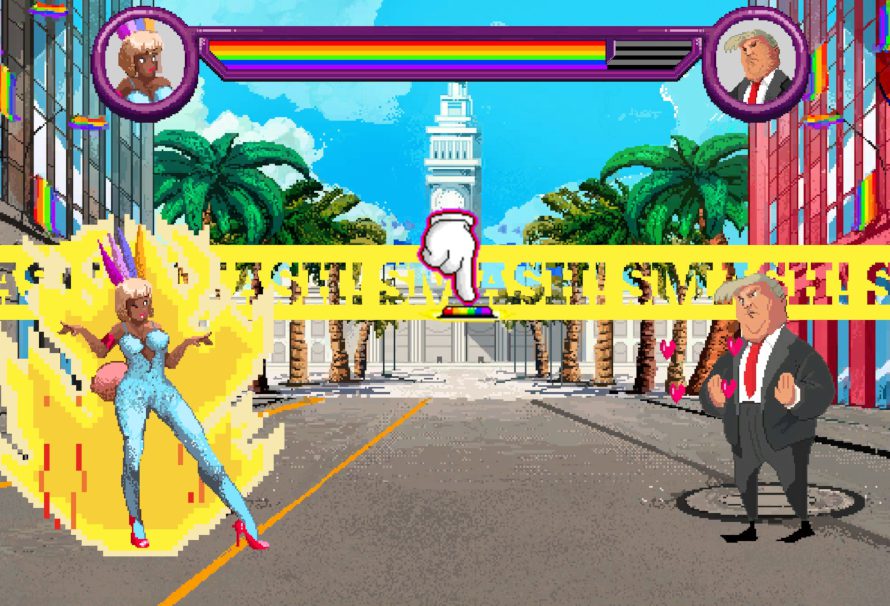 A couple of months back we had a chance to sit down with IV productions, the studio behind Pride Run, at Gamescom in Cologne. Ivan Venturi (CEO & Game Director), Giacomo Guccinelli (Art Director) and Mauro Copeta (Music & FX director) talked us through their colourful new creation and what the game means to them.

In their own words Pride Run is”a celebration of LGBTQ+ pride all over the world”. It’s a music game with two gameplay modes: vanilla – the more traditional rhythm game and play hard – a real-time strategy musical game. But, we wanted a little more than that, so we dug a little deeper:

Who was Pride Run made for, who’s really going to love this game?

Ivan: We started with the idea of creating awareness about Pride and LGBTQ+ rights, that was the first spark, but we made the game for everyone. For example, LGBTQ+ culture is everywhere, in movies there’s the Rocky Horror Picture show, in music there was Queen and Freddie Mercury. We have a lot of LGBTQ+ culture everywhere but it’s still lacking in video games so we wanted to use the colours and the music to bring something new to everyone.

Mauro: You don’t need to be LGBTQ to enjoy the game.

Too right – it’s a rhythm and real-time strategy game like any other out there.

How much effort and care went into the selection of the cities featured in the game, were they picked randomly or was there specific intent?

Ivan: We wanted to be as inclusive and diverse as possible by trying to cover the whole world as well. For example, we have Johannesburg because we saw the world map and felt we needed Africa to be represented. We included Istanbul and Moscow even if there’s no Pride there because we wanted to give people living locally a chance to experience Pride too. Our main aim is to create a beautiful joyful game and help people know about the situation.

Mauro: Most people in western countries know that Pride is a big celebration, it’s about having fun, but it is also good to remember that in some countries it is still not like that.

What have been some of the biggest challenges in making this game?

Ivan: We spent a lot of time when designing the game thinking about violence because if you’re talking about Pride events in some cities there’s always a possibility of it happening. But, we decided to avoid it completely, for example in the final phase of every level you have the dance duel where there’s no kicks or fists. This was a big decision for us from the beginning.

Giacomo: It was not simple to organise all the visuals because the point is inclusiveness so we needed to think about all the LGBTQ+ sub cultures, so it was a little bit challenging, but we found a lot of inspiration in 90’s clothing which really helped us to level up all the visuals in the game.

How much of a big deal was the music for you, I mean it is a rhythm game after all? And how long did it take you to decide and find the right fit?

Mauro: The challenge here is really to try something different every time, because you have so many cities to create music for and in some cases we wanted to find something that is somehow related to that specific city, so for example, with Istanbul we tried to put some local influence into the music as well. The funny thing is I’ve been making music for ten years now in a duo, we’ve produced and played music around the world, so the good thing for me was that I could do something different because I usually do house music, and we came out with six original tracks that will be the soundtrack of the game.

How did you go about turning a parade into an RTS experience?

Ivan: We did it with a lot of prototyping. We worked on it for two years and actually first made it in Game maker and thought yeah it could work. But, we ended up starting again and came up with the play hard mode which is more RTS – you can move groups and recruit people to defend yourself from haters. We did an exhibition in Italy where we tested the game with 3,000 people and realised there was something wrong so we threw everything out again and started with a much clearer idea of how to blend it all together, because even though it is an RTS game it is also a musical game, so the pleasure of the colour and the movements, the physical design became more important to us and we needed to balance the difficulty. For example, a beginner player would need an easier level so balancing the difficulty became a very key point.

What’s your favourite thing about the game?

Mauro: I like the message, I think it’s something more than just a game to play.

Ivan: I like the mechanics we made but the experience of producing the game with the team has been a beautiful adventure.

Is there a roadmap for new content beyond launch?

Ivan: After release there are plans to add new cities and levels and publish the soundtrack with extended versions of the music.

Pride Run releases on PC on the 11th of October, coinciding with International Coming Out day and the 50th anniversary of Stonewall.

The game was recently nominated for the Diversity Award and Game of the Year in the TIGA awards happening on the 7th of November.

To find out more head over to the store or join the Green Man Gaming Community pages to see what the rest of our gamers have to say. Pride Run is available to pre-purchase now at Green Man Gaming and Steam.