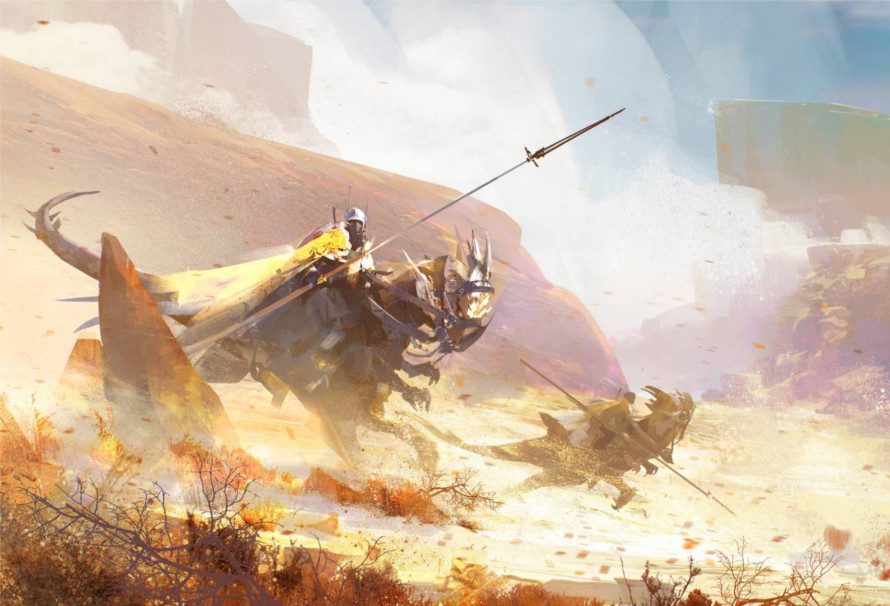 Guild Wars 2’s latest expansion, Path of Fire, is out right now. It adds many new features which, if you’re a fan of the game, should get you excited. Guild Wars 2 has been quietly excellent ever since launch, receiving regular updates including two expansions, and still being one of the best MMOs to jump into today. Forget that other one (Planets of Starcraft?), Guild Wars 2 brings the most varied MMO experience; now with even cooler features.

So, why should you play, or return back to Guild Wars 2 for Path of Fire?

For the first time, mounts are coming to Guild Wars 2! This is a big deal, for a few reasons. Normally players will run across the landscape, or fast travel which means paying. This is such a shame! GW2 has some of the best zones of any MMO, and rewards players for exploring and leaving the beaten path. But sometimes you just…can’t be bothered. Now though, four new mounts allow you to travel to where you need to go without skipping out all the nice actual game. The mounts are: The Raptor, The Springer, The Jackel, and The Skimmer AKA The Dinosaur, The Bunny, The Dog, and The Weird Floating Fish.

Specialisations are a way to divert from the standard path of your class. It allows warriors to become anti-magic, thieves to become snipers, or elementalists to combine several elements at once. Here’s what all the specialisations are, and the ultra-cool names they’ve been given:

Engineer – Holosmith – Create holograms of weapons that will explode when overheated.

Guardian – Firebrand – Summon tomes and use mantra to protect allies and set fire to enemies.

Thief – Deadeye – Mark targets from afar, then blast them with your rifle for massive damage.

Mesmer – Mirage – Become agile and invisible and flit around your enemy.

Necromancer – Scourge – Place life force in the ground, using it to deal damage and to protect allies.

Ranger – Soulbeast – Combine with the spirit of your animal companion to imbue your attacks with their power.

Revenant – Renegade – Summon the power of a legendary Charr to fire conjured arrows from unseen allies.

What does every guild need to show off their power? To separate the successful ones from the failed starters and the waning and dying? What does a guild need to build relationships between members and have dance parties? Why, a guild hall of course! In Path of Fire, there’s Windswept Haven. A veritable oasis in the harsh desert for your guild members, if you’ve left your guild behind, or perhaps want to have a go at creating a successful and profitable guild, start your journey in Windswept Haven.

Okay that totally sounded like a cheesy advert for a hotel, never mind.

Path of Fire not only brings all of the above, but it has new armour sets and weapons for you to collect that are suitably desert-esque. It also introduces Bounties. So you can gather your friends, head off into the wilderness and take down a boss for a hefty reward. You could even come to call yourself a…bounty hunter.

The story also continues from Heart of Thorns. I personally think that the Guild Wars lore is pretty cool, and the story missions are varied and exciting. I look forward every time to getting to the right level so I can play them. God of Fire Balthazar is back with a vengeance, and he’s setting the world aflame, carving a path of destruction through the land with his fiery army of death. Expect some pretty epic story missions.

Path of Fire, then, adds a lot more of what makes Guild Wars 2 great, like a scoop of ice-cream on an already exceptional brownie. If this even sounds remotely interesting, then at least check out the elite specialisations trailer here to see if it makes you want to start a new character…I know I do.