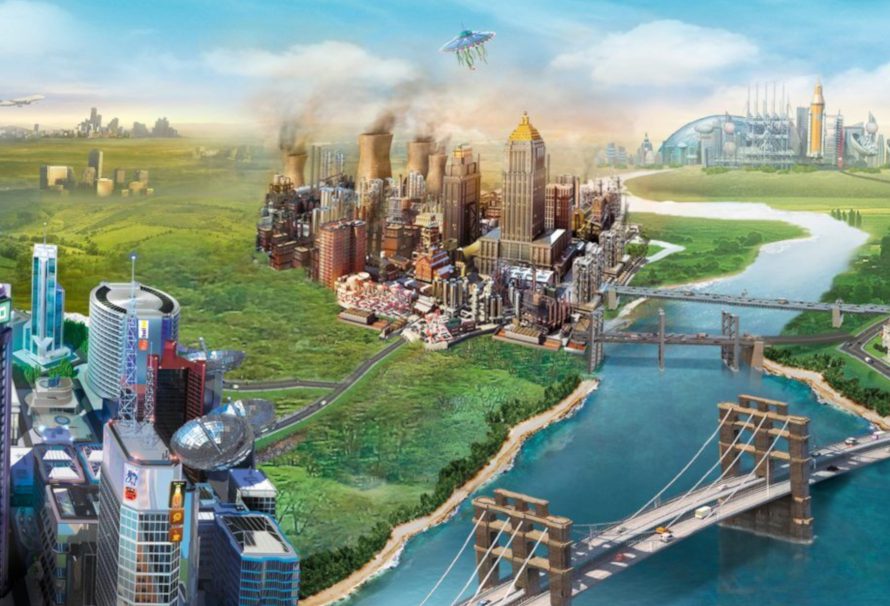 The importance of any given city can wax or wane with the times. It’s only fitting that a franchise centered around building the things should do the same.

SimCity laid the foundations for the modern (and enormous) city-builder genre, but was relegated to a backwater with the disastrous release of 2013’s SimCity. Though fans of SimCity have a huge range of alternatives to choose from, many will always have a soft spot for the series that started it all.

So let’s take a closer look at the history of the SimCity franchise and remember when all this was fields.

The original SimCity released in 1989, almost before graphics were invented. Its chief designer was visionary game developer Will Wright, who also went on to develop a few other well-known sim games, including SimEarth, SimAnt, and The Sims.

The initial inspiration for SimCity came from an unexpected direction. Wright’s first game, Raid on Bungeling Bay, had little to do with his later passions, and was a top-down helicopter action game. It bore more resemblance to EA’s later Strike series of the 90s (Desert Strike, Jungle Strike et al) than anything the Sim franchise would later produce.

Wright found himself enjoying Raid’s level editor more than he enjoyed playing the game, and from this was born the idea of a city-building sandbox game.

In the late 80s, video games were all about adrenaline, arcade-inspired experiences, and stuck close to the basic premise of a “game” by having set goals. The ambitious new SimCity stood out as an odd duck. Publishers felt it wouldn’t find an audience with its methodical, thoughtful gameplay and open-ended nature. Initially, no publisher would even touch it, until it eventually found a home with a small studio named Maxis.

Despite its advanced age, most of the fundamental gameplay features of the series are there in the original SimCity and the game found a dedicated player base after an initial slow start. From there, it would launch an entire genre and even inspire related genres, such as the Civilization series’ 4X gameplay.

The Future is Now

While SimCity’s number scheme got a bit ahead of itself, SimCity 2000 turned out to be an oddly prescient title. It not only released again and again on different platforms throughout the 90s, but it also turned out to be one of the best selling games in the US between ‘93 and ‘99.

The original SimCity paved the way for success, but it was SimCity 2000 that codified the genre by reaching a wider audience. 2000 found its way into the mainstream and was, for many gamers, the first glimpse of how addictive city-building could be.

Graphically, SimCity 2000 featured a new isometric style and tapped into the more powerful hardware of the time to kit out the game with bright, friendly visuals that looked, for the first time, like a real, recognizable city.

SimCity 2000 received ports to a huge number of platforms, with many of these ports departing from the original version of the game to various degrees. It even enjoyed a couple of spin-offs in the form of SimCopter and Streets of SimCity, though neither experienced the same level of success. SimCopter did, however, introduce the language of Simlish to the wider Sim franchise, a feature later made iconic by The Sims.

The follow-up to SimCity 2000 came in 1999, with the even more optimistic title SimCity 3000. In its initial form, it was to be the series’ 3D update, though this version ultimately proved impractical. The developers went back to the drawing board, creating something that felt followed the model of 2000 more closely.

SimCity 3000 was another serious upgrade to the series, however, and harnessed all of the technical progress made throughout the 90s. While it retained 2000’s isometric style, 3000 updated it with better terrain features, including more dynamic height variance and visual distinctions between them.

3000 also introduced waste management to the series, and deepened existing features, like land value and the ability to negotiate deals with neighbouring cities.

Like its predecessor, SimCity 3000 was a roaring success, shifting millions of copies in its first few years and receiving positive reviews across the board. 3000 also re-released in expanded and updated forms across its lifespan, much like 2000.

SimCity 4 advanced the series on again, this time splitting gameplay between three modes: God mode, which allowed players to mess with terrain and trigger disasters, Mayor mode, which acted like the traditional SimCity experience, and MySim mode, which allowed players to create unique Sim characters and watch them live out their lives in the city. SimCity 4 was praised as a major step for the series, including the leap to fully 3D graphics for the first time in the main series.

Pompeii was a glorious city before it was buried almost overnight by a natural disaster.

2013’s SimCity wasn’t received well, is what we’re saying. The game’s newly online-only nature clashed with server outages on release, meaning many reviewers were left unable to play the game at all. Map sizes were smaller than in previous entries to facilitate online play. On the whole, the experience left a sour taste in the mouth of fans, who were, at that time, still relatively new to the idea of online-only games.

SimCity 2013 wasn’t a complete write-off, though. Most agreed its fundamental gameplay elements weren’t bad, and it brought new levels of visual fidelity to the series. Streets and the zoning associated with them could take more organic shapes, meaning cities could resemble the real deal like never before.

Even so, this reboot of the franchise torpedoed the brand’s popularity and put the IP back on the shelf, where it remains to this day. Development studio Maxis closed a couple of years later, absorbed into the larger EA ecosystem.

To borrow a phrase: gaming abhors a vacuum. While SimCity may have gone the way of Detroit, the management sim genre remains a hugely popular niche, injected with new life by a raft of newcomer IPs released throughout the last decade.

By far the biggest spiritual successor to SimCity is Colossal Order’s Cities: Skylines. Released in 2015, Skylines has expanded through DLC and free updates to become the definitive city-building experience in modern gaming, to the point that most SimCity fans have readily accepted it as the heir to SimCity’s legacy.

Skylines isn’t the only game in town, however. There are plenty of other city-builders on the market, though most depart from the modern trappings of SimCity. Popular examples of the last few years include titles like Frostpunk, Tropico 6, Banished, Foundation, Dawn of Man, and Anno 1800—and that’s not even an exhaustive list.

City builders also thrive on mobile devices, though good luck finding one not centred around grinding and long wait times. While they may alienate die-hard fans of the genre, these mobile games have allowed the city-building genre to access

We Built This City

While the mainline SimCity franchise has been silent since 2013 and Maxis has closed its doors, there’s still some faint hope for the series. If the last decade of gaming has proven anything, it’s that gamers love a well-executed nostalgia act. At the same time, SimCity’s child series The Sims continues to find a wide audience. If EA can put together the right team, a regeneration project could be enough to put SimCity back on the map.

Would you like to see a new SimCity game? What features would it simply have to have? Comment below and join the Green Man Gaming Community Site to see what all our gamers have to say.