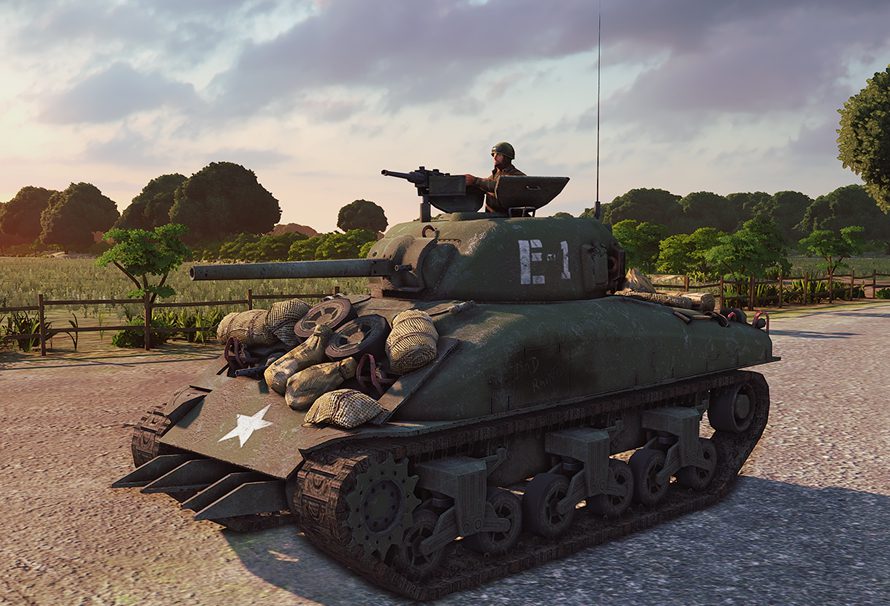 One of the most important types of units you’ll have in Steel Division are tanks. These mechanical beasts are capable of providing awesome firepower, armour and pushing power onto the battlefield. With divisions such as the German Panzer division, tanks will be more or less essential to every battlefield. Here’s a list of just some of the more famous tanks that you’ll get to control, and their history in real life.

The Stug III was one of the most produced German tanks in WW2. Using the chassis of the also successful Panzer III, the Stug was fitted with an artillery 7.5cm turret, and was tasked with taking out enemy fortifications with explosive rounds. This turned out to be quite effective against enemy armour as well, as the enemy tanks at the time were fast but lightly armoured. Thanks to its low profile and strong gun, it started the German’s reputation for solid tank destroyers.

More commonly known as the Sherman by the British Forces, the M4A3 was the most produced Allied tank in WW2. It came in multiple iterations, equipping different guns (right up to the British 17 pounder, creating the Sherman Firefly), as well as being used for tank recovery, mine clearance, and even amphibious landings. It was fast, agile and could pack a punch at short-range. The US sold these to multiple Allied nations, they even created a heavy version, the M4A3E2, the ‘Jumbo’.

The Cromwell debuted during the invasion of Normandy in 1944, continuing the British tank doctrine of having fast cruiser tanks for lightning strikes, and slow, armoured tanks for infantry support. The Cromwell was one of the fastest tanks in the war, lacking much in the way of armour, but having immense horsepower, and a quick-firing gun that could fire on the move. Thanks to their speed and reliability, they excelled as reconnaissance vehicles, command vehicles and flanking tanks, at last turning the famous ‘blitzkrieg’ tactics back on their creators.

The Churchill was named after the British Prime Minister as he was a champion of the tank during WW1. It was the heaviest Allied tank, with a low, long body that excelled at traversing difficult terrain and was mostly designed for landscapes criss-crossed with trenches. The Churchill VII was the second major iteration, boasting heavy armour than the Tiger 1. Its chassis was used to mount other tank variations, including the Crocodile that was equipped with a flamethrower, and the ARK, that could build bridges.

The Panzer IV was the most widely produced German tank in the war, seeing action in every theatre, and being produced continuously throughout. It served as the base for many iterations, much like other popular tanks, but it was also the backbone of the german panzer divisions on its own. It dominated early Allied tanks in North Africa, and continued to rival newer threats, including the Russian T-34. Indeed the Russian tank crews were issued Panzer IV instruction manuals translated into Russian, so that, given the chance, they could use the Panzer IVs instead of their T-34s.

The Koenigstiger, or Tiger II, was the first tank on this list that saw its debut in Normandy in 1944. It matched the sloped armour of the Panther with the thick armour of the Tiger 1, and had the absolutely deadly 8.8cm gun, capable of taking out Allied tanks at extreme ranges, with high accuracy. Allied tanks such as the M4A3 and Cromwell could hardly penetrate its armour, and only Sherman Fireflys with their 17 pounder guns had a chance, at their side or rear, and at much closer ranges. The only way the Allies could defeat the Tiger II presence was through relentless air strikes, hitting them in transit on roads.

The Cruiser Challenger (not to be confused with the modern Challenger main battle tanks) was extremely ambitious bit of tank design. Strapping the 17 pounder gun onto the chassis of a Cromwell, you had a tank that could reach 60KPH but had the stopping power of a Sherman Firefly and the British army’s strongest anti-tank guns. Unfortunately the Sherman Firefly was easier to produce, and more armoured and survivable all round, but 200 Challengers were deployed, and were faster, lower and had better gun depression.

The Panther has the bitter tale of being a great tank objectively, but came in at the wrong time of the war, where the resources were not there to make the best out of it, and get it optimised completely. It had the same frontal armour, firepower, engine as the fearsome Tiger I, but it came with better speed, maneuverability and off-road ability. What it lacked was reliability, and this in the fields of Normandy, was bad. The allies may have had more worse tanks with their Shermans and Cromwells, but at least they reached the frontline, and in high numbers.

Let us know your favourite tank, and are you finding them any use in Steel Division: Normandy 44?