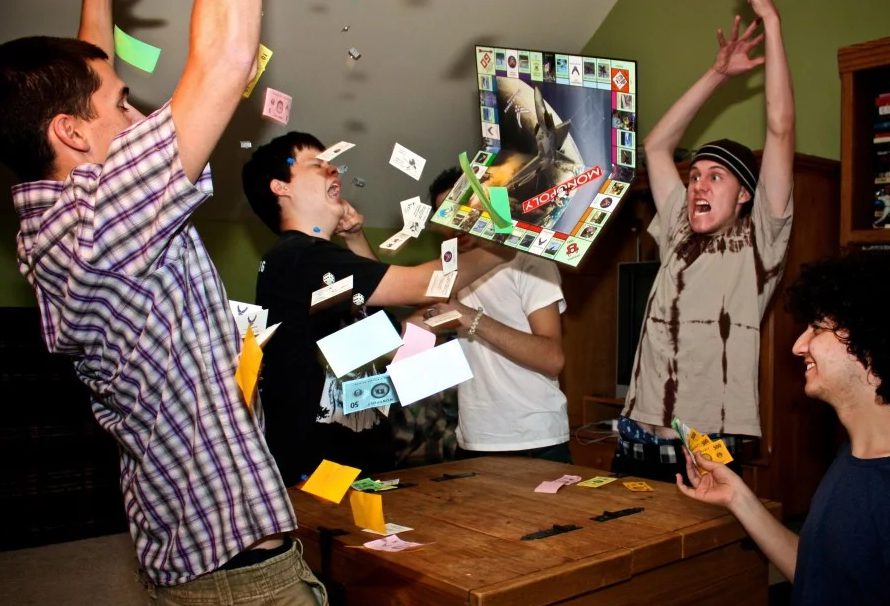 Chances are if you’ve played a competitive board game, you’ve gotten amped up over it. It’s just a part of the tabletop gaming experience, but it really can put friendships to the test! So if you’re looking to find out who your friends really are, then here are the top 5 tabletop games that will separate the BFF’s from the arch enemies.

Monopoly is one of those board games that I have never walked away happy from. Corrupted bank managers, ruthless team ups, and luck establishing hotels are just some of the plights of betrayal you will face during this 12 hour cut-throat, bankruptcy simulation. Stealing money from the bank while your friends aren’t looking can’t save you from the mugging you will receive when you land on their deluxe hotel on boardwalk Avenue.

By the time the game ends, your friendships have been morphed by the experience, hours of your life has been spent being tortured by the frugal-mortgage champion, Stockholm Syndrome begins to set in as you leave with a sense that somehow you deserved this moneyless fate.

Munchkin appears to be a light-hearted and comical game where players take on the role of an adventurous dungeon delver. It’s a ruthless a journey of parables. Rounds consist of each player taking a turn to smash down a dungeon door, then fighting and looting the beasts that lay beyond.

Here’s where the game goes sideways, players may play their loot, bonus cards or monster cards on another player’s turn to boost or diminish the monster(s) being fought. Many will happily help you for some or all of your loot, and others will supersize a beast to coerce you into needing their aid, or simply to watch you suffer under their wrath.

This adrenaline-packed adventure is among my top 5 favorite games of all time. The basic premise of the game is that you are a team of space-faring individuals who stumble upon a derelict starship. Once boarded, the ship goes into lockdown and parasites appear on the ship. Within the first round of the game, one of the players becomes infected with an alien parasite, and it’s their job to infect the rest of the players by any means possible while the other players hunt for the way out. One of the main rules of this game is ‘No infected player(s) may reveal or suggest themselves as an infected’, so it requires some witts to outmaneuver and convince your friends to fall into your traps and ploys to infect them while also not revealing your true intentions.

On the surface, Catan is about developing and growing a settlement or tribe— but in reality, the primary goal really seems to be about making your friends beg for your precious sheep, wood or wheat.

At its heart, Catan is all about resource management and being the player with the most goods. To win at a game like this, you need to have nerves of steel and a bit of ruthlessness in your backbone.

It may not seem like it would be, but battleship was the nightmare-inducing game of my youth. I was usually the one who spent the first 20 minutes setting up the perfect strategic ship setup, planning each of my ships locations with calculated precision. Just to have the booger picker across from me, usually my best friend, plank their pieces down in less than a few seconds.

For the remainder of the game, ship after ship, I would get destroyed from what seemed like completely random shots in the dark. Completely perplexed, I would remove my glasses to rub my eyes to prolong my inevitable demise and find that over the next few rounds my opponent’s accuracy would suspiciously fall.

What are your favourite board games to play with your friends? Leave a comment below and stop by the Green Man Gaming Community pages to see what our Gamers have to say.