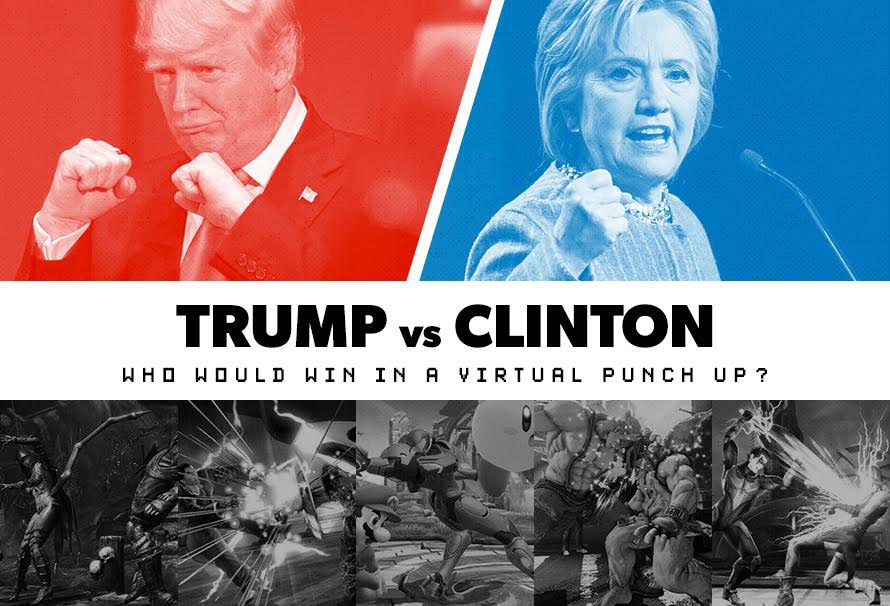 Everyone has been talking about the Presidential Elections. The battle between Trump and Clinton has everyone talking and we will finally know who will win the presidential battle next week!

The very idea of Trump and Clinton going one on one got us thinking. If the 2 candidates did settle their differences over a few popular fighting games then which characters would they choose? Here is a list of what we think are the best fighting game characters for both Donald Trump and Hillary Clinton.

Kazuya’s move set is more fitted to Trump as he uses his own version of the Shotokan karate fighting style, which combines powerful moves with some pretty breath taking technical combat. This means he can get some really powerful blows in when you least expect it. Like Trump, at one point Kazuya also inherited his multi million dollar company from his Dad (granted his Dad was resurrected a short time after, which started a massive battle between Father and Son. But we will skip over that)  so Trump can relate to Kazuya on a personal level.

Another character who owns a multi national company, M.Bison is a great character for Trump as his fighting technique mixes the Lerdrit fighting style with a cosmic power of Bison’s own devising, meaning he can deliver some devastatingly powerful attacks. There is also this great move that Bison does called the ‘Head Stomp’ where he jumps in the air and lands feet first on his opponent’s head. Nice!

You are probably thinking we picked Shao Kahn for Trump because he is the the supreme evil ruler of Outworld. Whilst Shao Khan is not many people’s favourite character story wise, his fighting style fits well for Trump as he uses both  Tai Tzu and Lui fighting styles. These techniques both throw out some pretty powerful punches and they also come with a massive hammer which can do some considerable damage if used right. Right up Trump’s street we think.

Lex Luthor – Injustice: Gods Among us

The CEO of Lex Corp and all round technology enthusiast. Lex Luthor is a great choice for Trump as he comes complete with his very own Kryptonite powered war suit. Not only does it deal considerable damage in hand to hand combat it also comes complete with all sorts of gadgets such as a gravity beam, a laser lance and the ability to boost dash. A great character to use if you want to keep your opponent guessing.

Probably not the most technical of fighters, Wario works well for Trump as he has some surprisingly deceptive acrobatic skills and special moves. He also has a plethora of unusual yet useful attacks that will keep any opponent on their toes. Wario is also a bit power hungry, but we will gloss over that.

Nina is known as the deadly assassin and her mix of Koppo-jutsu and Hapkido is a great fighting style for Hillary as her moves are quick and accurate. Her overall fighting style should vanquish Trump in a split second. Nina’s special ops characteristics and her time in MI6 should appeal to Hillary as well.

Code named ‘The Killer Bee’ Cammy is a head strong woman who is devoted to her job. Her Special forces combat fighting style is speedy and very technical. Possibly the perfect Street Fighter selection for Clinton as she can pretty much take Trump by surprise. Also Cammy likes cats, that’s always a plus!

As a member of the United States Special Forces, Sonya Blade is possibly the most fitting Mortal Kombat character for Clinton as her special ops training combined with her Tae Kwon Do fighting techniques make for a cocktail of pain that she can rain down on any unsuspecting opponent. We think Sonya would be good friends with Clinton in real life if that was ever a possibility.

Cat Woman – Injustice: Gods Among Us

Everyones favourite cat burglar is the perfect Injustice pick for Clinton as her cat like reflexes would leave Trump’s slower charactes in the dust. Selina Kyle also comes armed with razor sharp cat like claws and a whip to attack opponents from a distance. If you think trying to inflict damage on cat woman was hard, then try catching her first.

The ever deceptive Sheik is actually Princess Zelda in disguise (Sorry, spoiler alert). Her speedy and sight moves mixed with her shadow attacks make light work of any opponent. Much like the other characters in Clinton’s line up Sheik’s attacks are more about hitting fast and precise which we think is more fitting for Hillary Clinton.

So there you have it, do you think we have selected the right characters for the Presidential candidates? Let us know in the comments below.