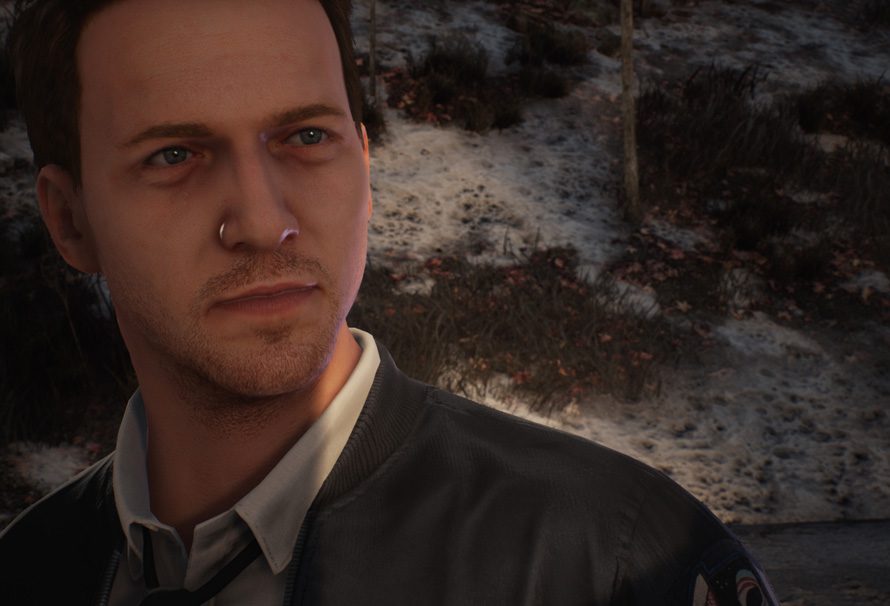 At EGX 2018 we sent roving reporter Jason Coles to meet with the people behind some of the most exciting upcoming games and get us some juicy scoops. You can see the others here, but meanwhile here’s his interview with Pierre-Etienne Travers, the art director of Twin Mirror:

Okay so Twin Mirror is a narrative adventure game which is a psychological thriller. It is the story of an investigator named Samuel Higgs and he has to go back to his home town, which is in West Virginia, because his friend has just died and he need to attend the funeral. It is very difficult for him to go back because he has lots of bad experiences there. A few years before this his marriage broke down so he left the town. Having to go back is not a good thing for him.

At some point he wakes up with no memories of the previous night and he finds his shirt covered in blood. Starting from there, he is startled of course, he has to go around the town and investigate to try and find out the truth. So as a thriller the main direction was to make a really cold and rural atmosphere, and West Virginia is a great place for that. It is an area that used to be successful because of coal mining but it isn’t anymore. As a result the people there are really struggling for survival which makes for a really interesting setting.

Most importantly the core concept behind Twin Mirror is duality. So Sam also has his inner world called the mind palace, this world is very different from the real world . Sam is not a confident guy, he doesn’t do well with people, it just isn’t his thing. So when he was a kid he created this inner world which is basically the exact opposite of the real world. Where the real world is cold and harsh and very hard on him in this place he is in control. He feels comfortable and it is why the mind palace is so comfortable. The duality in this game is so important so I wanted to make sure that you could see that the real world was cold but his mind palace was warm.

The other aspect is that he has a double. It is part of his personality that he doesn’t express in real life, so he’s more exuberant. The most important thing about the double is that he is a grey character, he isn’t good or bad, he just is. Designing him was really interesting because Sam is kind of bland, so the double is the opposite and is very exuberant and colourful. That was the idea behind the art direction.

With the mind palace, you said about making it a separate place, did you have to research into what mind palaces were?

Absolutely, the mind palace normally is created from real places that the person is comfortable with. So often they are their parent’s house. The mind palace of Sam is based on his childhood memories of going on holiday with his parents to the sea. So this is why the theme is so colourful like the deep blue sea and the sky, the rocks and the sand itself. One of the twists is that classical mind palaces are rooms, we decided it was too limiting. The goal was to create a very dense world with no boundaries, it is a tower made up of different layers, each one is a level of Sam’s memories. At the same time though it is constantly moving, it’s not the same thing every time. It is a tool for him because it is a space where he can solve puzzles, he goes into his inner world to reorder things in his mind to find the solution to a puzzle. So when he wakes up in his room and finds the bloody shirt he can find other things in his environment to influence his mind palace, so you have to find different combinations. So when you find the truth everything will become crystal clear.

Mind palaces are usually used to help with memory, is that what this is or is it more of a safe space for Sam?

It is both for Sam, both a safe space and a place where he can take stock of his memoires.

Is one of the aims of the game to talk about mental health and isolation?

No, while he is suffering and has the double it is not to the point of being medically assisted so no one knows about that at all. So it’s not something that everyone knows, he is the only one to see it and he manages to live even if he isn’t doing well. It is more of an aspect of his personality rather than a mental illness, same with the mind palaces, it is just how he thinks. He isn’t doing great, but there is no illness behind it.

What is the biggest input that you personally have in the game?

I think with this game the biggest thing I did was how to make something interesting from a real place. You have to be realistic, respectful, but still make it very interesting. You might think it is something obvious but it is very hard to do. The main process was to design the town in West Virginia, which was tricky as the team is based in France. At first it was more about artistic vision but it just didn’t work out that way. So we started establishing some rules, so we used things like google maps. We could drive around West Virginia and get a feel for what things could look like and where we were going wrong. I want for someone from West Virginia to play the game and feel like it is somewhere that could be near them. That was a really interesting process. Another aspect was the rendering and the colour scaling, we took some references from movies. One of the main inspirations was from David Lynch but there where others as well. I tried to recreate that kind of colour pallet from those types of movies.

Can you talk me through more of the way the double looks?

So the double, which is his name, it was really interesting because we had to describe the character with his looks. He isn’t good or evil so we tried to find a look that suited him. At first we tried to just make a really badass character but that didn’t work because he almost looked evil so it wasn’t conveying the right idea. What we did instead was taking the inspiration from the narrative, we know that the double is there from a long time ago and that he is more of a vision of what a successful guy would look like, but in a childish way. That’s why the design is a little bit off-the-wall, but at first I was looking at Leonardo DiCaprio in the Wolf of Wall Street but after that I came to even more crazy outfits based on that preppy style.

Okay awesome, is there anything else you’d like to say?

Yeah, the game will be available early 2019.

Twin Mirror will be released early 2019.