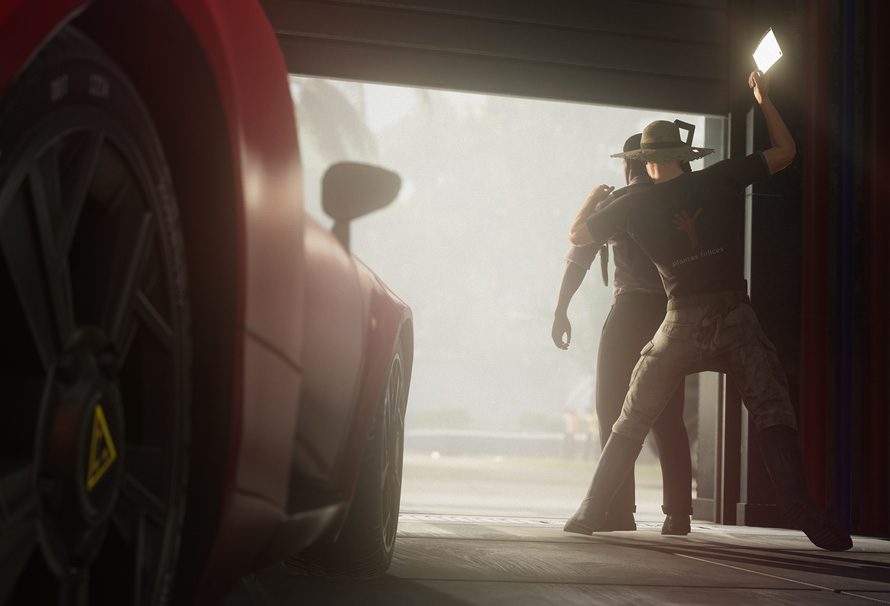 Recently I headed down to Warner Bros for a little hands-on time with Hitman 2 ahead of its release on the 13th of November. The level I played through was the recently announced Colombia level with three targets and the traditional Hitman variety in approaching them. It’s an absolutely huge level, a vast space where you can plot your own route through the challenges and take your time to make the perfect kill.

What followed was a cavalcade of Chuckle Brothers-esque calamity. I am not a patient man, nor am I good at Hitman games.

But, I absolutely loved it.

Upon starting the level, our friend Mr 47 found himself in an impoverished village, all mud and locals hanging around aimlessly. Deciding that the nearby target of the cartel’s PR woman would be the logical start, I set off in the direction of her villa.

First attempt: trying to scale a wall next to her villa, except a local wouldn’t move out of the way.

Second attempt: trying to scale a wall next to her villa, but this time I smashed a soda can in the local’s face and hopped the wall. Success! I then proceeded to try and steal a guard’s clothes so I could sneak about the villa in peace.

Except I did it in front of a camera, calling all the other guards to that location. I managed to hide in a bin while they ranged about looking for me, waking up the unconscious, and now nude, guard in the process. After a while they gave up so it was time to begin my prowl again.

This time they saw me as I flounced about upstairs, and upon turning a corner I found my target. Stood behind two guards. With guns. Big guns.

Third attempt: this time I executed the perfect hitman execution. I waited until my target was walking about the village, then shot her in the head with the iconic silenced silverballer, and then ran away as fast as I could round a corner and down into another part of the map.

While running away I overheard a snippet of conversation about a celebrity tattoo artist who was in town to tattoo my second target, a cartel boss who was holed up in an expansive mansion.

Aha, thought I, time to do some sneaking.

First attempt: I located the tattoo artist but he was in a busy bar. I tried to get him to leave by shutting off the fuses to the bar, but this only made the bartender leave. Eventually he got so pissed off with me he called the guards. I got shot.

Second attempt: I decided to use my coins to lure out the tattoo artist. Throwing them on the guard just caused the tattoo artist to get pissed off with my littering, and he called a guard. I got shot.

Third attempt: I garrotted the tattoo artist. It was cathartic. I got shot.

Fourth attempt: In frustration I decided to put a coin in a jukebox, this caused the tattoo artist to take a phone call outside the bar instead of inside it. He wandered around the corner to a place where I could ambush him safely.

Now, dressed as a tattooing gentleman I made my approach to the mansion. Along the way I had to divest myself of all my weapons but that’s fine, I figured I wouldn’t need them as I’d soon have a razor sharp needle in my hands.

The mission went much smoother from this point onwards. I made my way inside the mansion, taking a selfie with the mobsters’ wife, and proceeded to meet up with the cartel boss to give him a touch up on an old tattoo.

As soon as we were alone I jammed the tattoo needle into his ear and straight up into his brain.

The third target was a heavily guarded old man who’s also the drug cartel’s chemist. I found him wandering his coca fields, stopping to check on the progress of the work going on there, and on a special project.

It’s here I heard snippets of information about the chemist’s special project involving a rare flower that only grows on the edge of cliffs. Aha, I thought, this’ll be an easy opportunity to push him off something high.

Disguising myself as a chemical scientist, I explored the region and found his lab which held the current sample. Dealing with the many chemists also found in there (one by one, I had learned some lessons by this point) I found the sample and tampered with it. The hope being that the target would have to head on up to the cliffs to collect the rare flower.

Unfortunately in my haste to do this, I’d accidentally left a body in open view where the targets’ guards could see it. Putting the area in immediate lockdown they moved the target to a series of caves which ran through the Colombian region and began to prepare for me.

They weren’t quite prepared enough, however. Realising my time was running out for the session, I grabbed an assault rifle and began something known as ‘gunning everyone down until I got to my target’. Which worked a treat, albeit an unstealthy and un-Hitmanlike treat.

Three down, and by running pell-mell to a waiting boat I managed to make my escape.

Final score? The absolute worst you can have and still complete the level. But I did it, and that’s what counts.

What did I think?

Hitman 2, if the Colombian level is anything to go by, is a continuation of the glorious return to form that 2016’s Hitman provided. Huge levels with interconnected events and experiments to try combine with a real sense of danger from the improved NPC AI. Hitman 2 feels like a sumptuous feast, one that you don’t want to consume too quickly because it’ll be over or worse, you’ll choke.

As I said above, I’m no good at Hitman games, but this was the first time I felt that the formula really ‘clicked’ for me. I began to see that cause and effect that’s the series’ trademark, and began to experiment with NPCs and events to try and manipulate the game into doing what I needed for my mission to be successful.

If you have any affection for the previous Hitman games it feels like Hitman 2 will meet your expectations and surpass them. Even for me, a Hitman noob, it was a damn fine place to spend a couple of hours in.

Hitman 2 will be released on the 13th of November.