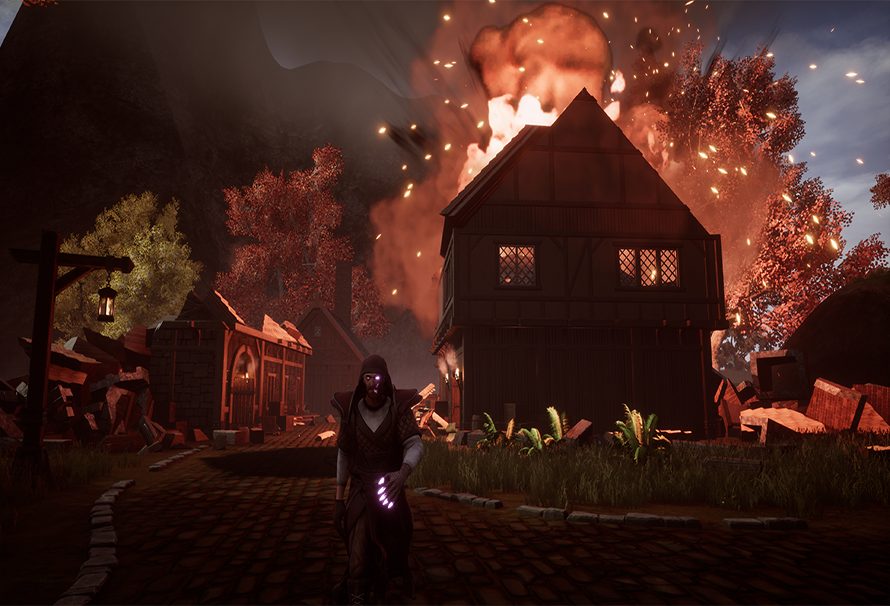 After the Demon Lord Berial was slain by the brave hero, the world is once again peaceful. Many new adventurers inspired by the heroic deeds took up arms to help people throughout the land. Little did everyone know however, that the progeny of Berial still walks among them, waiting to unleash its accursed father and wreak havoc upon the world once more…

As one of many new adventurers joining the guild, you never quite expect that you are about to be involved with the series of unfortunate events and ill omens that will shake the world to its core. Follow the path to glory as you walk the path of the brave and become the new hero that the world needs.

Experience the classic action-RPG experience, fighting myriad enemies while solving quests throughout your adventurer. Help the people and gain new knowledge to learn new skills and abilities. Keep your eyes peeled for some parodic, tragic and astonishing experience that will unfold as you made your exploits known….

Fast real time combat
Battle your enemies with wide arrays of weapons, skills and abilities. Unleash your attack upon them while avoiding their counterattacks with might and cunning to achieve victory!
Customize your character to match with your play style.
Every skills will benefit your with passive effect as you equip them. Equipping Magic skills will raise your Magic Attack and make you a powerful caster while lowering your Physical Attack. Fire Skill likewise, will attune you towards fire resistance but will also
makes you vulnerable to water.
Equip Signet skills to gain access to new abilities such as Double Jump, Healing Boost and Quick Cooldown. The choice to customize is entirely yours!
Various type of Equipment
Choose your equipment wisely as you arm yourself to brave new challenges and adversaries.
Monster Arena
Challenge the vicious monsters of the arena for BP! Exchange BP for fabulous prizes afterwards!.
Secret Area and Boss
Get ready to explore the world for hidden areas and secret challenges that will enrich your experience!!

The Last Hope
The Last Hope Trump vs Mafia
Drop Hunt
Lamp Head
Project First Contact
Space Hero Line
The Last Hope
You are a scientist who was working on the development of a time machine. When the experiment began, a wormhole was formed and mankind and most of wildlife disappeared. Now you are humanity’s last hope because you the last man alive. Your mission is to find the time machine.

Drop Hunt
Be prepared for next impossible challenge in the adventure of “Drop Hunt”.
Challenging game in a brain puzzle style. You will need to solve eighty exciting puzzle levels that are spread across four various locations – pizza, fridge, desktop, glass, to restore the ELEXIR. The amazing animation and challenging gameplay of “Drop Hunt” will engage you right after the first level.

Lamp Head
The protagonist of this game is a strange man with a lamp instead his head who needs to breach out of the darkened and dangerous odd place at whatever cost. Are you ready to prove that your reaction is outstanding, shunting between sharp barriers, collecting bonuses, remembering that in the end of every dark path the light of victory awaits?

Project First Contact
As of lately, there has been a rising occurrence in strange events and people reporting hallucinations. Unidentified objects are approaching Earth, while mankind in is full alert. Hundreds of UFOs have subjugated Earth nations and the aliens began their so-called “Project First Contact”: conquest of the entire planet.

Space Hero Line
The time has come for the brave to rise up. One of the most dynamic game, seriously pinch your nerves now wanting to see the opportunity to personally enjoy.

It takes place in a diverse world, full of enemies from your worst Nightmares!
In your quest to save the Noctum from a self-proclaimed ruler, you’ll meet weird and unique friends and foes. But tread carefully when talking or interacting with NPCs: Quirky characters and their reactions can have game-changing consequences. Fast reflexes and a taste for exploration are key if you intend to collect rare items, vanquish enemies, and eventually face your deepest fears.

This story takes place in Donorok, in the state of Noctum. After the King of Noctum, Aster, disappears, chaos rules over the world. The relationships between Monsters, Mongos and Dreamers are completely unstable, and Donorok – the land so heavily affected by the chaos – slowly absorbs terrain from the surrounding regions.
Balder has taken over and has ordered the monsters to retain any child who falls into the Nightmare. The key to continuing his rule is with the Nightmare Boy, Billy.

Character control is responsive and dynamic. As you progress through the story you will discover new abilities such as double jump, triple jump and hanging on walls. Powerful spells, explosives, and friends along the way will aid you in untraveled paths.
As the player exploring every corner that forms the Nightmare World, you will slowly complete your map.
There are many collectibles throughout the World that will decide which of the different endings the story concludes with.
Characters on your journey will offer advice, but it’s up to you to take it – or not!

A reign of terror never feels so satisfying as when you leave a literal pile of rubble in your wake. Giving wizards a much-needed makeover, Fictorum is an action role-playing game that features fully-destructible structures, a randomized node-based world map, and a satisfying magic system with on-the-fly spell shaping and customization.

In Fictorum, your mage wields real, legendary power right from the start—unlike those found in most magic-centric games. Our magic system uses a dynamic and intuitive spellcasting and shaping system that grants the player an unrivaled level of customization and reconfiguration. Up to three runes can be applied to a spell, each affecting a different spell characteristic. The runes are easily swapped to suit the player’s current need, interest, or whim. You might amplify ice blasts to freeze enemies in place, expand the radius of a fireball explosion to crumble a bridge and hinder pursuers, or chain a lightning attack together to strike several targets in a cluster. Shaping makes spellcasting much more tactical and satisfying.

Rather than starting out as a hapless farm boy who stumbles into his powers and avoids enemies or entire areas until leveling up, players take on the role of an established wizarding badass, hell-bent on his mission for revenge. Yet challenge is abundant—the wizard must bring down a sprawling empire by himself, besting scores of bandits, cadres of Inquisitors, and hordes of corrupted abominations on his quest for vengeance. The protagonist has access to unlimited magical powers, making the game less about spamming that one spell that works passably well until it becomes upgradable. The experience is more about tailoring your magical arsenal, giving the player a wide range of freedom and the ability to effectively, efficiently, and enthusiastically destroy every obstacle. The randomly-generated world map features locations where every structure (from large buildings to bookshelves to tables to even a lone fork) can be demolished.