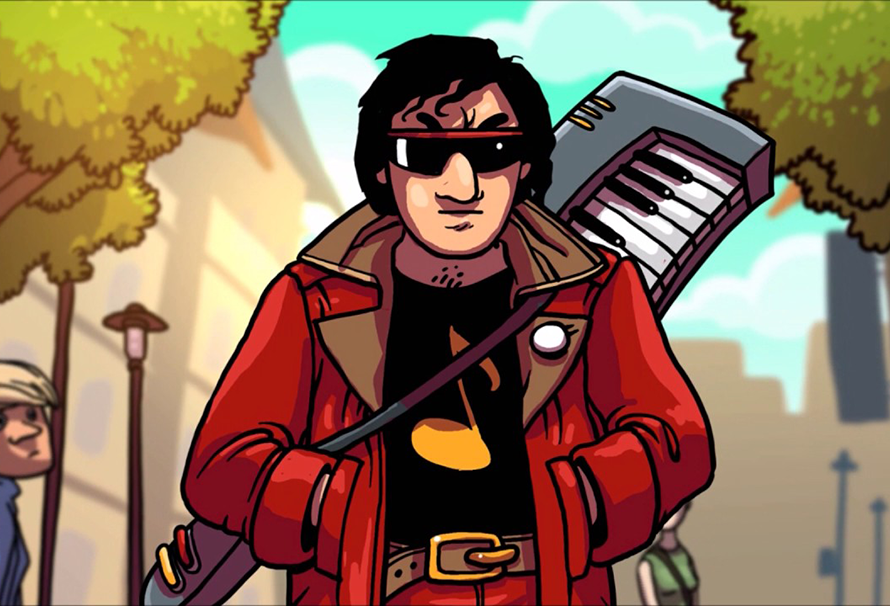 Defeat famous opponents in musical duels. Immense yourself in fantastic story of Frederic’s endeavors. Catch all the Easter Eggs and subtle parodies hidden in the background. Practice your skills until perfection and become the Master of the Piano.

The world of music is once again threatened. The art of soulful music, the kind that touches your heart, is in grave danger of disappearance. The evil forces that you fought so bravely are back! And they are even more powerful and desperate. Once again you’ll need to step into Frederic Chopin’s shoes and face opponents that have only one agenda – to enslave the musical world, mass produce soulless artists with their same-sounding radio hits, and reap enormous profits, hindering any creativity in the process.

– 10 challenging musical duels with some of the most renown pop stars
– 10 fantastic, catchy tracks, inspired by Frederic Chopin’s composition and different music genres.
– Quirky story with tons of parody and twists
– Extremely easy to get to, but hard to master gameplay
– Hand-painted animated comic
– Achievements and leaderboards

Grimind is a 2D, physics based, adventure, platform game in horror/creepy theme.

Grimind casts you into forgotten caves and ancient crypts, without memories. While being there you have to demonstrate great manual skills to pass obstacles and solve non trivial puzzles to get out of scary environment and additionally discover what are you doing there alone – but is it certain… that you are there… alone?

Dynamic gameplay combined with a frightening experience
Physics based gameplay – It gives you the possibility to do whatever you want. Every single dynamic object can be dragged, carried or thrown which gives you enormous freedom.
Narration – While playing, the character is talking, telling the player what he feels, if he’s scared, or what he thinks about the current situation.
Challenge! – Grimind isn’t an easy game, so you can forget about holding just one key and passing through the levels. Besides dexterity and input skills, there is also a large number of logic puzzles to solve. Your brain will be tested and you’ll not get bored.

“When you die, you normally have only one simple wish – to return and tell them – “Hey, guys – it’s OK! No need to feel sad! Cause you know what? It’s actually OK on both sides, really.” But returning is not easy – the only way would be dreams – “half-dreams” – “ghost-dreams”. The problematic part is if you get stuck – you turn into a demon. Hard to say what exactly it is, but we presume it’s a painful and useless existence. Better to avoid doing this, really.
My personal “problematic part” is that I am already stuck here. No idea how I’ll get out this time…”

On his journey to the “Other Side” Reader (and his “natural companion” Writer) meets various Ghosts and Demons, Holy Spirits and Gods. He also meets Singer, who is neither Ghost, nor Demon. At some point she becomes important to Reader. Realizing this won’t stop him though.

The world of Ghostdream should be scary, but it is not – it is just dark. The story should be sad since all the characters are more or less dead, but it is not, because they normally remember nothing, except some minor detail or two (for example the protagonist remembers himself reading a book – this is why they call him Reader. It is his only memory after all).

Ghostdream is a retro-style Point and Click Adventure game with puzzles, exploration and story.

55+ entirely animated locations (rooms)
10+ characters
8 Major Puzzles (no items required, exploration of the whole accessible area is a must) + standard adventure actions (like get here, talk there, press this, press that…)
16 000+ words story (fully voiced)
about 10 hours to beat Ghostdream for the first time.
20+ songs OST
60 pages art book (with a puzzle guide)

The Legend is back!

Fasten your seat belt and take a ride in the iconic rollercoaster – now in a remastered version! Prepare yourself for chills and thrills with this intense experience. Sit comfortably and explore the medieval city while riding on the castle walls. Take a look on the beautiful surrounding landscape full of mountains and trees and admire the shimmering lake surface. Rift Coaster HD Remastered is a perfect way to introduce your friends and family to the rich world of virtual reality games – everyone will enjoy the ride.

Rift Coaster was one of the first VR coasters and with the Steam release you can now experience the game in an improved version. Running on the Unreal Engine 4, Rift Coaster not only brings new features and tweaks to the visuals and gameplay – but also if you have the HTC VIVE, Oculus Rift, or another OS VR device you can enjoy the game as it now works with the latest VR hardware.

Enjoyed the ride? Be sure to try our newest title – Dream Coaster VR, an unforgettable ride through magical grounds of Fantasy Land – now available on Steam!

Legacies introduces a new playable faction, the cyborg Tinkers. The Tinkers are a race of cyborgs who worship Dzibix, an ancient mega machine located on their arid homeworld of the same name. Dzibix is — or was — an automated factory built by one of the ancient civilizations of the Golden Age.

The Tinkers worship Dzibix as a machine god and as result it has grown to cover most of the planet and has achieved at least minimal self-awareness. To appease their machine god the dutiful Tinkers have converted themselves into cyborgs and remade their society as a cybernetic civilization.

Tinkers’ ships have increased armor, self-repair capability, and special systems for handling missiles and fighters. The Tinkers will have a custom home world and a full set of custom spaceships to build, and will take special advantage of several new gameplay features.

Also joining the galaxy is new minor faction: the hyperspace-dwelling Arda Seed. The Arda Seed will employ a number of new starship and station types, and make special use of several new gameplay features.

The Arda Seed faction represents the next step in uncovering the story of the causes behind the Great War, which will continue to be expanded upon in upcoming DLC.

Cat on a Diet

Soft, fluffy, and a little on the chunky side — the podgy pussycat Dr. Meow can’t stop munching on delicious cookies and needs your help getting his greedy little paws on more! While his owner sleeps, steal away into the kitchen and help tumble this tubby tabby cat into the prized cookie jar.

Swipe and prod to claw away at wooden blocks, unscrew bolts, control powerful magnets and explode highly volatile uranium – anything to reach those cookies!

The hand that feeds?

What are the owners hiding from you? Find out as this pot-bellied kitty’s journey for sweet treats takes him up into the attic and down into the secret laboratory.

Munch all the snacks in each level and spend them on new power-ups, hats, masks and even more cookie-heisting helpers.