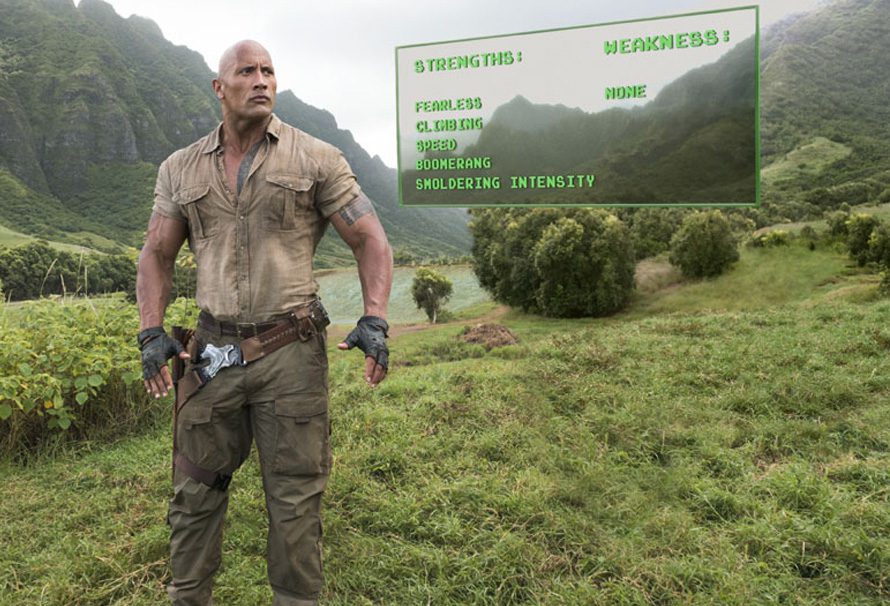 It’s been twenty years since the original Jumanji stampeded into cinemas, and since then the titular boardgame has been busy. Salvaged after the end of the original film by young Alex Vreeke in 1996 it realised that Alex wasn’t going to play it in its current form, so it morphed itself into a videogame.

This starts a series of events that eventually leads to another four young teenagers being trapped in its jungle world, twenty years later.

Jumanji: Welcome to the Jungle appears dismissable, it’s got almost nothing to do with the original, Robin Williams is of course, sadly deceased, and this film has every appearance of a throwaway cash-in, the sort we’ve seen a lot of in recent years.

But Jumanji: Welcome to the Jungle is more than that.

Jumanji: Welcome to the Jungle might very well be the best videogame film ever made. Here’s why:

The problem with a lot of videogame films, or films that feature videogames, is that they don’t ‘get’ the source material. Either it goes the Gamer route and everything’s just…stupid, or it goes in a route that often captures the storyline of the source material, but fails to capture the feel.

Jumanji: Welcome to the Jungle is an affectionate parody of videogames and videogame tropes. It’s clearly written by people who know videogames, and love them, and still want to send them up.

There’s NPCs, patrol routes, branching paths, and much more referenced in the film. Yes, that’s only superficial, but it lends an air of credibility to the whole thing. Whilst the film stretches those and creatively adapts what they are for cinema, that’s understandable and throughout the whole thing is actually fairly accurate. At least, for games from the 90s like the remake of Pitfall, Tomb Raider, and other games of the era.

But the most important thing, and the reason why this is probably the best videogame movie ever made is…

It’s Actually Not a Terrible Film

See this shouldn’t be an amazing thing but really, it is. It’s not controversial to say that most videogame movies are terrible, with only a few like some of the Resident Evil films and the first Silent Hill being ‘alright’, and some others like Warcraft or the Angelina Jolie Tomb Raider films being ‘enjoyable’. Every other videogame movie is dreadful, and to have one that’s so clearly inspired by videogames and yet actually watchable is a relief and sort of a revelation.

Part of this is the cast of course, The Rock is eminently watchable and Jack Black, Karen Gillen, and Kevin Hart all pull off their roles like they’re having the time of their lives.

That’s not to say the film doesn’t have its problems, the film does try to pillory videogames’ tendency to put women in saucy costumes…whilst also having a lady in a saucy costume for the film which doesn’t quite work, but overall it’s a damn fun adventure.

It’s also got a Jonas brother in it so that’ll keep some of you happy.

So there you have it, Jumanji: Welcome to the Jungle is a film that understands its source material, loves games, loves to parody them, and is also actually fun. Making this almost a first for the videogame film – a film that’s worth watching in a non-ironic way.

Jumanji: Welcome to the Jungle is well worth your time, and is definitely the best videogame movie ever made. Let’s see if Ready Player One can knock its crown off.