Ships, Guns and Gadgets - Your guide to looting in Everspace

If you are thinking of exploring the vastness of our universe in Everspace, you need to be prepared to rig your ship ready for the dangers of space. To get you prepared for the heat of its galactic dogfights, we have put together a primer so you know exactly what ships, guns, and gadgets will suit your playstyle. So strap yourself in, fire up your engines, and get ready to delve in.

The Colonial Interceptor is your well-balanced starting craft. It gets access to every primary weapon in Everspace, so you are free to kit it out as you wish. Its hull can withstand sufficient fire, even without shields, and it has the speed and mobility for impressive evasive maneuvers.

The Colonial Scout is a ship best used for guerilla warfare. Zip in and out with an invisibility cloak, or use the teleporter to close distance and escape from danger. Get in, cause damage, then retreat before your hull succumbs to the counter-attack. It is the fastest ship in the fleet and has the ability to upgrade both Sensors and Jump Charge Time. It is a glass cannon, capable of delivering high damage, but can break apart fast if not used correctly. Once its shields are down, you will be in big trouble.

This ship has a sturdy hull, which is just as well since you can not equip it with a regular shield. It is designed like a tank, capable of delivering massive amounts of damage with its array of front-facing weapons. This high damage comes at the cost of maneuverability - you can not escape from fights, so you need to be able to soak up damage and take down your enemies as fast as possible.

A DLC-only ship, the Colonial Sentinel is a prototype capable of using advanced experimental weaponry. It also gets access to an array of unique perks, allowing it to up its significant speed and even perform longer-range hacks.

In Everspace there are a large range of choices for your primary weapons, which are used for both combat and mining operations. It is up to you to find the ones that best suit your ship and playstyle.

These weapons have a high damage-per-seconds, with low-energy costs. The problem is, they are not capable of performing critical hits. They are more about sustained damage over time.

Firing in bursts, these weapons are like a shotgun - get in close and fire away, but keep an eye on your energy levels because they are thirstier than beam weapons.

When detecting nearby enemies, your Flak Cannons automatically detonate. This makes them well-suited to taking out drones.

These are your go-to weapons for taking down enemy shields as fast as possible. Once they are down, switch to something else to finish them off in a one-two combo.

If you are looking for a standard gun that tears an enemy’s hull apart, you can not go wrong with the Gatling. Use this when an enemy’s shields are down.

The energy equivalent of the Gatling, the Pulse Laser’s main function is to chip away at shield capacities.

Like a shotgun, this fires an angry swarm of shrapnel at your enemies. It is very accurate, but this is offset by a slow charge time.

Want to pick off your enemies at a distance? Well, this is Everspace’s sniper rifle. Be careful when charging it up, as it will not recharge until you have fired off a shot. 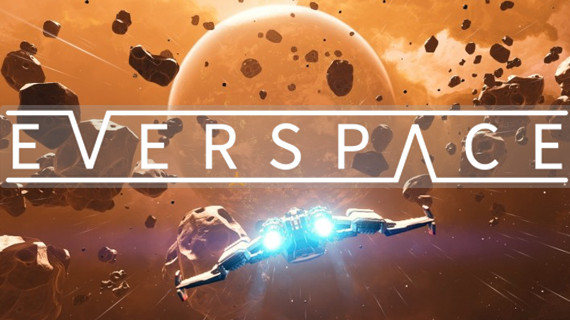