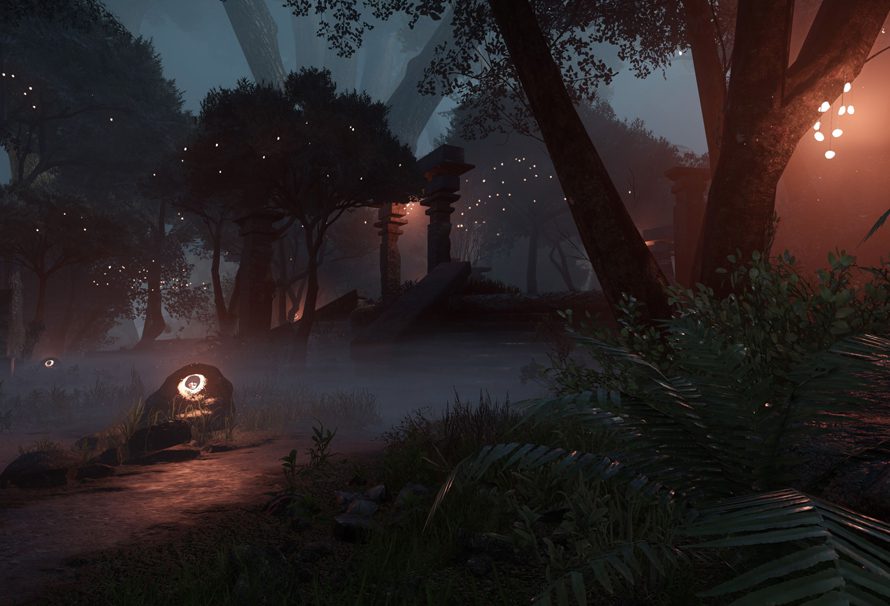 Story telling in video games has long been discussed by many a gamer. Whether a game submerges the player into a deep story or glances past a vague storyline to focus on gameplay, each game gamers play these days will tell a story. Aporia: Beyond The Valley, the next title from Developers Investigate North is heavily focused on story, but tells it in a truly unique way.

Aporia has a unique take on story telling that has been rarely seen in recent video games. Instead of relying on cutscenes or even dialogue to tell its story, the game conveys its narrative through the environment. Whether its through mysterious hieroglyphic-esque paintings on the walls to projected animations the player comes across whilst exploring foreign ancient technology, Aporia manages to tell its story and draw the player in.

The key mechanic in Aporia’s story telling is through projected animations, these low frame rate 2D animations act out the story of who you are, where you are and your purpose. The team behind the animations at Investigate North, told us that they spent a lot of time perfecting these animations. They mainly focused on the body language of the characters as they felt that body language was universal around the world and simple gestures would convey the message they are trying to put across. After some hands on time with the game, we can confirm that the animations do a great job of getting their point across. They also give a slight hint of ambiguity which can be interpreted however the player sees fit.

So what are the developers achieving when they set out to create a game with truly no dialogue? Investigate North stated to Green Man Gaming that they really want players to interpret the story in their own way and make their own hypothesis about the narrative and interpret it how they want. The developers feel that this is a unique way of story telling which will get players talking to each other and have conversations about their own take on Aporia’s story and share their experiences of the game.

One of the biggest challenges Investigate North came across however, was conveying the right message in the tutorial sections of the game. This was most apparent through focus groups which consisted of both gamers and non gamers testing the first section of the game out. Interestingly the developers found that the gamers were struggling more than the non gamers in regards to getting their head around how things worked. This was due to to the fact that gamers tend to skip tutorials, which I myself have been known to do on a regular basis. After a bit more testing and perfecting, the developers managed to crack the code in regards to giving an effective tutorial section without using dialogue.

In conclusion, Aporia: Beyond The Vally does exactly what it set out to do. Tell a story in a video game without the use of dialogue. The animations used to tell the story fit well in to the overall aesthetic and it is a true joy to play. We can’t wait to go deeper into the Aporia universe.

Aporia: Beyond the Valley - Videogames Are Better With Stories

Aporia: Beyond The Valley - Developer Walkthrough