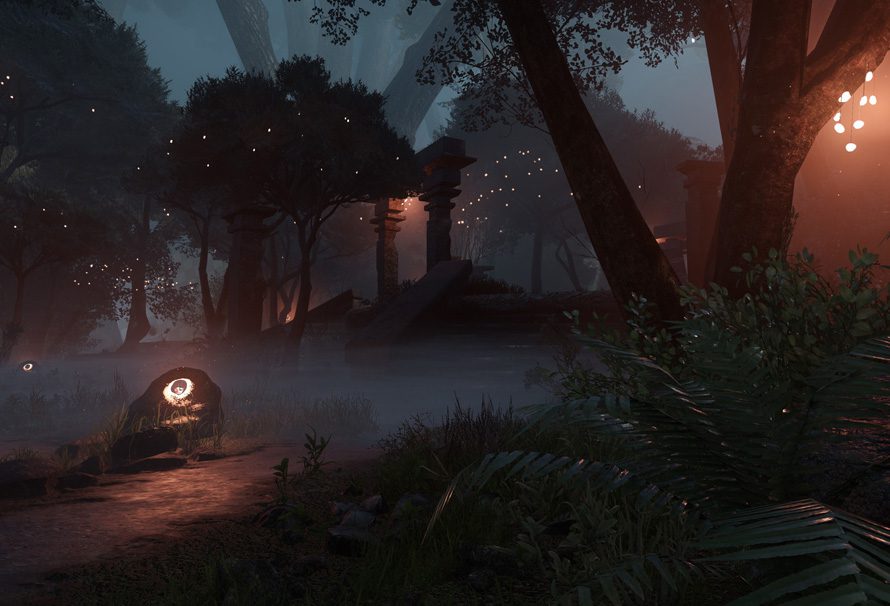 Aporia: Beyond the Valley is coming out on the 19th of July, and it is a first person puzzle adventure game that has a detailed and innovative narrative that tells a story without using words.

It’s important when you approach Aporia that you remember that, there’s a narrative there but you won’t have it laid out for you, it won’t necessarily be something you’re spoonfed. You might have to work for your story, not only by solving puzzles, but by putting together the narrative in your own head.

Recently the idea was floated that videogames are better without stories, that even at their best the stories in videogame are only at the young-adult level, and often there’s no reason a narrative needs to be in videogame form. The article argues that the level of interaction is so low in some videogames that you might as well be watching a film, so why not make a film instead?

This is Green Man Gaming so you can guess how we feel about this argument.

I believe that videogames offer something unique in allowing players to experience narratives, and even if sometimes the narrative unfurls inside the players’ head instead of onscreen, it’s still our interactions with the videogame that pushes the narrative onwards. Some stories cannot be told in any other format, because the videogame is essential to the story being told.

Aporia: Beyond the Valley is one of these games, it tells its story in a way that is entirely unique to videogames. You could have a similar narrative in a book or a film, but it wouldn’t capture the essence of Aporia’s story nor would you experience it in the same way. Videogames are not books, they are not films, and they shouldn’t pretend to be them, so it’s wonderful and exciting that games like Aporia: Beyond the Valley are pushing what videogames can achieve in a narrative sense to new levels.

Aporia: Beyond the Valley isn’t out quite yet, so here’s some other games that take their narratives just as seriously, and express themselves through the unique medium of videogames.

WARNING There will be spoilers for the following games below this point: Dear Esther, Gone Home, The Stanley Parable, Journey, Brothers: A Tale of Two Sons.

The poster child for the regrettable term ‘walking simulator’, Dear Esther started out life as a mod for Half Life 2 before creators The Chinese Room set up their own development studio and created a standalone Dear Esther. Dear Esther takes place on an island in the Hebrides…or does it?

As you wander the island a narrator provides snippets and ramblings, sometimes in order, sometimes out of any chronological order. You’re introduced to characters like Paul, Esther, and Saul on the road to Damascus as the narrator’s fever dreams speak to you as you walk across the island.

Dear Esther is often derided and dismissed from the pantheon of ‘videogames’ as it’s mechanics on one level can be seen to be simple, you walk across and underneath the island as you listen to audio and look about a bit. But to think that the game is that simple is to not engage with the true game, which happens in your mind.

These are all questions that should be pumping through your head as you play, and each person who plays will come out the other side of the game with their own theories on it all.

The reason why Dear Esther cannot be a film or a book or audioplay is that, outside of a couple of fixed points, the audio clues you hear in the game differ upon each play. The story I’ve made playing Dear Esther will be different to anyone else’s, and that’s something you cannot get with any other medium. It’s why Dear Esther is so very dear to me.

The poster child for internet hate groups who dislike videogames that don’t contain shooting, Gone Home is a narrative exploration game where you return home only to find your home abandoned, with no idea where your family has gone. Like Dear Esther, the story is put together largely in your mind as you play. Whilst things are made more clear for you than in Dear Esther, given that Dear Esther is entirely non-canon due to its nature, Gone Home still puts the onus on you, the player, to piece together the mystery at the heart of the story.

It’s essential that Gone Home be a videogame, because the story is woven into every inch of the house you explore over the course of the game. Without being able to explore and examine items, listen to the music, read the books, comment on things you find, you wouldn’t have the whole picture.

Yes you could make a film that shows someone coming home and shows them exploring, finding the clues that tell them what’s happened to their sister.

But would that film give you the full story? Would you feel scared as you step into the basement, full of stories of murders and kidnappings? Would you know the family as well you as you end up doing? Would you feel that sense of joy and relief as you find out what happened to your sister, without getting to know the entire family?

Only being a videogame lets the narrative breathe and sing like this, and only by letting you explore the space that the designers have created for you lets you experience this narrative fully.

You’re Stanley, you have a boring job and as you do it a narrator speaks your actions to you, often just before you do them.

That’s the setup for The Stanley Parable, but it’s the setup that leads to a thousand different permutations. The previous entries in this list had stories you had to piece together in your head which the game aided by speech or sound, or by visuals or context.

The Stanley Parable directly tells you a story, but it’s up to you how that story plays out.

The Stanley Parable is all about choice, will you follow what the narrator says you do, or will you try to break out, to see what else is possible, to bust out from the narrative that’s been written for you?

Choice in a narrative is something that almost no other medium can let you experience. If you watch a film, even if you make up your own mind about the story, you’re still coming out with the same experience as a million other people. In The Stanley Parable, you can rebel against the omnipresent narrator, and try to tell your own story.

It also helps that the game is incredibly funny, the wit and tone of the game is pitched absolutely perfectly.

The desert awaits you, and you travel across it in search of a mountain which you can glimpse in the distance, always pulling you closer.

Journey’s story is told through inference, you see images graven on nearby walls, you pass ruins of fallen civilisations, and you work together something that explains what you’re doing and where you’re going, and for some games that would be enough.

What Journey does, and what it does better than anything, is tell a story that’s built through your interactions with other players of the game.

During your wandering, other players similar to you will pop into the world and follow along on the same journey. They’ll leap about and chirrup with joy, illuminating the way, sometimes obstructing you, sometimes making the game go by too fast as they know the route, sometimes doing nothing much at all.

Because people are all different, it means that your experiences in the game and the story that you’ll tell of playing it will be different as you’ll have encountered a different person or series of persons in your journey to anyone else.

Your interactions are completely limited, to only little chirrups and moving about and jumping, but this is just enough for you to imbue your new friend with a personality. This lets you build a narrative, all of your own, of your journey and the people you shared your journey with.

This also helps the big emotional punches land, because when they land, they land hard.

Again this couldn’t happen outside of videogames. Even watching someone play Journey takes something away from the experience, yes you can feel joy and glee and sadness and wonder and horror from watching someone play this game, but it’s only by playing it, by experiencing it, and by sharing your journey with others, that you can truly build a narrative all your own.

The game builds a story with you, and you then become a storyteller, telling others of the experiences you had in Journey, and the unique adventures you had with your fellow travellers.

Two brothers head out on a quest to find a cure for their father who has recently become ill. That’s your setup and so far, so videogames.

What makes Brothers: A Tale of Two Sons work so well as not only a narrative but uniquely as a videogame narrative is how the controls and the narrative work perfectly together. Much is made by beard strokers like myself of ludonarrative dissonance, but this game is the example everyone should look to for the opposite. Ludonarrative resonance? Maybe.

Each brother is controlled by an analogue stick, and you progress through the game solving puzzles and going through the story together. One brother is bolder, older, more ready for adventure. The other is timid, young, and cannot swim. Only together can they get through the adventure and succeed.

Until the older brother dies.

Not only is it shocking and heartbreaking because you’ve spent a whole game getting to know these brothers and how they support each other and how they love each other so very much. It’s also shocking because soon after that happens, you have to cross a river. Something the younger brother could only ever do with the help of his older brother.

It’s a beautiful moment in a beautiful game, and something that just could not be told in another medium, at least not to the same devastating effect.

But when a game goes all out, when a videogame focuses on the narrative, it can make something unique to videogames. The games I’ve listed above are, in my mind, narrative experiences that not only wouldn’t work in other mediums, but would be diminished by removing the player from them. I believe, firmly and without reservation, that videogames not only benefit from having stories in them, but that stories benefit from being in videogames.

Aporia: Beyond the Valley isn’t out yet, but its story will be told without words in a way that’s unique to videogames. One day we might be talking about it in the same breath as Dear Esther, Journey et al. No matter how the game will be received, Aporia: Beyond the Valley is trying something new in videogame narratives, and that’s always something to be excited for.

Aporia: Beyond the Valley is available for pre-purchase now.